The Tornadoes are finally experiencing a winning season after years of futility. The memory of a former player helps fuel them. 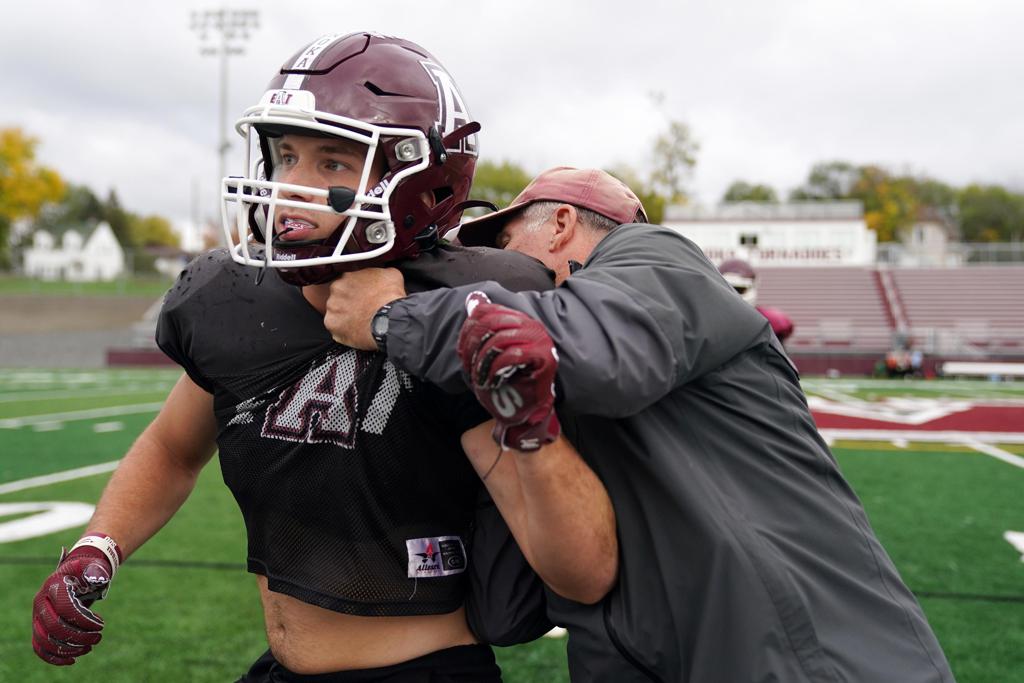 There’s a jump in the step of the Anoka football players that hasn’t been there in a long time.

Practices are spirited, players are energized. There’s no dragging from drill to drill, no lollygagging. Everyone seems genuinely excited to be there.

The reason? After enduring a four-year stretch in which the Tornadoes won a total of three games, success has dropped in on Anoka.

They lost their season opener to Shakopee, a team many believed to be among the best in the state, but then won four in a row before a second loss. It’s the longest winning streak Anoka has had since 2009, which is also the last time the Tornadoes finished above .500.

If winning cures all ills, as the saying goes, Anoka is feeling remarkably fit.

“Practice is a lot different. In the past, Anoka just hasn’t been excited at practices,” said senior captain Logan LaChance. “Now, after we’ve started to win, everyone wants to be here. We want to get better.”

To outside observers, Anoka’s surge to respectability may seem the result of Class 6A dividing itself into what is essentially upper and lower divisions for competitive purposes.

Third-year head coach Bo Wasurick, a former University of Minnesota tight end, stood outside the fence at Anoka’s Goodrich Field before a recent practice and soaked in the atmosphere as his players filed into the stadium.

“These guys want to be here,” he said with just a hint of satisfaction. “You can see it when they get here, how they listen, how they react.”

When he arrived three years ago, Wasurick soon realized he’d have to break through lingering disappointment before a turnaround could take place.

“Things had been pretty tough in the past. They had a lot of scars built up. We had to learn how to fight through that,” Wasurick said, adding that his players now are reaping the rewards of their work. “They see that ‘When I do what the coaches ask, what my teammates expect, we can be a good team.’ ”

Friday’s home game against Park of Cottage Grove is more than simply another chance to show how far Anoka has come. It’s the seventh game of the season, significant because the number 7 holds special meaning in Anoka football.

It was the jersey number of Dylan Witschen, who played for Anoka in the late 2000s. A seizure following a practice in 2008 revealed he had brain cancer. After surgery and aggressive treatment, he was cleared to play in 2009. Cancer returned, however, in a more aggressive form and Witschen died in 2010.

Witschen is remembered by the team for the seven characteristics he displayed: being a team player, leadership, compassion, determination, giving, confidence and strength.

In 2015, the team began a tradition of handing down Dylan’s number to the senior that best exemplifies those seven characteristics. Current Gophers’ linebacker Cody Lindenberg wore the number in 2019. LaChance earned it this year, calling it “the biggest honor of his high school career.”

Witschen’s memory is honored each week by the players and fans at Anoka, who hold up their hands and chant his name at the seven-minute mark of the fourth quarter. This week, they will unveil the Witschen Tunnel, an inflatable helmet through which the team will run onto the newly remodeled Goodrich Field.

Most of the players are too young to have known Witschen, but they certainly know who he was.

“Having that No. 7 and the image of it in my head has elevated my play a lot,” LaChance said. “There’s a saying that goes along with it. ‘Go hard, every play, till the play’s over. And, if you think you don’t have anything left, keep going.’ “

Despite not having coached him, Wasurick is happy to embrace Witschen’s legacy, which exemplifies everything he’s been preaching to his team.

“We tell our kids that you can’t control what happens to you, but you can control your response,” he said. “Our goal is to respond positively, because that’s what Dylan did with the time he had.”

While the season so far has been a rousing success by Anoka standards, it certainly hasn’t been perfect. They stumbled last week, losing to White Bear Lake.

The players say that loss was a splash of cold water, forcing them to recognize what brought them success in the first place.

“We settled back a little, with four wins,” admitted quarterback Jacob Deutchman, who is the metro leader with 1,470 passing yards. “We just need to get locked in and get back to what we were doing.”

Burandt concurred: “The loss made us realize we’re still not that good if we don’t play hard and work hard. Winning is awesome. We’re going to get back to that. Winning on Friday nights is the most fun you’ll ever have.”