See who fans voted as the top performer from Oct. 7-9. 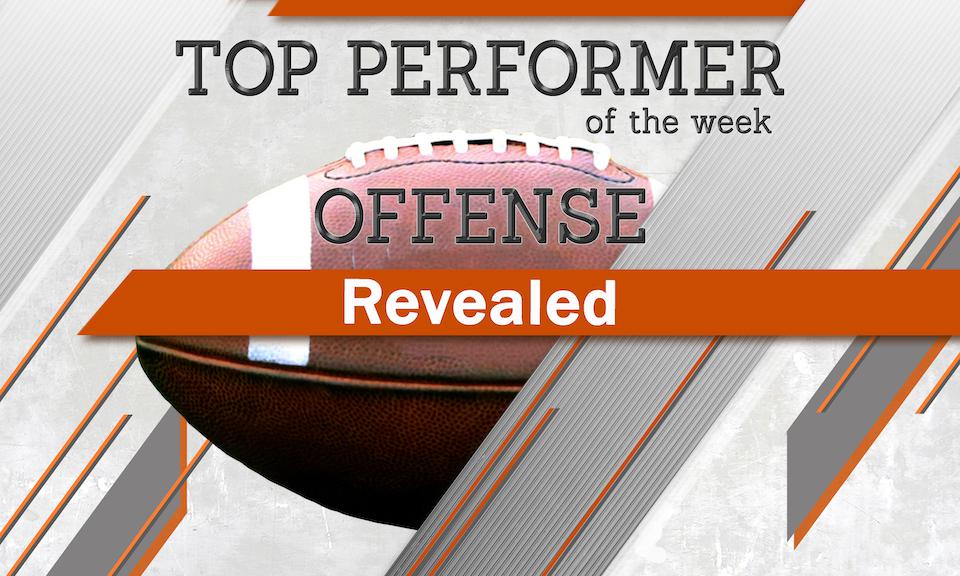 John Patros, St. Agnes. The senior had a strong start in the Aggies’ 39-38 win against Breck on Oct. 8. Patros recorded two kick return touchdowns in the first quarter, going 88 and 95 yards on those two touchdowns. Patros later added a third touchdown, taking 20 carries 109 yards and scoring a rushing touchdown to head the Aggies' offense.

George Bjellos, Woodbury. The sophomore quarterback accumulated over 300 total yards and five touchdowns en route to the Royals’ 55-21 victory at Park of Cottage Grove on Oct. 8. Bjellos went 13-for-19, throwing for 181 yards and four touchdowns. He added eight carries for a season-high 132 rushing yards, recording his first rushing touchdown of the season.

Jamarrius Courtney, Benilde-St. Margaret’s. The Red Knights put up a season-high 43 points—more than double the offense produced in their previous season high—led by the junior quarterback. Courtney completed a 27 passes for 260 passing yards and two touchdowns. He added three more touchdowns on the ground on 125 rushing yards and 21 carries. The Red Knights lost to Hill-Murray 49-43.

Carson Hansen, Lakeville South. The junior running back broke the 1,000 rushing yards mark on the season last week and sits third in the state with 1,053 rushing yards through six games. The Cougars earned a 25-13 victory against Prior Lake on Oct. 7 as Hansen took 18 carries for 260 yards, averaging 14.4 yards per carry. He recorded three touchdowns, including ones for 55 and 63 yards, to lead the Cougars’ win.

Emmett Johnson, Holy Angels. The state’s leading running back added to his dominating numbers this season during the Stars’ 49-25 defeat of St. Louis Park on Oct. 8. The senior had his most efficient running game of the season, averaging 17.3 yards per carry on 24 carries. He amassed 416 rushing yards, scoring five touchdowns, including three for 65 or more yards. He leads all players across the state with 1,453 rushing yards and 24 rushing touchdowns.

John Patros, St. Agnes. The senior had a strong start in the Aggies’ 39-38 win against Breck on Oct. 8. Patros recorded two kick return touchdowns in the first quarter, going 88 and 95 yards on those two touchdowns. Patros later added a third touchdown, taking 20 carries 109 yards and scoring a rushing touchdown to head the Aggies' offense.

Sanjay Redd, SMB. After two consecutive losses, the Wolfpack got back to their winning ways, putting up a season-high 56 points to defeat Richfield on Oct. 8. The Wolfpack were led by their senior running back, with Redd recording season highs in carries (28), rushing yards (256), and touchdowns (4) to lead the 56-35 victory. The Wolfpack won 56-35.

Dylan Rogers, Elk River. The Elks earned a narrow victory on Oct. 8 with their fourth 40-plus point performance of the season. The senior running back averaged 12.3 yards per carry and led the Elks with 222 rushing yards and four touchdowns in the 50-46 win. Three of his touchdowns were for over 50 yards — not out of the ordinary, as three of his touchdowns during the first five games of the season were for 45 or more yards.

Charlie Ryks, Breck. The senior quarterback started the Mustangs’ scoring last week with a short rushing touchdown mid-way through the game before recording five passing touchdowns. Ryks threw for 400 yards on 22 passes and completed back-to-back 50-plus yard touchdown passes in the second quarter, within less than one minute. The Mustangs lost to St. Agnes 39-38.

Sawyer Seidl, Hill-Murray. The junior took a season-high 38 carries for 333 rushing yards, averaging 11.2 yards per carry. He tallied six touchdowns — double his previous high this season — including his longest for 70 yards early in the second quarter to lead the Pioneer offense in the 49-43 victory. Seidl's 1,176 rushing yards this season is second most in the state.