The Cougars beat the Irish and stayed undefeated thanks to big runs from Carson Hansen. 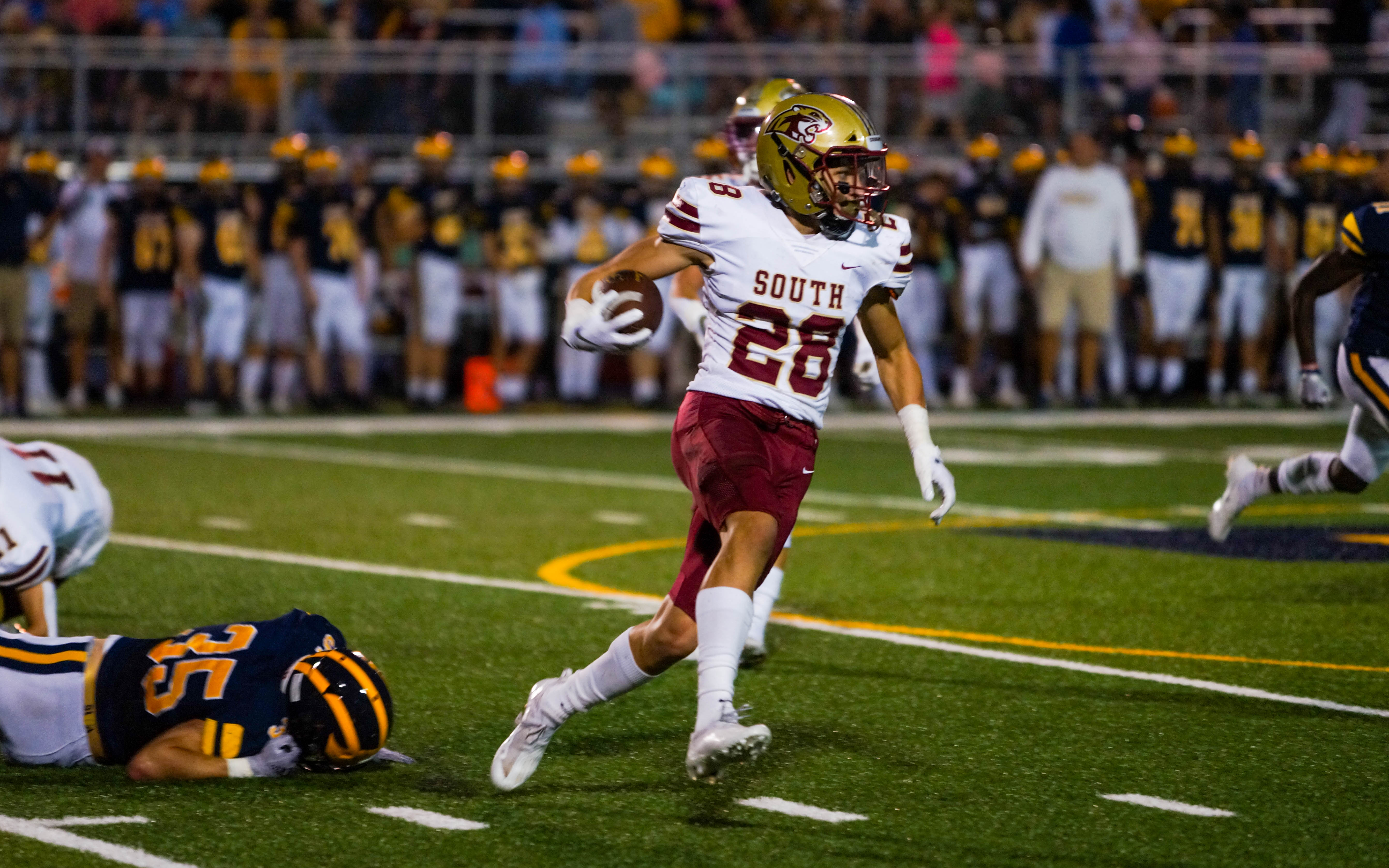 All he did, in his words, was run. Then he ran, and ran and ran some more.

Carson Hansen toted it 21 times for 225 yards and two touchdowns as Lakeville South dashed away from Rosemount for a 28-14 win Friday. He took a challenge from head coach Ben Burk at halftime and responded.

“I thought Carson Hansen did a great job,” Burk said. “I challenged him at the end of the first half that ‘you’ve got to be a special player for us’ and he came out and didn’t disappoint.”

Hansen rushed for 10 carries and 139 yards in the second half, most of which came in the third quarter, to help the Cougars’ ball-control offense to do its thing. 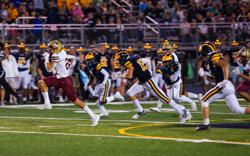 Lakeville South, ranked No. 1 in the Sept. 29 Class 6A Associated Press poll, scored first late in the first quarter when Hansen capped a 55-yard drive with a 22-yard touchdown rush.

No. 5 Rosemount went toe-to-toe with Lakeville South driving downfield and led halftime yardage 175-131. Turnovers were a killer for the Irish, who fumbled the ball away on their first drive.

Another fumble at the Cougars’ 5-yard-line stalled an early second quarter drive.

Lakeville South took advantage by driving 95 yards, picking up a third-and-21 conversion past midfield on a rare pass attempt from Camden Dean to Josh Jacobson. Ryder Patterson rushed for a 21-yard touchdown run and Hansen added the two-point rush to make it 14-0.

A 42-yard bomb from quarterback Vincent Pyne to Cedric Wall on fourth-and-10 gave Rosemount life to take a 14-7 deficit into halftime. Pyne's line ended at 9-for-17 passing for 164 yards with an interception and touchdown. He rushed three times for 33 yards.

The Irish feature plenty of size on the offensive line and were able to give Pyne time to find large chunk plays in the pass game. All six of his completed passes in the first half went for 10-plus yards.

“Rosemount is a very tough and physical team,” Burk said. “They do a great job as coaches getting their kids ready every week. We had this game eyeballed as a game that was going to be physical and we had to overcome adversity because they’re going to score points, do things we’re used to not seeing and they’re going to make plays.”

The Irish made plays, but also turned the ball over to give the Cougars momentum right back.

Meanwhile, the Cougars hadn’t turned the ball over all season until an interception and lost fumble came late in the game. They still won the turnover battle, 3-2.

“If you look at what championship teams do, they’re about plus-18 (turnover differential) playing in the state championship game,” Burk said. “That was our first turnover of the year. We preach ball security and creating takeaways so we can be in that plus category. Right now, I think we’re plus-eight.”

Lakeville South got its 6-foot-6, 235-pound senior tight end and Nebraska commit, Chase Androff, involved with a 31-yard reception. That set up a 1-yard quarterback sneak touchdown by Dean with 2:50 remaining in the third quarter.

The Cougars forced a punt on the ensuing drive before bleeding much of the clock. Dean finished 3-for-6 passing for 64 yards and an interception. He added a 23-yard rush to go with his sneak touchdown.

In the victory, the Cougars snapped an eight-game losing streak to the Irish. Rosemount’s other loss this season came last week to the third unbeaten squad from 2020, Eden Prairie.

“It feels great,” Hansen said of ending the Irish’s reign. “It’s been what, nine or 10 years? It feels great to win after that long.” 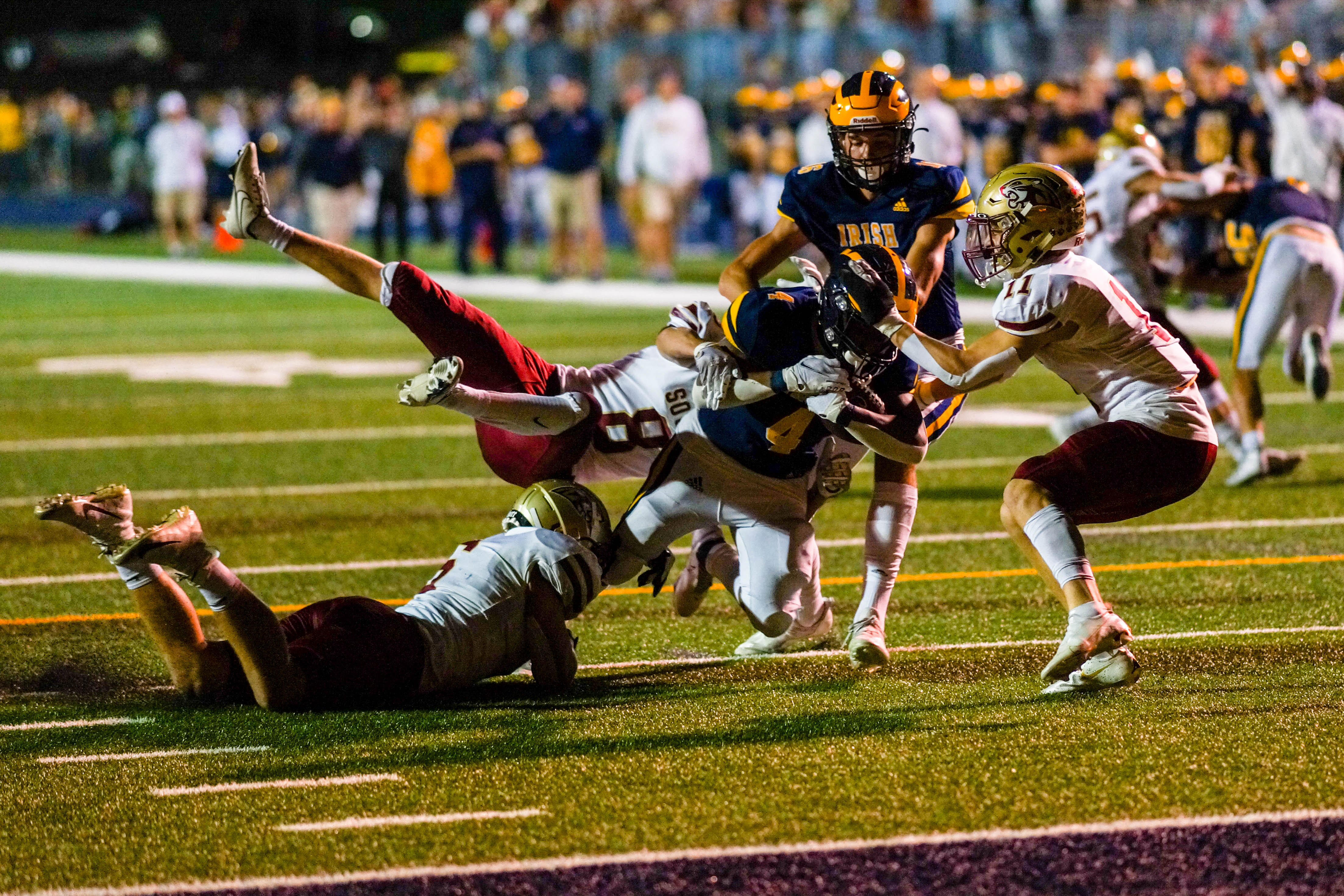 On homecoming night in Rosemount, Lakeville South stole the show with a 28-14 win Friday.

Lakeville South (5-0), ranked No. 1 in Class 6A in the Sept. 29 AP poll, took advantage of a short field on its second drive of the game, striking first late in the first quarter on a 22-yard touchdown rush by Carson Hansen.

No. 5 Rosemount (3-2) was driving in the red zone early in the second quarter before fumbling it away at the 5-yard line. The Cougars capitalized with a 95-yard drive ending in a 21-yard rushing touchdown by Ryder Patterson.

The Irish got the response it needed with a 42-yard deep ball touchdown on 4th-and-10 from Vincent Pyne to Cedric Wall with 1:27 left in the half.

Lakeville South took a 14-7 lead to halftime and extended it on the opening drive of the third quarter. Hansen ripped off a 57-yard touchdown rush to push the lead to 21-7.

The Irish used a pair of 25-yard rush plays to get back inside the red zone, only for a Ryder Patterson interception to stem the tide.

The Cougars put their stamp on the game, driving 85 yards ending in a Camden Dean 1-yard quarterback sneak touchdown to go up 28-7 with 2:50 remaining in the third quarter. 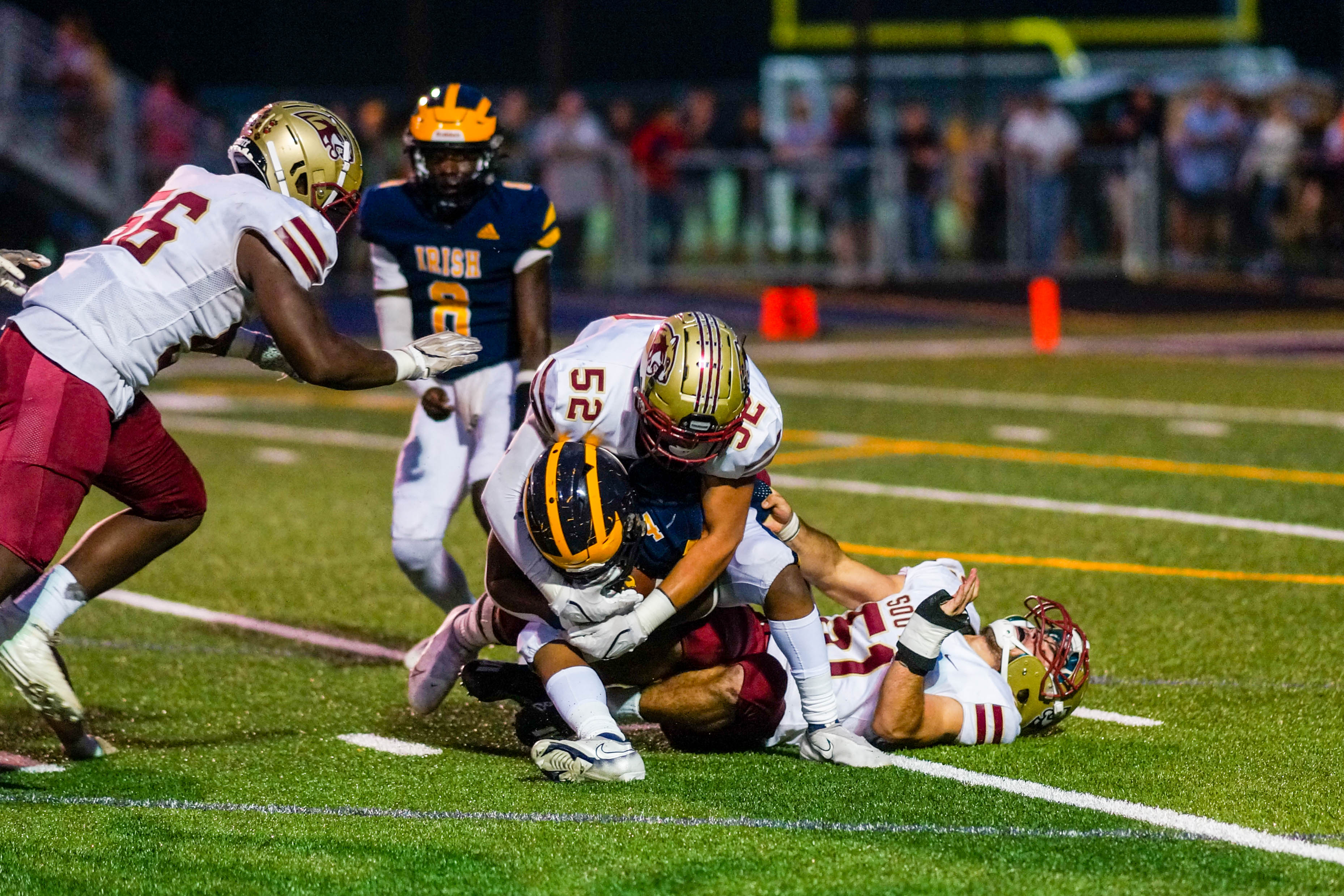