Running a wishbone attack, the Chargers wore down an upset-hungry Watertown-Mayer squad. 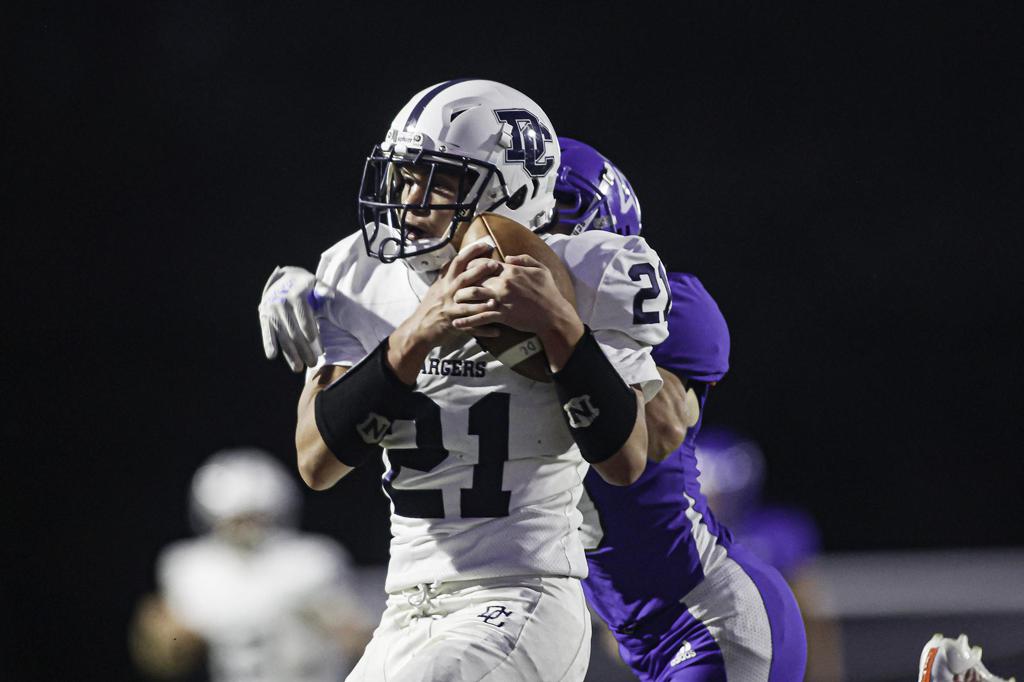 Dassel-Cokato receiver Devin Nguyen (21) comes down with a reception over Watertown-Mayer defender Wyatt McCabe in the first half. (Mark Hvidsten, SportsEngine)

Whenever Dassel-Cokato senior quarterback Gregory Clark took a snap during Friday’s game, those watching the action had to play a guessing game of sorts.

The Chargers, running a wishbone offense, featured a quarterback and three running backs for most plays. As each play was run with all four a threat to carry the ball, it was a guessing game when it came to who would have the ball at the end of each play.

This season, the four-headed rushing attack has paid off for Dassel-Cokato. That included Friday’s 29-14 win against Watertown-Mayer as the Chargers’ four rushers combined for more than 250 yards on the ground.

Clark spearheads the offense, with running backs Eli Gillman, Monte Gillman and Keyton Johnson taking the handoffs. All three finished Friday’s game with at least 13 carries. Eli Gillman, a senior running back committed to the University of Montana, was the leader on Friday with 29 carries for 89 yards and two touchdowns. He is one of seven starters who have returned from last season’s team.

“(Gillman) can carry a load for a while,” said Charger coach Ryan Weinandt. “We know we need to use other guys. You saw other guys run really well tonight.”

The rushing attack, along with one 30-yard touchdown pass from Clark, led to Dassel-Cokato jumping out to a 22-0 lead in the third quarter. The Charger defense stood strong as the Royals struggled to get past midfield during the first half.

Watertown-Mayer found its way back into the game with a passing attack led by junior quarterback Albert Rundell. He finished the game with 138 yards passing and two touchdowns.

“For us, we have to be more than just a running team,” said Dassel-Cokato coach Andrew Phillips. “We’ve found some guys who can catch and are a threat, which is huge.”

The Royals managed to make it a 15-point game with four minutes remaining in the fourth quarter but did not get the ball back as Dassel-Cokato’s running attack thwarted any potential Watertown-Mayer comeback.

Though the Royals suffered their first loss in 2021 on Friday, a 15-point loss to Dassel-Cokato is another sign of progress for an improving Watertown-Mayer program. A season ago, Watertown-Mayer fell to the Chargers, 45-0 during the regular season.

“Our senior leadership has done everything we’ve asked of them,” Phillips said. “They’ve bought into what we’re trying to do and it’s paying off for them.”

When it came to passing, quarterback Gregory Clark only completed two passes, the senior was effective both in the air and on the ground for Dassel-Cokato, ranked No. 7 in Class 3A by the Associated Press. His first pass was a 30-yard touchdown pass. He also ran for 56 yards.

On the other side, junior quarterback Albert Rundell had plenty of chances to show his arm for Watertown-Mayer (3-1, 1-1). He finished Friday’s game going 12-for-21 for 138 yards. Both of his touchdown passes went to junior Wyatt McCabe.

Senior running back Cole Lange was the Royals’ top rusher with 42 yards.