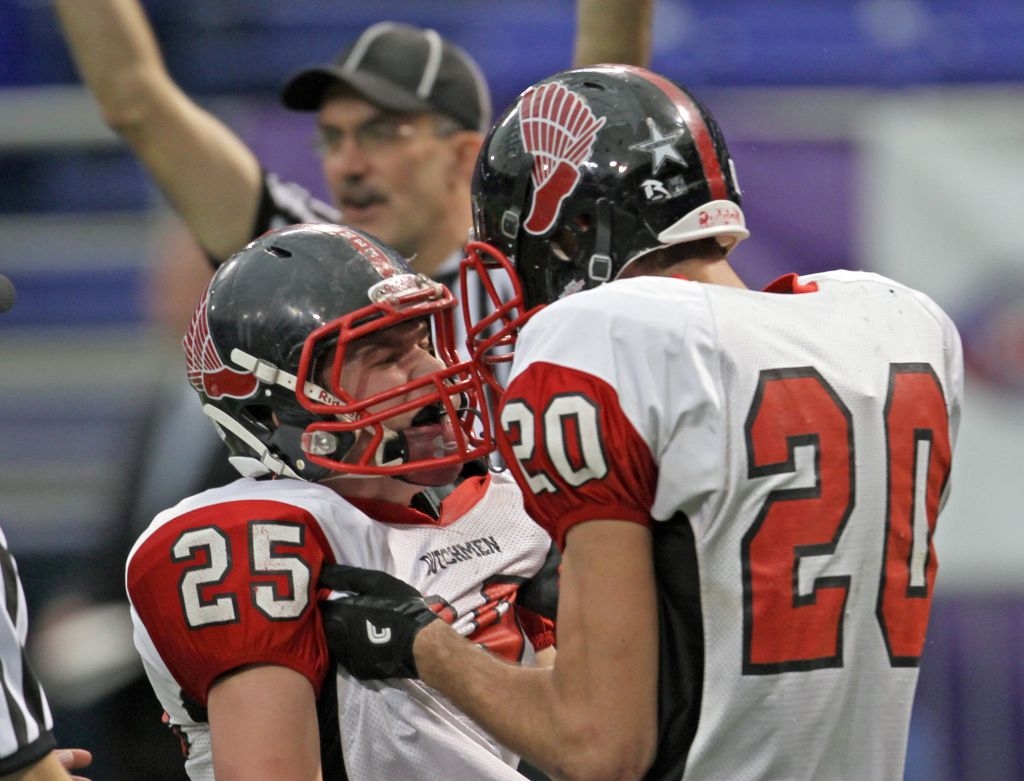 A picture might be worth a thousand words to some, but on the Edgerton/Ellsworth sideline images are gibberish.

Taking a page from the Oregon Ducks, the Pac-12 team that uses poster-board-sized placards of symbols and pictures as part of its play-calling tactics, Flying Dutchmen coaches decided to have some fun as well.

All that really matters to players on the field is which letter they see being held up during a no-huddle offense: A, AA or B.

But instead of just an "A" called in, a bright-colored poster with that letter is joined by pictures of the television characters Fat Albert, Alf and Arthur Fonzarelli.

Formation "AA" features pictures of actors David Hasselhoff and Charlie Sheen (you figure it out ...) and formation "B" depicts the Blue Falcon cartoon character.

The idea was the brainchild of coach Andrew Fleischman and assistant Dean Wieck, a kindergarten teacher.

"We had a blast gluing them all on there," Fleischman said. "The pictures mean absolutely nothing; the other assistant coaches think it's the stupidest thing in the world. But the kids get a kick out of it.

"Then again, maybe we need something more to do."

A grand and busy day

Perhaps no one had a busier Friday in the Metrodome cheering sections than MaryAnn Vipond. That's because Vipond, of Norcross, Minn., had grandsons playing in the Nine-Man (Tanner Kirkeide of Wheaton/Herman-Norcross) and Class 1A (Aaron Vipond of Mahnomen) Prep Bowls.

With its 35-20 victory over Mahnomen in Class 1A, Dawson-Boyd became the second team to win a Prep Bowl in its lone state tournament appearance.

Minnetonka won the Class 5A title in 2004

Caledonia on a roll

It's become as much of a tradition as winning Prep Bowls in Caledonia. The Warriors warm up before every game sans shoulder pads and jerseys, and spend the first few minutes on the field doing the "scoop and score" routine.

In short, players roll footballs back and forth about 10 yards apart.

"I know it's not traditional, but Coach [Carl] Fruechte came up with it, and he does more research than any man in America," Caledonia head coach Brent Schroeder said. "Any little tweak here or there can go a long way. We always want to be fast and furious and get to the ball."

No rest for Schilling

Casey Schilling made his presence known in the Nine-Man title game, hauling in seven catches for 82 yards and a touchdown, making six tackles and handling all the kicking duty in Edgerton/Ellsworth's victory. He'll get to bask in the glow of his efforts for all of two days.

"Monday's back to the hard court," he said.

Schilling is the last of three brothers to come through Ellsworth's boys' basketball program and will be a big part of this year's team. Now a senior, Casey Schilling won a championship with the Panthers as an eighth-grade bench player in 2008. He then helped Ellsworth to a third-place medal two years ago.

"But this is the best by far," he said. "It makes a huge difference when you're one of the playmakers."

Threw for a Prep Bowl record 368 yards and five touchdowns to lead the Flying Dutchmen to their first championship.

46.8 Average points scored by Moose Lake/Willow River in five previous playoff games before being shut out by Caledonia

"Later tonight, tomorrow maybe, it will start to sink in. I'm still thinking that we have a game to prepare for next week." - Dawson-Boyd coach Cory Larson