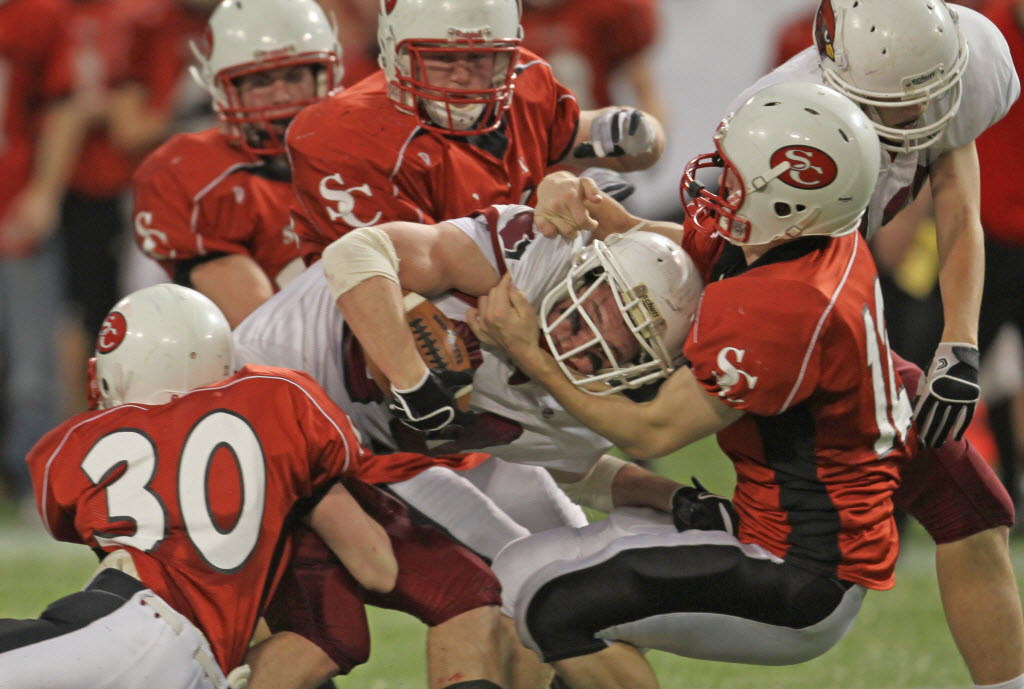 Fairmont's Alek Borchardt was gang tackled by the St. Croix Lutheran defenders in first half action of the Class 3A Prep Bowl on Saturday, Nov. 26, at the Metrodome in Minneapolis. Bruce Bisping, Star Tribune

The target was obvious, as it had been all game. The only question was whether St. Croix Lutheran would do anything about it.

When it mattered most, the Crusaders did what they had to do, knocking down a potential game-tying two-point conversion with 8 seconds left in the game, clinching a 34-32 victory over Fairmont for the Class 3A championship.

The play — Matt Olson swatting away a pass from Fairmont’s Ben Kain to his favorite target, Bryce Holm — put the finishing touches on an arrhythmia-inducing fourth quarter in which 30 points were scored and the lead changed hands three times.

“It was one of those games where you get to take a 5-second sigh of relief and then you had to go back out and do it again,” said Olson, who does double duty as the Crusaders quarterback.

The game was billed as a match up between St. Croix Lutheran’s running game and Fairmont’s passing attack. Neither disappointed.

The Crusaders (14-0) rushed for 353 yards, with halfbacks Wesley Tucker and Jackson Goplen each topping 100 yards. Tucker rushed for one touchdown, a 69-yard burst in the first quarter, and Goplen ran for two and caught a third.

Kain, who plays much bigger than his 5-9 frame, was missing one of his favorite receivers, Adam Schultz, suspended for the game after being thrown out of the Cardinals’ semifinal victory over Annandale.

But Holm stepped up to filled the void, catching eight passes for 163 yards and a Prep Bowl-record tying four touchdowns.

But it was an unexplainable failure that played over and over in Kain’s mind in the moments following the game, a fumbled snap deep in St. Croix territory that ended a fourth-quarter drive that appeared destined for the end zone.

“I just can’t stop thinking about that snap,” he said. “I don’t know what happened. We were so close.”

St. Croix Lutheran, leading by two points at the time, used the newfound momentum to extend the lead to 34-26 with less than two minutes to play on a 36-yard run by Goplen. But the Crusaders failed on the two-point conversion, opening a window for a Fairmont rally.

“Yes, I was very nervous about that,” St. Croix Lutheran coach Carl Lemke admitted. “We just didn’t match up well against their passing game.”

Kain drove Fairmont 59 yards in 1:37 without a timeout. They cut the lead to 34-32 on an 11-yard pass to Holm, setting up the tying two-point conversion try.

“We never stopped fighting, never gave up,” Goplen said. “Even when we’d get down, we knew we could come back. That’s what our team is all about.”

St. Croix Lutheran and Fairmont battled for the Class 3A championship Saturday, Nov. 26, at the Metrodome in Minneapolis, each in search of its first Prep Bowl title.

In a game of big plays, the Crusaders prevailed with a 34-32 triumph.

Wesley Tucker and Jackson Goplen each rushed for more than 100 yards.

Tucker got the Crusaders on the board with a 69-yard touchdown on the first play after Fairmont took a 7-0 lead on a Brandon Martin 14-yard score.

Cardinals quarterback Ben Kain hooked up with wide receiver Bryce Holm for four touchdowns, including one with eight seconds left in the game to give Fairmont a chance to tie the game on a two-point conversion attempt.

Kain's pass attempt fell incomplete on the conversion attempt and the Crusaders were able to recover an onside kick attempt and kneel down one time for their first state title.

Goplen had two rushing touchdowns and his only reception of the game was a 28-yard touchdown in the fourth quarter.

He followed that with a 36-yard score, which ended up being the winning score for the game.

Not a major force in the passing attack, quarterback Matt Olson for St. Croix Lutheran had two touchdowns of his own, one on the ground and one through the air.

Holm, not only tied a Preb Bowl record with four touchdown receptions, but had 163 receiving yards and helped Kain finish with 338 yards through the air on 17-29 passing.

1. Jackson Goplen, St. Croix Lutheran
The combo running back, linebacker was a playmaker for the Crusaders. The junior rushed for 101 yards and two touchdowns on 16 carries, while adding a third touchdown on a 28-yard pass. His clutch offensive play carried over on defense, where he tied for a team-high eight solo tackles and recovered a Fairmont fumble on the St. Croix 2.

2. Wesley Tucker, St. Croix Lutheran
Tucker proved to be a workhorse on the ground, piling up 180 yards and a touchdown on 16 carries. Tucker showed off his explosiveness early in the first quarter when he blew past the Fairmont defense for a 69-yard romp into the end zone. He averaged 11.2 yards per carry for the day. Tucker was tied with Goplen for a team-high eight solo tackles and added two sacks.
3. (Tie) Ben Kain and Bryce Holm, Fairmont
The Crusaders had no answer for this quarterback/wide receiver duo. Kain completed 17-29 passes for 338 yards and four touchdowns. All four TD passes went to Holm, who tied a Prep Bowl record for touchdown receptions, had 163 yards on eight catches. He had touchdown receptions of 50, 28, 23 and 11 yards.
-- Eric Ebert, MN Football Hub