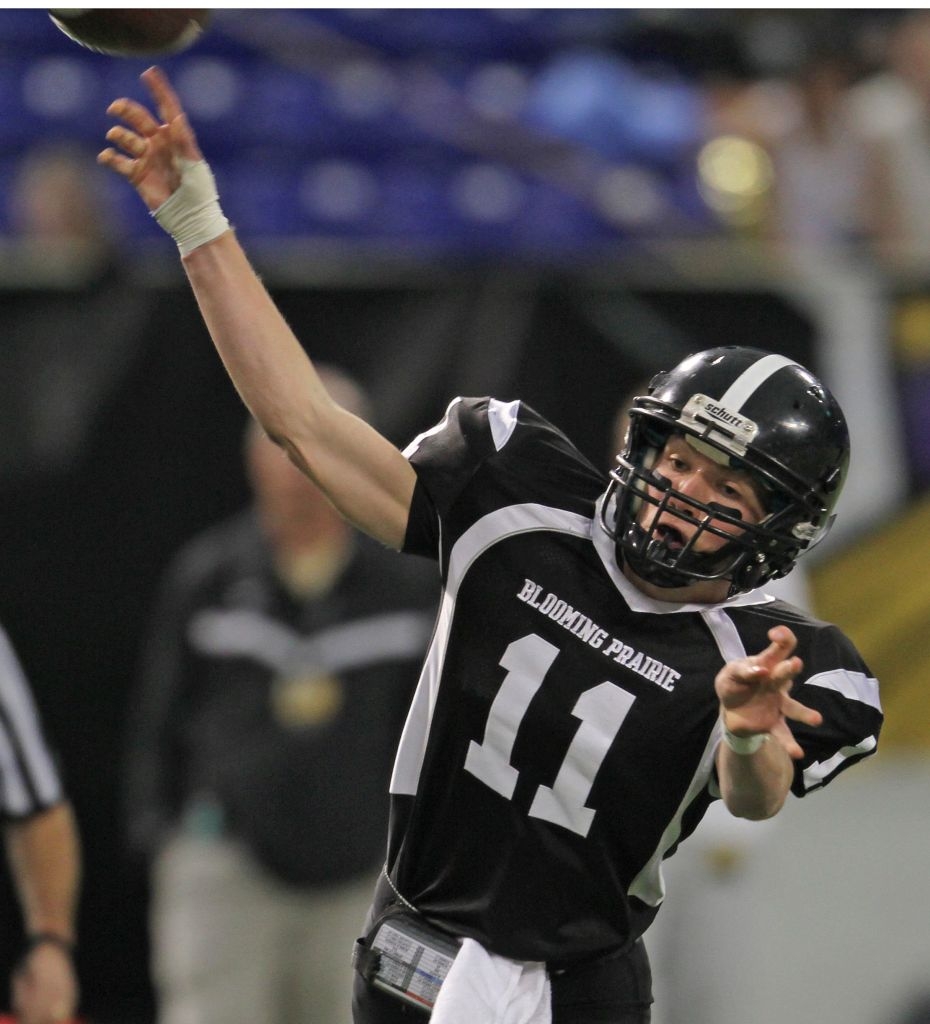 Blooming Prairie quarterback Luc Zellmer broke the state record for career touchdown passes with 102, including four on Saturday and 24 this season.

Luc Zellmer figures the blond mop of hair he has now will someday turn gray. And maybe by then he'll take a moment to stop and appreciate all he accomplished as a high school football player.

Zellmer's career came to an end at the Metrodome in the Class 1A semifinals as Blooming Prairie fell 50-27 to Dawson-Boyd. Zellmer threw for 168 yards and four touchdowns. The last score came on a 1-yard flick-of-the-wrist shovel pass to Jonny Kraling with 2:20 left. It gave Zellmer 102 career passing touchdowns, breaking Chris Meidt's state record set at Mahnomen from 1984-87.

Zellmer, though, wasn't interested in that number. Only the ones on the scoreboard.

"When I told him, 'You're going out there one more time, we're going to try to get you to break that record,' he kind of shook his head," Gimbel said. "I said, 'You've earned it.'"

Zellmer threw one touchdown as a freshman, then 77 as a sophomore and junior. He was well on his way to shattering the record this fall, but a broken thumb and injured shoulder kept him out of five games.

Providence Academy coach Nate Harrington played in the 1993 Prep Bowl with LeRoy-Ostrander. Though his Lions won't get the same chance this year after their loss in the Class 3A semis, Harrington preached all week about soaking up the atmosphere.

Providence Academy fans took up parts of three sections at the Metrodome on Saturday -- but not as many as Harrington remembers from 1993.

"LeRoy had about 900 people, and 898 of them showed up," he said. "All but the ambulance driver and the gas station attendant."

The distance between Class 2A semifinal foes Warroad and Caledonia is 508 miles. It's the sixth game this season Warroad has traveled more than four hours one way to play.

The alarms buzzed before 5 a.m. on Saturday, but by the time Wheaton/Herman-Norcross wrapped up its 62-22 Nine-man semifinal drubbing of Kittson County Central any tiredness was wiped away. The way the Warriors ran all over the field for 495 yards of total offense, you would have thought it was prime time.

The bulk of the offense came behind a superior six-touchdown effort by Wolfgang Brink, who beefed up for the early-morning game by devouring a barbecue meal Friday night.

"I don't know if that started his jets or what happened," assistant coach Shane Lee said.

"I'm screaming, 'He's inbounds!' But I have no idea." -- Hill-Murray coach Brooks Bollinger, on a two-point conversion call that went against the Pioneers