Big-school semifinalists have 19 state titles between them going into this weekend's games. 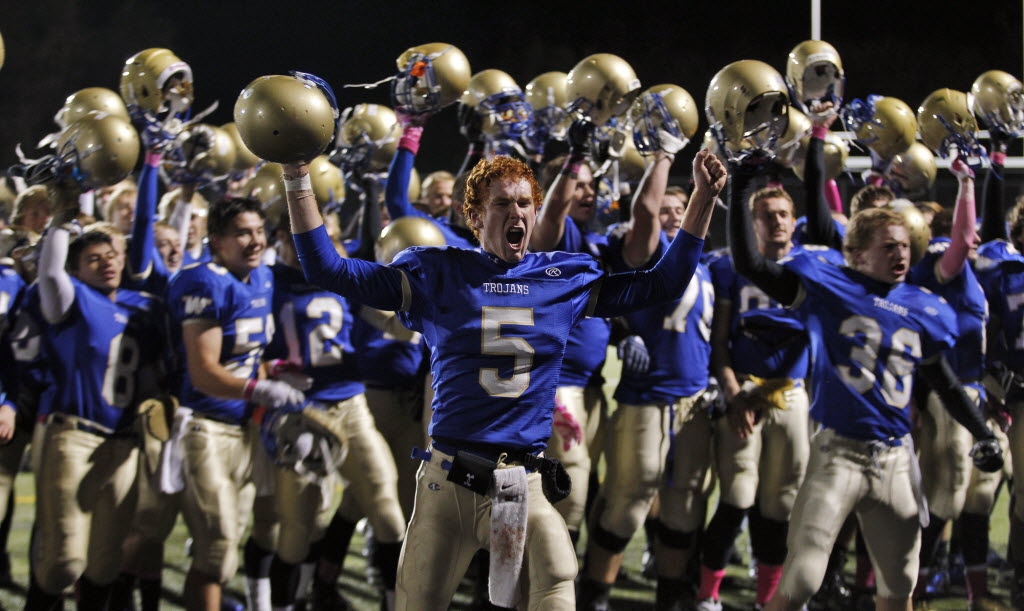 Wayzata players, including quarterback Nick Martin (5), celebrated their conference championship at the end of their 9-0 victory over Eden Prairie in the regular-season finale.

Out with friends earlier this week, Wayzata football coach Brad Anderson found himself unsure of what to say when asked about the upcoming Class 5A tournament semifinals.

No matter. The marquee matchups at the Metrodome speak for themselves. On Friday night, six-time big-school state champion Eden Prairie (10-1) takes on Totino-Grace (11-1) of Fridley, a program that has opted up after winning eight state titles in the second-largest class. Saturday night features a showdown between three-time Class 5A champion Wayzata (11-0) and Cretin-Derham Hall (11-0), a two-time winner.

The combined 19 state titles makes this the most prestigious final four ever. And next week will mark the 10th consecutive year at least one of these Fab Four programs wins a state title.

"I think people are drawn to sports when they are done well," Anderson said. "That's why we watch the Olympics every four years, even the sports we don't usually watch. I think that's what football fans will get this weekend."

Three state titles in the past six seasons -- the third coming last season -- gives No. 1 Wayzata an edge going into the semifinals. But Anderson recognizes the other programs' contributions to the Trojans' success.

Anderson took the Wayzata job in 1999 and saw Eden Prairie and Cretin-Derham Hall as the gold standards. The Eagles won titles in 1996 and 1997 while the Raiders capped their 10th consecutive state tournament appearance in 1999 with their first state title.

From 2002-04, Anderson's Trojans battled Totino-Grace in three nonconference games. Wayzata won all three meetings but the Eagles soared to two Class 4A titles during that span. Anderson took note.

"We've stole from all three of those teams," Anderson admitted.

Friday's opponents lack familiarity with each other, but Eden Prairie and Totino-Grace are well-known for winning a combined 12 state titles since 1996. Fans wondering how Totino-Grace stacks up against the Class 5A elite will get an answer.

"We've never been able to refer to ourselves as underdogs," Totino-Grace coach Jeff Ferguson said. "This year we can. Our kids aren't wide-eyed but they are tremendously excited."

The coaches downplayed the idea that matching up four power programs will generate broader interest in the tournament. Besides, their focus is squarely on this weekend.

"All four teams do their business each week no matter who they're playing," Eden Prairie coach Mike Grant said. "We've been telling our kids, 'They are champions and they will play like champions.' We think we will, too."