Leader of the Rebels 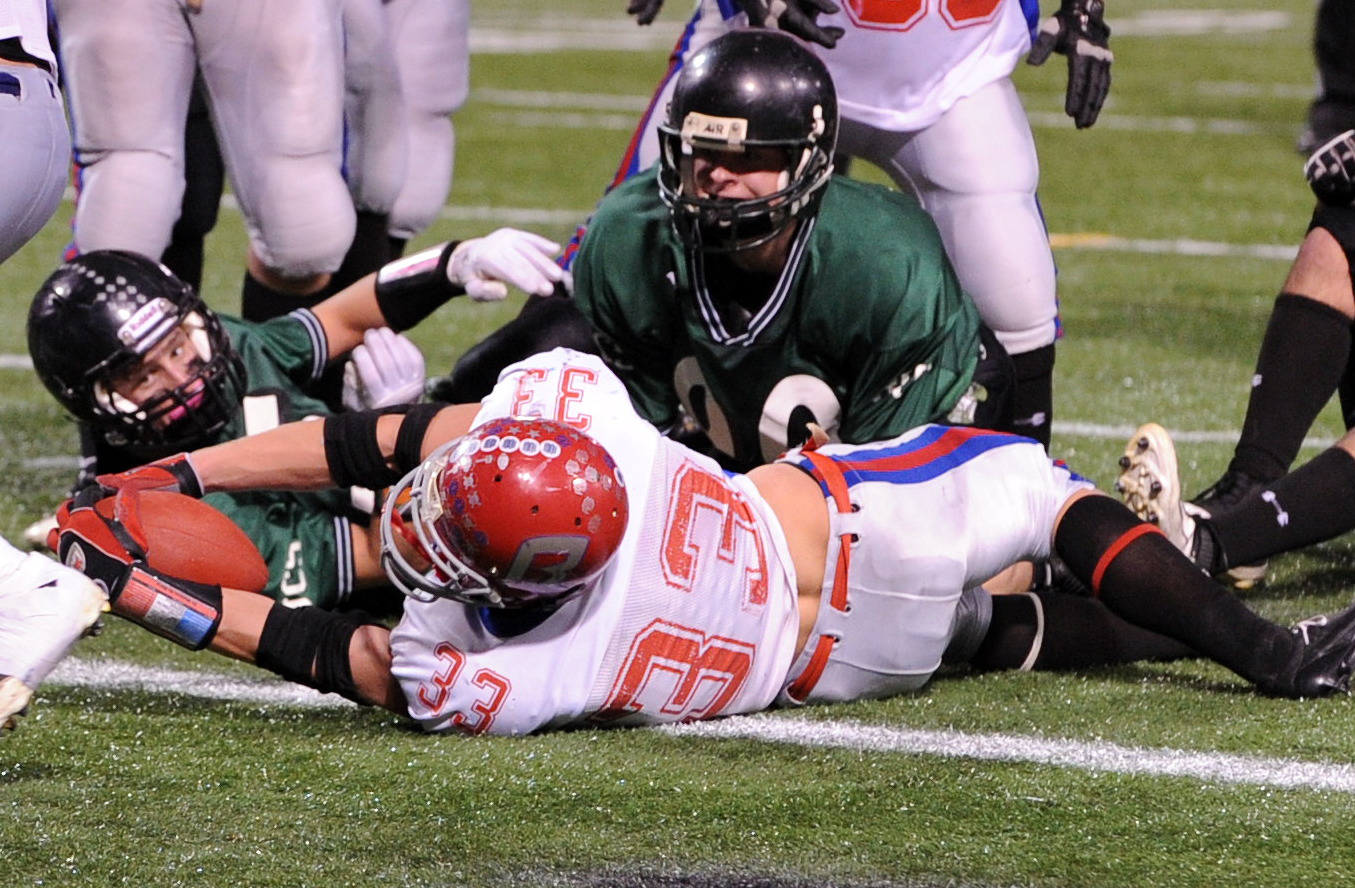 Moose Lake/Willow River running back Josh Cisar stretches into the end zone for a fourth quarter touchdown Friday, Nov. 18, during the Class 2A semifinals at the Metrodome in Minneapolis. Helen Nelson, MN Football Hub

To say that Jake Disterhaupt is important to his team would be an embarrassing understatement.

Disterhaupt scored four touchdowns on 244 yards rushing for Moose Lake/Willow River, leading his team to a 35-14 win over Waterville-Elysian-Morristown on Friday, Nov. 18, in the Class 2A semifinals at the Metrodome in Minneapolis.
On the opening drive, Disterhaupt set the tone for the game – as he's done all year – by rushing 80 yards to score on the first play from scrimmage. After Friday's game, Disterhaupt is averaging 15.4 yards-per-carry with 2,232 rushing yards for the season.
"It set a huge tempo," Disterhaupt said. "It gave us momentum right off the bat. It was huge to play a role in this game.
"We knew that their defense would be keying in on Jake," coach Dave Louzek said. "And for our offensive line to do what they did and still open holes for him and give him the opportunity to get those kind of runs is huge."
Beside the offensive play of Disterhaupt and the offensive line, the Rebels defense was able to hold the Buccaneers to two touchdowns.
"We're working on keeping track of their tight ends, playing better pass coverage and just improving every area of our defense," Louzek said.
The game also set the stage for a little payback for the Rebels. In 2009, they lost the Prep Bowl to the Buccaneers.
"It feels like a little taste of revenge," Disterhaupt said. "It just feels nice."
-- Jennifer Brook, MN Football Hub

Moose Lake/Willow River ran left, then ran right.
In fact, the Rebels ran themselves all the way into the Prep Bowl with a 35-14 win over Waterville-Elsyian-Morristown in the Friday, Nov. 18, Class 2A semifinals matchup at the Metrodome in Minneapolis.
W-E-M amassed 428 total yards on the ground and only attempted six passes.
What was peculiar about their success on the ground wasn’t that they decided to run nearly every time, but how they chose to do it.
In a formation described as a double wing offense by coach Dave Louzak, the Rebels lined up the majority of the game without any wide receivers.  Instead, they chose to run with two wing backs positioned at an angle facing the quarterback, and a regularly placed running back.
This means that on any given snap, the Rebels can hand it off to any of the three players in the backfield and the other two can block, creating spacing and misdirection problems for even the most disciplined of defenses.
“When we have three running backs like we have this year, a defense can't just stop the middle or stop the outsides because our fullback can be just as dangerous as both of our wing backs,” Louzak said. “It gives us lots of options as far as running the ball.”
Louzak first implemented the offense when he became head coach at Moose Lake/Willow River, 13 years ago.
With a combined enrollment of 318 students for the two schools, Louzak knew that to succeed would mean rejecting modern trends.
“Right away when I took over this program we went to this double wing," Louzak said. "The biggest reason is we don’t have to have our best athlete be our quarterback every year. We’re looking for great running backs. Lineman don't have to be very big, they just need to be strong and be able to pull and be able to run down the field.”
Coming into the game, the Rebels featured a three headed monster in the backfield between junior Jake Disterhaupt, senior Josh Cisar and senior Chris Gassert who have benefited from the dynamic scheme.
An argument could be made the offense was successful because of the talent of the running backs or because of the unique formation, but Louzak is split on the idea.
“It's a little bit of both,” he said. “If you look back on the past 13 years that we've run this we've had 1,000 yard rushers pretty much every year, so definitely this offense enhances our athlete's ability.
"Anybody who has any ability as a running back would love to be in this offense ... These three running backs we have this year are definitely special, probably the three best combination we’ve had ever, so it works both ways.”
--Walker Orenstein, MN Football Hub staff

1. Jake Disterhaupt, Moose Lake/Willow River
Disterhaupt has been on a run of epic proportions. Since the end of the regular season he has made a trip to the end zone 12 times, including four times tonight. He set the tone for the entire game when he broke an 80-yard run on his team's first play from scrimmage.

2. Josh Cisar, Moose Lake/Willow River
On top of being a big part of of the Rebel's running attack, he also came down with an interception and seven tackles. Whether he was running the ball up the middle or chasing down the ball carrier, he packed a wallop.
3. Caleb Schmidt, Moose Lake/Willow River
The Rebel's defensive effort could be credited to more than just one person, but Schmidt came through big in clutch situations. His two tackles for a loss along with a forced fumble led to Moose Lake points on the board when its offense took over with good field position.
-Jake Lunemann, MN Football Hub