Fairmont clutch when it counts

The Cardinals overcame sloppy play at times to hold off Annandale 21-9. 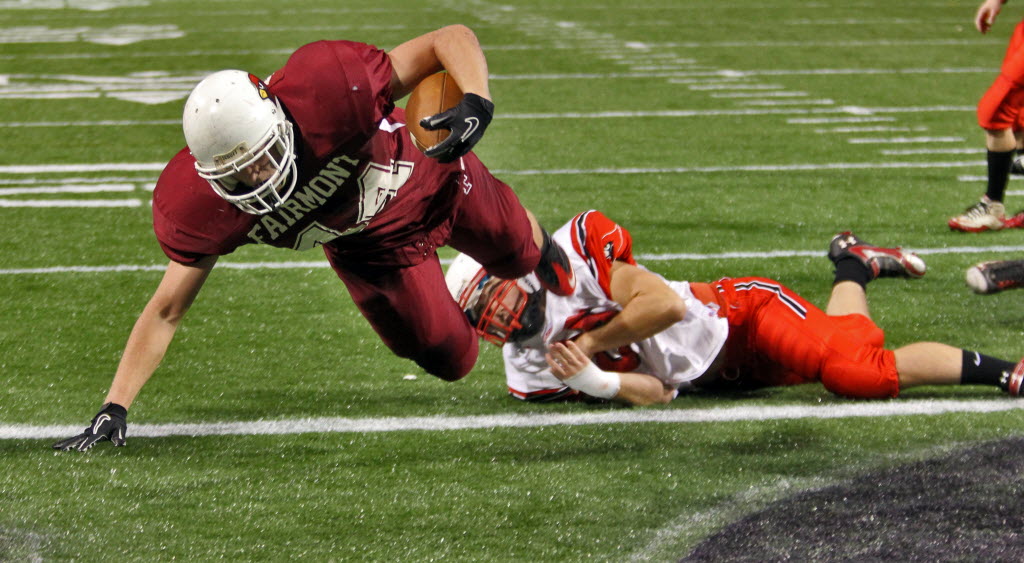 Fairmont running back Brandon Martin scored the second touchdown of the game beating Annandale defender Colt Lang on the first half run during the Class 3A semfinals Friday, Nov. 18, at the Metrodome in Minneapolis. Marlin Levison, Star Tribune

The Cardinals were inept at times during Friday’s Class 3A semifinal at the Metrodome, committing 10 penalties and five turnovers. They were also clutch, nailing down a 21-9 victory against Annandale late in the fourth quarter with their second interception return for a touchdown.

“This game was an emotional roller coaster,” coach Mat Mahoney said. “There was a lot of adversity out there … but I thought our boys did a nice job of keeping their poise and staying with it.”

Fairmont struck first on a tremendous effort from defensive end Justin Barnes. Annandale quarterback John Kalthoff turned to fire a quick screen toward a receiver but Barnes stabbed at the ball with his right hand and gathered it in with his left. Then he took off for a 58-yard touchdown return and a 6-0 Farimont lead.

“That kid can hop out of the gym,” Fairmont quarterback Ben Kain said of Barnes, a forward on the Cardinals basketball team. “And then runs like a deer.”

Kain made all the right moves to set up Fairmont’s second touchdown. He rolled out left, reversed field and eluded two Annandale defenders before “put everything I had into” a 32-yard completion to Adam Schultz at Annandale’s 18-yard line.

“A well-executed broken play is a good way to put it,” Kain said.

Annandale cut the lead to 14-2 in the third quarter by forcing Kain into a fumble he recovered in the end zone.

The victory sends Fairmont to its first Prep Bowl but Schultz will likely miss the game. He was ejected in the third quarter for throwing a punch after wrestling an Annandale player to secure a reception. Minnesota State High School League rules require an ejected player to sit out the next game. MSHSL board member Kevin Merkle said it is unlikely Schultz will be reinstated.

Mahoney takes his place in the history books

With a 21-9 win over Annandale, Fairmont coach Mat Mahoney has secured himself in the history books as the first coach in school history to lead his team to the Prep Bowl.

"It's an awesome feeling," Mahoney said. "I'm just very fortunate to have a great coaching staff, great players and a great community behind us."

For Mahoney, playing and coaching high school football is in his blood. His grandfather was a prep football coach for 27 years.

"Back then they didn't have the playoff system like they do now, but I'm sure he probably would have had a team or two playing in this."

Mahoney also has his own prep football experience to draw from as a coach.

He was the backup quarterback on the 1997 Fairmont team that made it to state.

"It's so much more fun watching these guys and watching all the energy their giving to us," Mahoney said. It's just fun to be part of it."

But the Prep Bowl berth may be marred by the fact that one of his star players, Adam Schultz, was ejected late in the game for allegedly punching an Annandale player.

Mahoney said that his team will look into appealing the decision.

"I thought he was getting up and then their guy came over and kind of grabbed him and he [Schultz] was just trying to get his hands off of him," Mahoney said. "Unfortunately, the refs saw something different and those are things we can't control."

Ejected player or not, nothing can mar the experience and words of wisdom Mahoney has for his team.

"Enjoy the moment," Mahoney said. Enjoy every single thing about it. This is something that not everybody gets the opportunity to do." 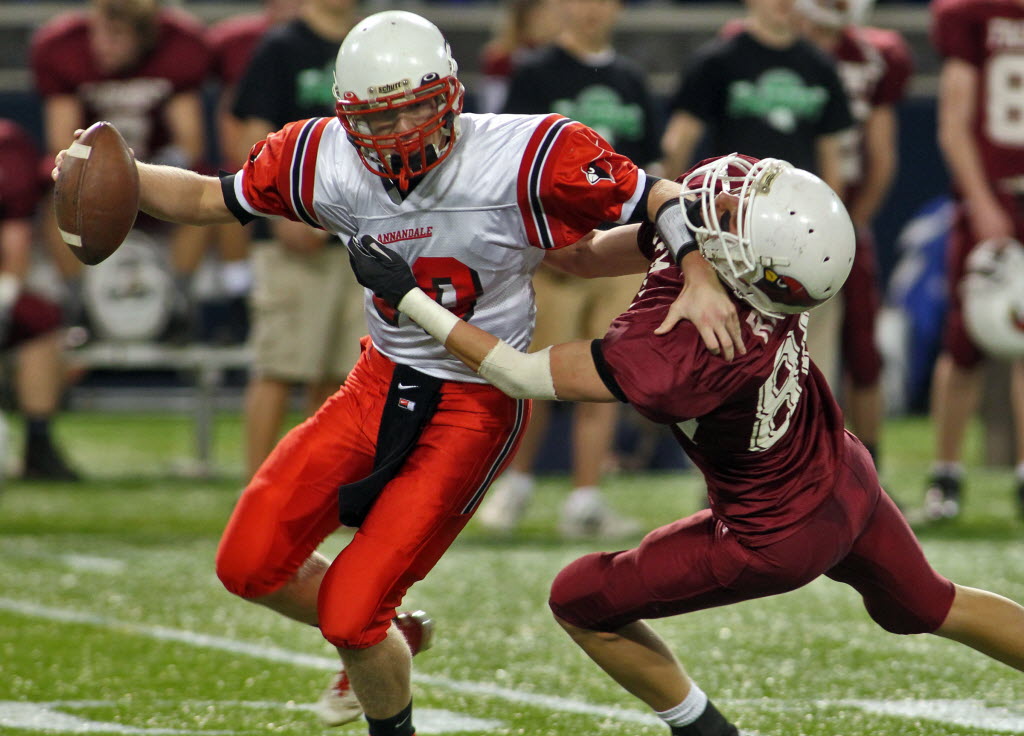 Fairmont's defense realized it needed to take control early in its 21-9 semifinal victory over Annandale on Friday, Nov. 18, at the Metrodome.
It started up front, as senior lineman Carson Ricard recorded two monstrous sacks in the first quarter, while fellow lineman Justin Barnes intercepted a pass and rumbled down the field for 58 yards and a touchdown to put Fairmont up 7-0.
“Our defense just started blowing it up and we just took control of the game,” Ricard said.
Ricard and the defense were responsible for 14 of Fairmont’s 21 points, including four sacks, four interceptions – two of which were touchdowns – and another two fumbles.
“We knew that they were gonna be a passing team so we had to shut them down in every aspect of it,” Ricard said. “Our lineman and our linebackers were getting their jobs done tonight.”
Along with putting points on the board, Fairmont did its best steel curtain imitation, holding Annandale to just nine points despite giving up 305 yards of offense. Two of Annandale’s points came from a safety, with the touchdown coming late in the game.
“We are a bend don’t break kind of defense,” coach Mat Mahoney said. “ We are gonna give up some plays but we're also gonna create some turnovers.”
Mahoney was understandably ecstatic about their play throughout the game.
“I cant say enough about our defense,” Mahoney said. “They were physical, they rushed hard to the quarterback, they put pressure on the quarterback, they just did an awesome job of making plays.”
Mahoney said there was much more to their success than just adrenaline.
“Well we kind of threw different looks at them, “ he said. “We are a four man front and we were kinda trying to give them as many different looks as possible and they didn't know where we were coming from all night. We were able to put pressure on them and make them force some turnovers.”
“It sounds kind of selfish, but we were getting stuff done,” Ricard said. “We know when we have to step it up and play ball.”
-- Walker Orenstein, MN Football Hub staff

1. Brandon Martin, Fairmont
There was not much to get excited about on offense in this game, but Martin was a bright spot. Between flags and turnovers, his bruising running style kept Fairmont drives alive.

2. Carson Ricard, Fairmont
With six tackles, three sacks, one forced fumble, and one pass deflection, Ricard was a strong presence all over the field.
3. Connor Froehlich, Annandale
Keeping with the theme of defense, Froehlich earns this star with his two sacks and one forced fumble. Annandale had seven tackles for a loss in this game and Froehlich was a force at the line of the scrimmage throughout this game.
-Jake Lunemann, MN Football Hub staff