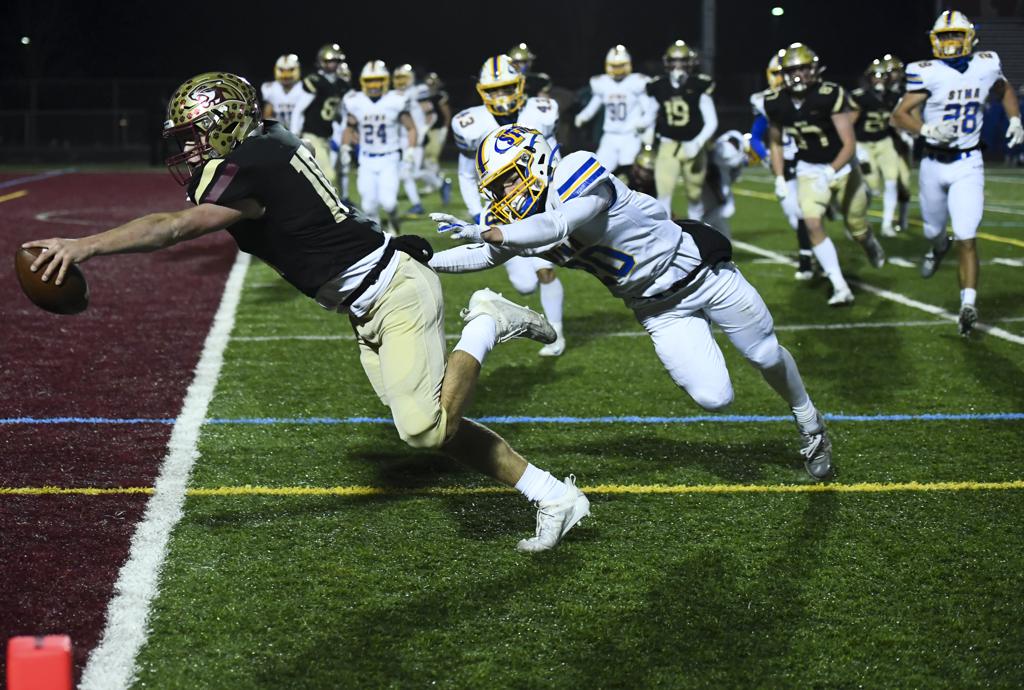 But the journey through a season marred by a global pandemic required the top-ranked Cougars to go a greater distance.

They built strength for their final drive last summer, in a makeshift weight room set up outdoors under the stadium bleachers. Earlier this week, their previously scheduled opponent, Edina, canceled because of COVID-19 concerns.

No. 4-ranked St. Michael-Albertville also needed an opponent after Minnetonka dropped out for the same reasons. Group text chats blew up as both the Cougars and Knights welcomed a high-stakes meeting. They got their wish Friday.

“We earned this,” senior center Derek Ashland declared to teammates as he held a Class 6A section champion trophy aloft.

Ashland voiced a much different message to teammates at halftime. St. Michael-Albertville stuffed the Cougars’ difficult power-T offense in a manner not expected from a team without much practice time. The Knights led 7-0 and held South to two punts, a turnover on downs and a missed field goal.

“We came out thinking we would punch them in the mouth, and they shocked us,” said Ashland, a team captain. “I told my guys, ‘This has to be a whole different game in the second half.’ ”

St. Michael-Albertville (6-2) kept up the pressure. A 14-play drive, heavy on David Collins and Max Keefer runs, built a 13-0 lead in the third quarter.

Then South (8-0) heeded Ashland’s call. A bootleg run by quarterback Reid Patterson cut the Cougars’ deficit to 13-7 on the fourth quarter’s first play.

Then a promising St. Michael-Albertville drive stalled as South’s defense slowed Collins and Keefer and punished the Knights with hurries or sacks on virtually every pass attempt.

A missed 42-yard field goal attempt gave the Cougars the ball. And they embarked on a 16-play drive, capped by a 2-yard Josh Jacobson touchdown run and Justin Loer’s extra point. South led by one with 20.9 seconds left.

“Our guys didn’t flinch when things didn’t go their way and that’s what I’m most proud of,” Cougars’ coach Ben Burk said. “In the face of a challenge, they rose to it.”

St. Michael-Albertville wasn’t done. A solid kick return and two pass plays later, the Knights earned a 40-yard field goal try with two seconds left. Before the kick, South defenders jumped up and down to try to distract Riley Purcell. They resumed jumping, this time in celebration, when Purcell’s strong kick just missed the mark.

“I’m just proud of the way we fought,” said Knights senior quarterback Jack Drobinski, who scored his team’s first touchdown. “I don’t think there are many teams in 6A that would play Lakeville South on such short notice. We were pumped. Everyone gave all the effort they had.”

The Cougars’ 16-play drive resulted in their second touchdown of the fourth quarter and made them a Class 6A section championship winner. But they had to sweat out a Knights’ 40-yard field goal try with two seconds remaining.

The Knights took a 7-0 lead in the first quarter when quarterback Jack Drobinski scored on a 10-yard run.

They extended the lead in the third quarter when Max Keefer scored from one yard out. A two-point conversion attempt failed, making it 13-0.

Cougars quarterback Reid Patterson scored on a 5-yard run on the first play of the fourth quarter to narrow the Knights' lead to 13-7.

That set the stage for the final drive, capped by a 2-yard touchdown by Josh Jacobson. The extra point kick by Justin Loehr gave the Cougars a 14-13 lead.