Spartans two games away from Class 4A title 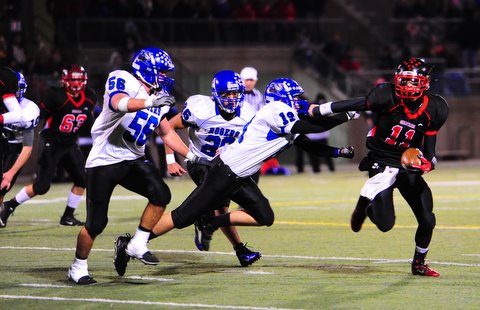 ST. CLOUD - Rocori has come a long way in a year.

After winning only two games all of last season, the Spartans now sit only two victories from a state championship after knocking off Rogers 17-6 in the Class 4A quarterfinals on Thursday night at Husky Stadium on the St. Cloud State campus.

Senior Sean Terres got the scoring started, hauling in a 10-yard pass from quarterback Nate Meyer to open the second quarter. Meyer later scored on a 1-yard run in the third quarter, pushing the lead to 14-0.

Both Meyer and Terres were key on the defensive side of the ball as well, each with an interception of Royals quarterback Matt Weber.

Rogers (9-2) pulled within a score in the fourth quarter on a rushing touchdown by senior Jack McGuire. But the Spartans answered with a field goal by senior Christian Pedroza on their next drive to seal the victory.

It was the 10th consecutive victory for Rocori (10-1), which hasn't been beaten since the season opener, a 28-20 loss to Class 5A Brainerd.

Rocori will meet the winner of Friday's game between Faribault (7-3) and Hill-Murray (8-2) in the semifinals Nov. 19 in the Metrodome. 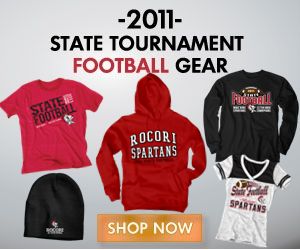 Class 4A matchup between Rocori and Rogers on Nov. 10, 2011 at St. Cloud State in St. Cloud. Submitted photos