The senior quarterback ran for three scores in the first half and added another late in the game to cap a 36-14 victory. 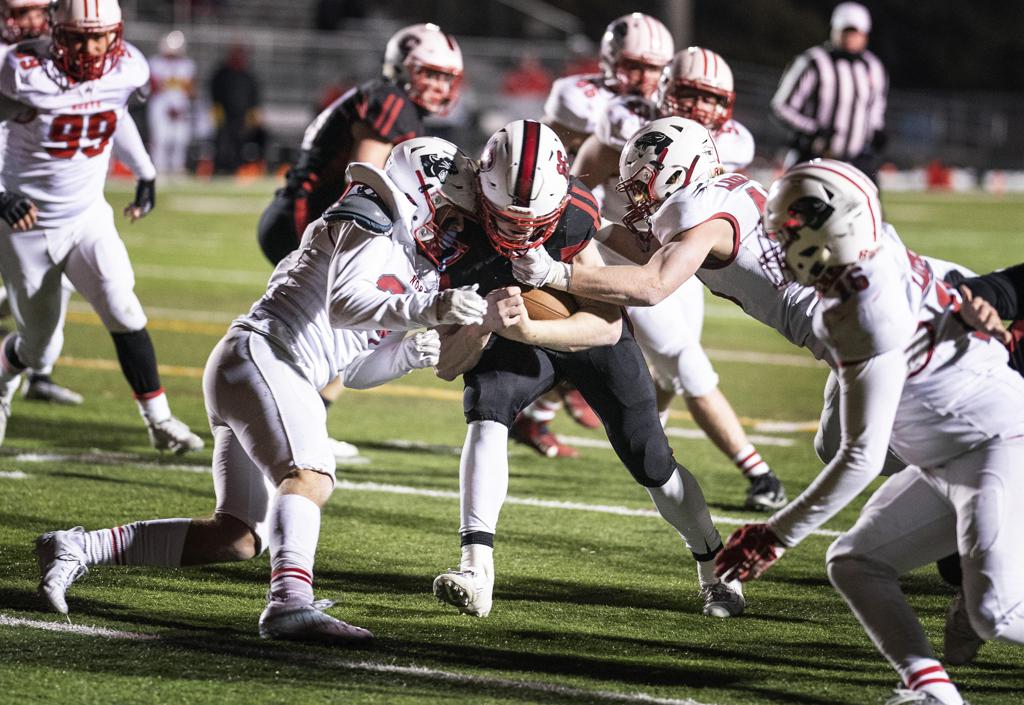 Centennial quarterback Elijah Ward ran for a second-quarter touchdown as he was hit by Lakeville North linebacker Noah Nephew in a Class 6A section playoff game Tuesday at Centennial. Photo: Jerry Holt •Jerry.Holt@startribune.com

Centennial coach Mike Diggins purposefully approached his team, which was waiting for him with giddy glee under the goal post in the west end zone after the host Cougars’ thoroughly convincing 36-14 victory over Lakeville North on Tuesday in the first round of the Class 6A playoffs.

Diggins gritted his teeth, threw a punch at the air and let out a guttural “Yeah!”

The Cougars cheered wildly, jubilant after their best effort of the season.

“We came to hit,” Diggins called to his troops. “They haven’t been hit like that all season.”

More wild cheering. Not only is Diggins a quality football coach, he knows how to reach his team.
Senior quarterback Elijah Ward led the way, scoring a career-high four touchdowns as the Cougars’ offense had its best output of the season.

“We have to be a tough team,” Diggins said in more reserved tones as his players walked off the field with a little extra bounce in their step. “We’ve only got four kids back from last year who even played a down. But we got better and better as the year was going. We said we’d be a tough out if everybody kept working.”

The Cougars (3-4) were the physically stronger team Tuesday. They scored on their first possession when Ward, adroitly running the zone-read offense, scored from five yards out. Four minutes later, after his defense stopped Lakeville North on downs, Ward ran 25 yards for a touchdown, giving the Cougars a 14-0 lead before the game was seven minutes old.

Perhaps the game’s most pivotal drive came on Lakeville North’s ensuring possession. The Panthers drove to the Centennial 8-yard line in 14 plays. But two incomplete passes forced a turnover on downs, Lakeville North coming away with no points.

Centennial scored again on a 13-play, 75-yard drive, another Ward touchdown leading to a 22-0 halftime lead.

Ward said he knew his team was ready before it took the field.

“There was an energy in the locker room,” said Ward, who was a linebacker as a sophomore and a defensive end last season before making the switch to quarterback. “It was too much. Too much for Lakeville North.”

The two teams traded touchdowns in the second half, with Centennial quashing any Lakeville North comeback hopes by answering both Panthers’ touchdowns with ones of their own. Their last was Ward’s fourth of the game.

Afterward, Ward echoed his coach, praising the simplicity of the Cougars’ game plan.

“We came out, played hard, hit ‘em,” he said matter-of-factly, with no trace of swagger in his voice. “We knew if we came out and hit them harder than anybody else, we were going to have a good outcome.”

Centennial, which improved to 3-4, is scheduled to play 5 p.m. Saturday at Stillwater, the top seed in the bracket.

Centennial quarterback Elijah Ward score a career-high four touchdowns to lead Centennial to a 36-14 victory over Lakeville North in the Class 6A playoffs Tuesday.

The Cougars scored twice in the first seven minutes of the game and led 22-0 at halftime.

Lakeville North rallied and had a chance to cut the lead to a single touchdown in the third quarter but failed on fourth-and-goal at the Centennial 10-yard line.

Centennial, which improved its record to 3-4, is scheduled to face Stillwater on Saturday. Lakeville North fell to 3-4.