Senior Shawn Shipman rushed for 195 yards and two touchdowns to lead the Rebels to a 34-8 victory. 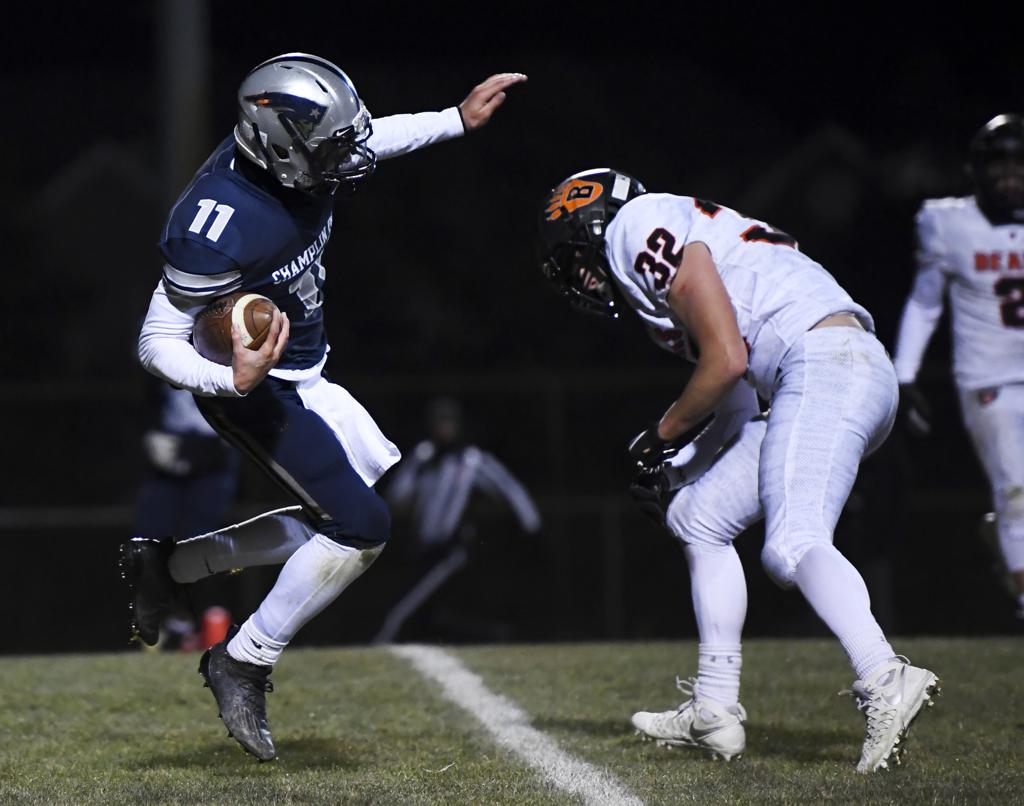 White Bear Lake coach Ryan Bartlett noted the 6-foot, 200-pound Shipman was “heavier than two of our starting defensive linemen. Between him and their huge offensive line, we were worried about that being an issue going into this game.”

The Rebels leveraged their size advantage in a 34-8 rout at home. Shipman’s inspired performance featured 195 yards on 27 carries and two touchdowns. Whether pounding between the tackles or taking option pitches with speed around the corner, Shipman carried the offense to success.

“He can run past you; he can run it down your throat,” junior quarterback Cade Fitzgerald said. “He can do it all.”

No. 3 seed Champlin Park (3-3) is scheduled to play at 7 p.m. Saturday at No. 2 seed Shakopee. Going into Tuesday, the Rebels had lost three consecutive games and had not played in 11 days because of a COVID-19 related break.

Any concerns about starting slow disappeared as Shipman tore off chunks of yards on each of his first four handoffs. He picked up 44 yards on four carries, including a 6-yard touchdown as the Rebels took a 7-0 lead.

“We got going right off the bat,” Fitzgerald said. “Our offensive line started moving some guys and it worked pretty well for us to run it straight at them.”

Fitzgerald doubled the lead in the second quarter with a 7-yard touchdown run.

No. 6 seed White Bear Lake (2-4), which scored an overtime victory last week against Woodbury, seemed poise to trim its deficit.

The Bears embarked on a promising drive from their 14-yard line. Converting twice on fourth down, one coming on a pass interference penalty, White Bear Lake reached the Champlin Park 19-yard line. But the drive ended with an incomplete pass on fourth down.

“That hurt because we had two plays where we could have scored there and then it’s 14-7,” Bartlett said. “We’ve been making those kind of plays this season; we just didn’t tonight.”

White Bear Lake avoided a shutout as senior quarterback Branden Berwald ran for a 3-yard touchdown with less than one minute left. But Bartlett took solace in a bigger victory. About 20% of football teams in Minnesota missed the playoffs because of COVID issues.

“Like I told the guys, ‘No one is really going to remember anything about this year except that you made it through,’ ” he said. “That’s what 2020 was about: adversity and how you responded to it.”

Led by senior running back Shawn Shipman, Champlin Park rolled to a 34-8 victory at home on Tuesday against White Bear Lake in the first round of the Class 6A football playoffs.

Shipman scored two rushing touchdowns for No. 3 seed Champlin Park (3-3), which had lost three consecutive games and had not played in 11 days coming into the game Tuesday. Shipman finished with 195 yards on 27 carries.

With the victory, the Rebels advance to play a scheduled 7 p.m. Saturday game at No. 2 seed Shakopee.

No. 6 seed White Bear Lake (2-4), which scored an overtime victory last week against Woodbury, couldn’t stop Shipman and also struggled to finish its own offensive possessions.