The Lakers exploded for 23 points in the second quarter en route to a 44-0 victory. 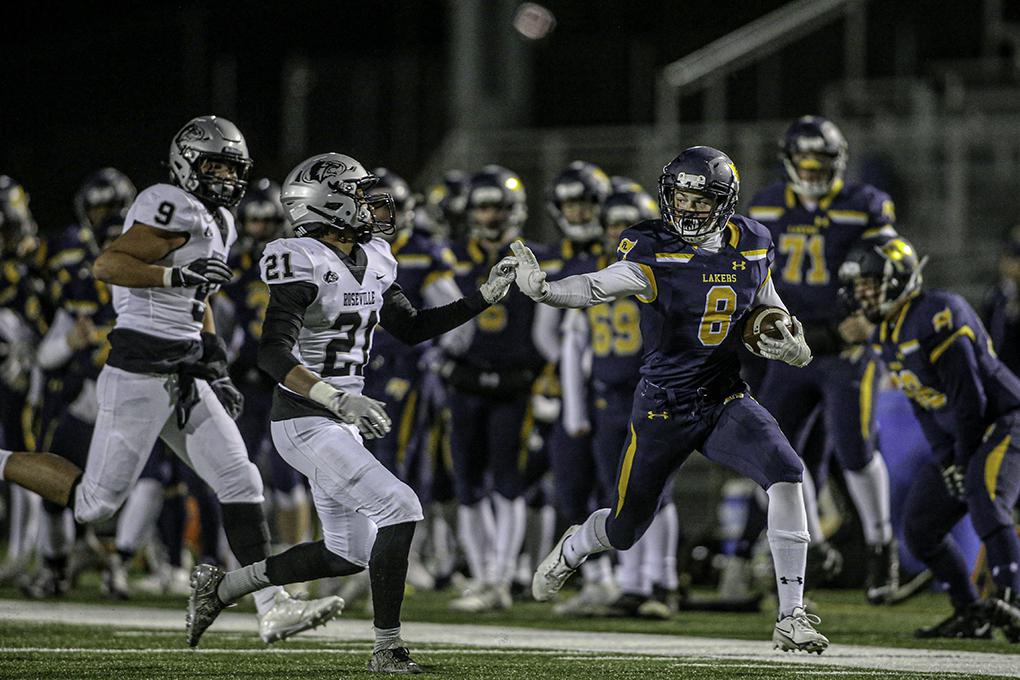 Prior Lake's Tyler Shaver (8) held off Roseville defender Treygan Adams (21) on his way to a long second-quarter touchdown. Photo by Mark Hvidsten, SportsEngine 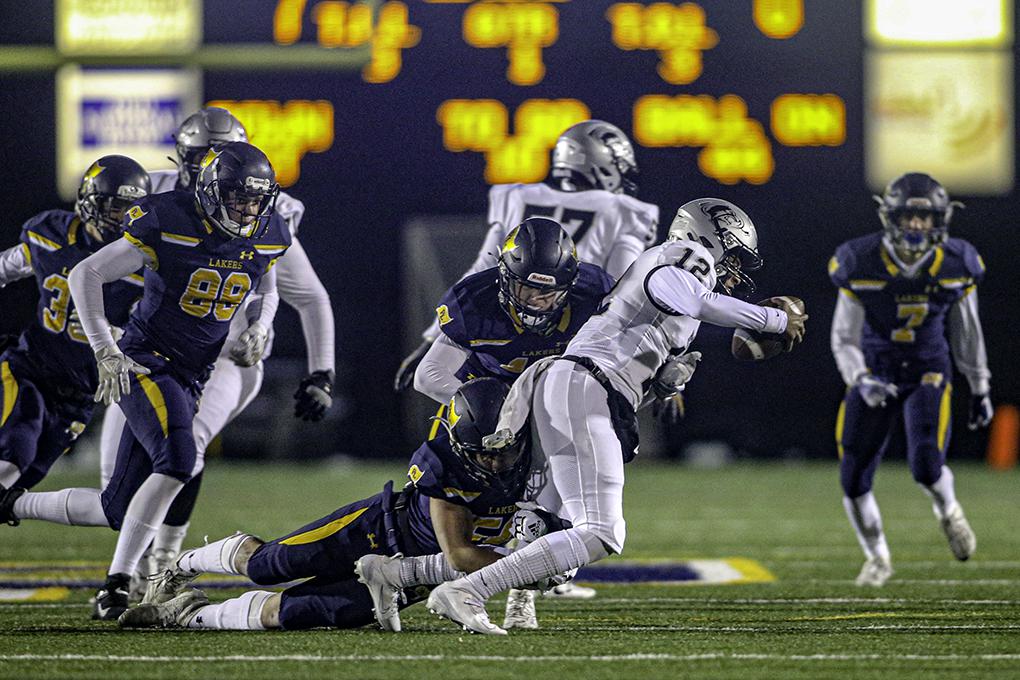 Roseville quarterback Kidus Belete is sacked by Prior Lake's Markus Knudsen in the second quarter. Photo by Mark Hvidsten, SportsEngine

With uncertainty swirling around the rest of the season, Prior Lake assured what it could on Tuesday: That the Lakers’ seniors would leave their home Dan Patch Stadium with heads held high.

The COVID-19 pandemic may throw a wrench into the rest of the prep football playoffs in Minnesota, given Governor Walz is expected to add additional restrictions in the coming days to help address surging positive cases, but No. 4 seed Prior Lake handled its business in round one Tuesday, defeating No. 5 seed Roseville 44-0.

“We’ve been fortunate to play seven games now and not everyone’s been able to do that,” said Prior Lake coach Matt Gegenheimer. “We knew this was going to be the last time our seniors played on this field. That was a big deal and that was pretty much motivation enough for those guys.”

The winner was slated to take on No. 1 seed Eden Prairie on the road 5 p.m. Saturday, so this meant the Lakers knew they were going to play elsewhere with a victory.

Lakers running back Tyler Shaver was among those in the locker room who gave pregame senior speeches to his teammates and coaches. 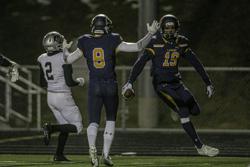 Photo Gallery: Roseville vs Prior Lake

“I just talked about everything when we were little kids up to now. How it’s really special for our seniors,” Shaver said. “How we’ve grown each year and how we’ve bonded. How we’ve come together every single season up ’til now.”

Shaver led all rushers with 109 yards on 16 carries with a touchdown.

Roseville (2-4) entered Tuesday winners of two of its last three games. It was without one of two regular quarterbacks, senior Ricky Weber and 19-year head coach Chris Simdorn, among others. Defensive coordinator Mike Grant has been on Simdorn’s staff since 2001 and was acting head coach.

Roseville mustered just 40 yards in the first half, all on the ground, with 31 yards coming from senior running back Anthony Vo.

Prior Lake (4-3) bounced back from its lone turnover of the game by driving 75 yards for a touchdown with 2 minutes, 26 seconds left in the first quarter. Cam Miller, committed to University of Minnesota Duluth, capped the drive with a 1-yard TD.

The Lakers quickly got the ball back and scored on the first play of the second quarter. Shaver patiently waited for his blockers ahead, rushing left and turning it up down the sideline for a 52-yard tip-toeing touchdown.

“The perimeter blocking tonight was really great,” said Shaver, a Bemidji State commit. “It’s great when we get the run game going because that just opens up the pass game and the boots are open. Haas, if he gets going, you can’t stop him.”

Haas did get going.

He hit on a 2-yard touchdown pass to Jacob Anderson and again from 30 yards to Kyle McCullough in the second quarter. The latter showed Haas’ improvisation ability, scrambling to his left and directing traffic before delivering the throw.

A 30-0 halftime lead kept growing in the third quarter when Haas called his own number for a 3-yard touchdown. Later, Roseville was pinned deep in its territory when a high snap trickled into the end zone and into the hands of Prior Lake’s Preston Swartz for a TD.

The Lakers played perhaps the toughest schedule in Class 6A. Their three losses were to Lakeville South, St. Michael-Albertville and Eden Prairie, all of which were ranked at the time at Nos. 1, 3 and 2 respectively in last week’s Associated Press statewide poll.

“We’ve played a lot of good teams this year and we continue to battle and fight,” Gegenheimer said. “Once the guys got rolling I thought they did a great job of keeping momentum. They all played well over four quarters.”

In the opening round of the Class 6A playoffs, Prior Lake flexed its muscles in a 44-0 win over visiting Roseville on Tuesday night.

Running back Cam Miller rushed in for a 1-yard score and added a pair of two-point conversions in the first half. His touchdown put No. 4-seed Prior Lake (4-3) ahead 7-0 late in the first quarter.

The Lakers added on when Miller’s backfield mate, Tyler Shaver, tiptoed down the sideline for a 52-yard touchdown rush on the first play of the second quarter.

Prior Lake quarterback Kyle Haas responded from an interception on the opening drive. He connected with Jacob Anderson for a 2-yard TD and showed off his scrambling skills later in the second quarter to find Kyle McCullough for a 30-yard strike. The two passing touchdowns came in the final five minutes of the first half.

Prior Lake led 30-0 at halftime against a No. 5 seed Roseville squad (2-4) that averaged 13.4 points per game. The Raider offense struggled to find its rhythm as it dealt with losses due to COVID-19 protocols throughout the roster, including head coach Chris Simdorn. Defensive coordinator Mike Grant was acting head coach for Roseville. 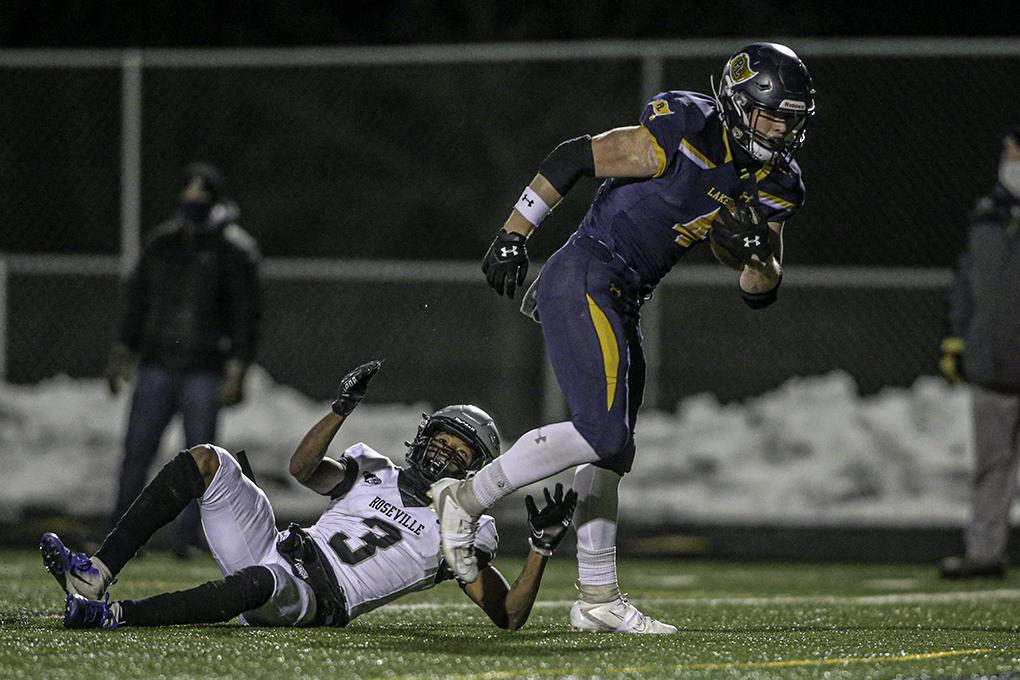 Prior Lake's Cameron Miller ran over Roseville's Teris Watson (3) on his way to the game's first touchdown. Photo by Mark Hvidsten, SportsEngine