The Tigers' Zac Janz rushed for three touchdowns and the defense forced punts on five of eight Panther possessions. 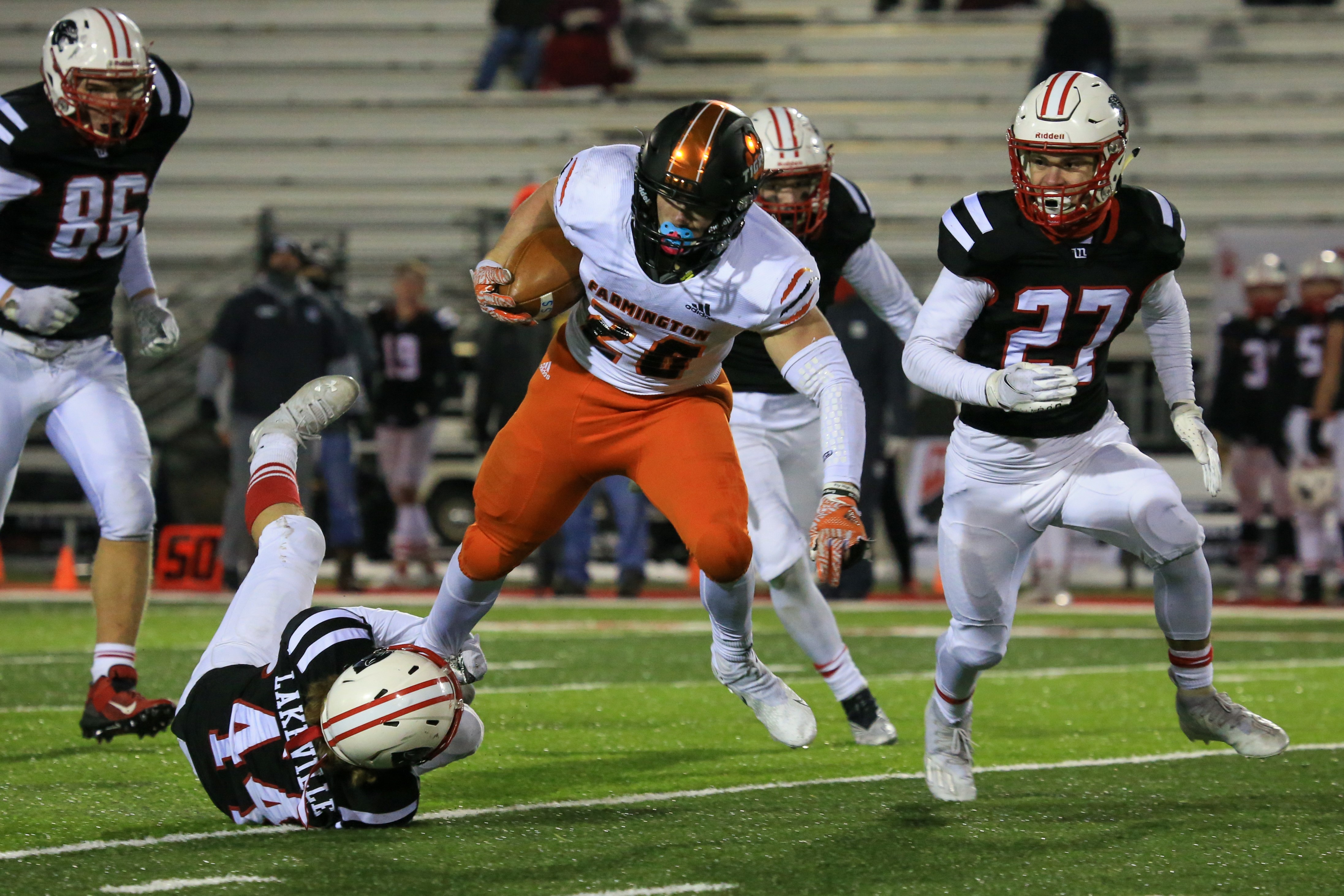 Farmington's Zac Janz (26) breaks out of the grasp of a Lakeville North defender on his way to a fourth-quarter first down. Janz ran for three touchdowns in the Tigers’ 29-7 victory over the Panthers in Lakeville. Photo by Jeff Lawler, SportsEngine

For three quarters Wednesday against Lakeville North, Farmington running back Zac Janz had modest success rushing the ball, amassing 79 yards but not more than 14 on a single carry.

The 5-9, 200-pound senior broke through in the fourth quarter, rushing for over 90 yards and two touchdowns, as the Tigers defeated the Panthers 29-7 at Lakeville North.

Janz, a three-year starter, finished with a season-high 172 yards, including a 33-yard touchdown run midway through the fourth quarter that gave Farmington a 22-7 lead.

He sealed the victory with a two-yard touchdown run with 2:23 to go on the Tigers’ next drive.

“There were a lot of carries where it would be like one yard, negative one yard, three yards,” said Janz, who missed some playing time last month with a hamstring injury. “We just kept pounding it and eventually the big runs came through.”

Farmington (5-1) was dominant on defense against the Panthers (3-3), allowing just five first downs and forcing punts on five of Lakeville North’s eight possessions.
The Tigers held the Panthers to an average of 3.3 yards per rushing attempt and allowed no play longer than 11 yards in the second half.

“Our defense has been underrated all year,” coach Adam Fischer said. “I think they swarm together — all 11 getting to the football — and I just am so proud of that group.”

Fischer said the win was Farmington’s first against Lakeville North. The teams have played annually since 2015, and the Panthers had scored at least 42 points in each game, winning all of them by at least two touchdowns.

“We don’t care if they think of us as a rival. They are our biggest rival,” Janz said. “It’s huge to come into their stadium and beat them. It feels great.”

Quarterback Alex Berreth threw for 114 yards and rushed for a touchdown for the Tigers, who converted five of eight third downs of 10 yards or longer.

The Panthers’ Gunnar Swetala caught a 37-yard touchdown pass from Matt Miller for the team’s only score.

Zac Janz rushed for an unofficial 172 yards and three touchdowns and Farmington's defense forced punts on five of eight Lakeville North possessions as the Tigers defeated the Panthers 29-7.

Janz, a 5-9, 200-pound senior, was especially effective in the fourth quarter, rushing for touchdowns on two of the Tigers' final three possessions. That included a 33-yard score on fourth-and-two with 5:50 left to gave the Tigers a two-touchdown lead. 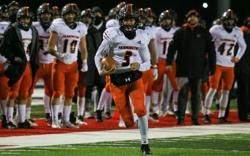 Quarterback Alex Berreth added 114 passing yards and a rushing touchdown for the Tigers (5-1), who had lost to Lakeville North each of the past five years.

The Farmington defense held the host Panthers to 134 yards, including 87 rushing yards on 28 carries, and it allowed just five first downs.

Gunnar Swetala caught a 37-yard touchdown pass from Matt Miller for the Panthers (3-3) in the second quarter. 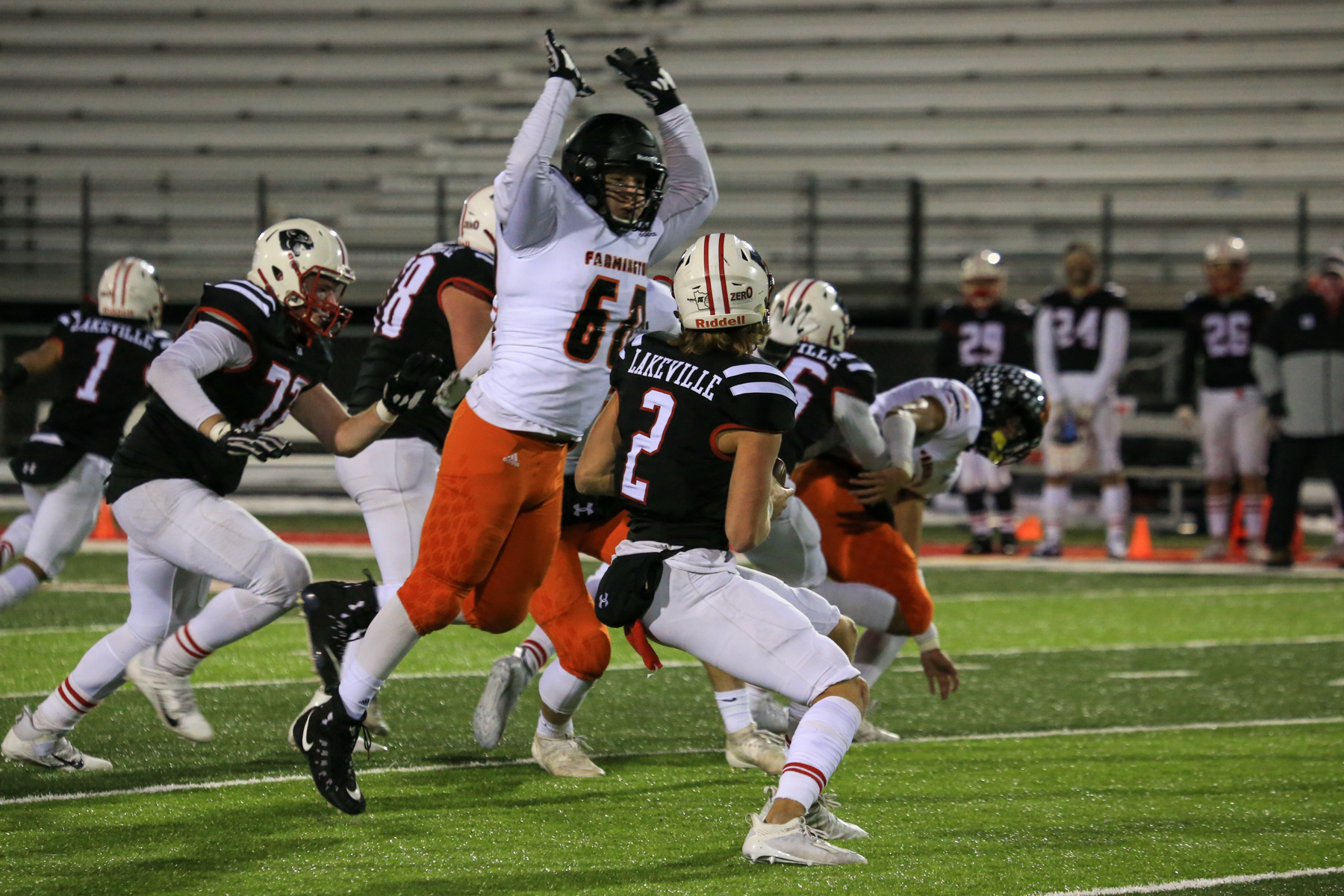