The Pioneers and Rockets combined for eight turnovers in the first half, with the first Pierz giveaway culminating in a Rockford touchdown. 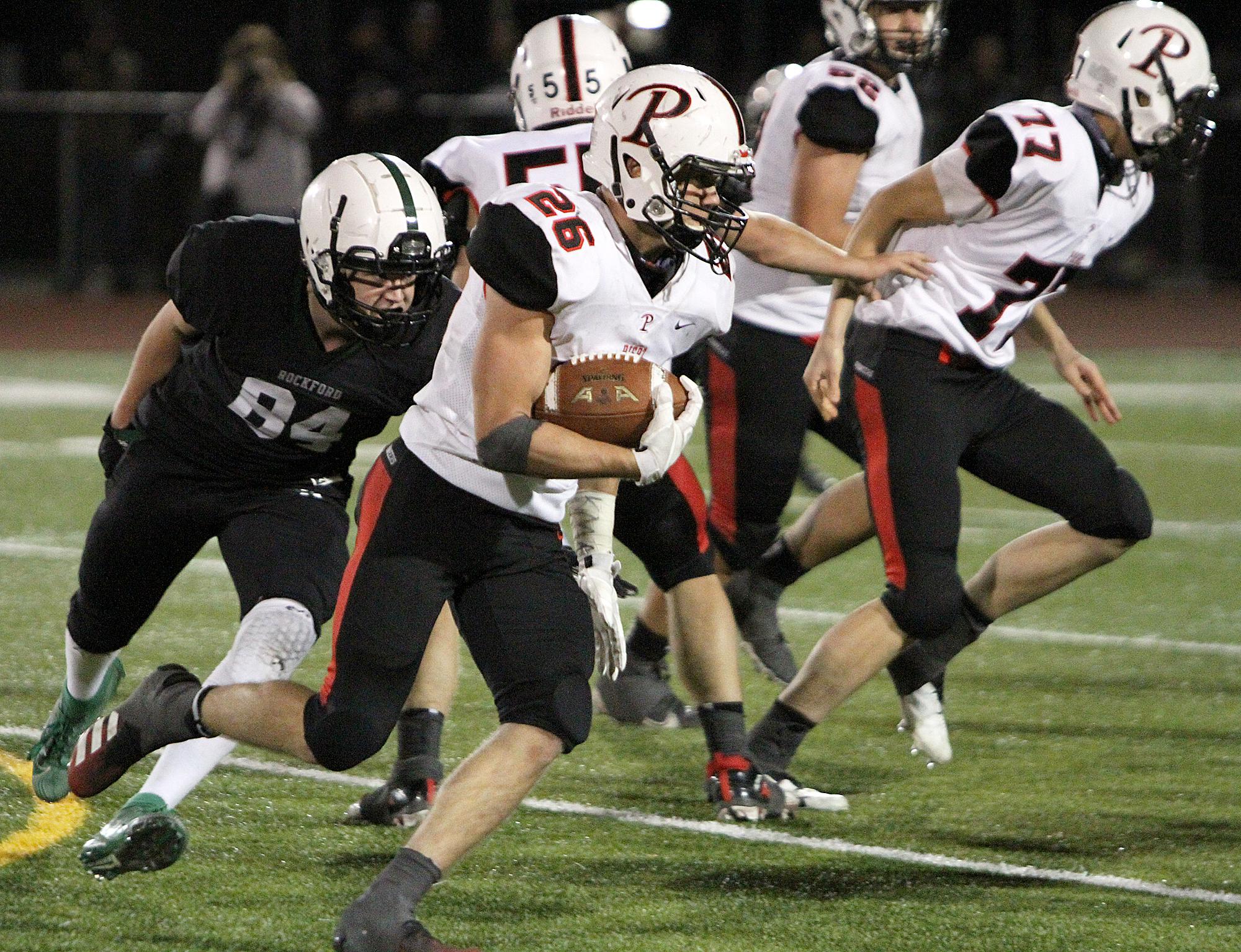 Pierz senior running back Mike Leidenfrost ran for 161 yards and three TDs as Pierz rallied on the road at Rockford for a 32-13 victory Friday night. Pierz, ranked No. 4 in the Class 3A AP statewide poll, improves to 5-0. Photo by Drew Herron, SportsEngin

You don’t often hear coaches talk about how proud they are of their team after a game in which they turned the ball over four times. That’s likely because teams don’t often win by 19 points and force five turnovers themselves when they give it up that much, but that’s exactly what Pierz did in its 32-13 road victory over Rockford on Friday night.

“They’re bigger than us, and they had quite a few athletes all over the field and we’re very proud of our kids’ effort,” Pierz coach Danny Saehr said. “We took advantage of a couple mistakes they made, and give them credit, they took advantage of our mistakes early on, but our kids played extremely hard and that’s the biggest thing we ask as a coaching staff.”

All four of the Pioneers’ (5-0, 2-0) turnovers came in the first half, with two of them coming almost immediately. After their defense forced a three-and-out, Michael Leidenfrost muffed a punt that was converted into seven points for the Rockets (3-2, 2-1). Two plays later, Leidenfrost fumbled the ball back to the Rockets and it looked like an upset was in the works. 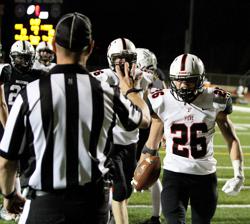 “We had early mistakes. I had two right at the beginning, and when somebody makes a mistake you’ve got to pick them up,” Leidenfrost said.

That’s exactly what happened. Trevor Radunz came up with an interception on the first play after the fumble to get the ball back for the Pioneers, who are ranked No. 4 in the Class 3A Associated Press statewide poll.

“You’ve got to pick each other up and you’ve got to pick yourself up...Trevor Radunz gets a pick, picks me up, gets the whole team going, and from there we were pretty much rolling,” Leidenfrost said.

The pick-me-up moment worked for Leidenfrost, as he finished the game with 161 rushing yards and three touchdowns. His first TD was set up by Radunz’s second interception of the first half. Once the teams got time to make adjustments at halftime, the Pioneers came out in the second half and executed their original game plan to near perfection.

“I feel like in the second half we really came out and did what we wanted to do. We wanted to come down, run the ball hard and really just establish the line,” Leidenfrost said.

The Pioneers ran for 128 yards in the second half and dominated time of possession to kill the game clock.

While Pierz won by three TDs, and was the better team Friday, the No. 7-3A Rockets were competitive and forced an undefeated team into a lot of uncharacteristic mistakes. Rockford had lost the last three meetings against Pierz 160-0. It was clear from the start of this game that a large shutout victory wasn’t in the works for the Pioneers this season.

“They had a bunch of kids coming back, their running back [Connor Schreckenghaust] is a heck of a football player who’s played for three years. They got athletes all over,” Saehr said of the improved Rockford side.

Pierz kept its undefeated season alive on Friday night, as the Pioneers were able to go on the road and come away with a 32-13 victory over Rockford.

The Pioneers (5-0, 2-0) were down early after the Rockets (3-2, 2-1) took advantage of a muffed punt and turned it into a touchdown run by Ryan Storlien midway through the first quarter to go up 7-0 after the extra-point attempt was converted.

That was the first of eight first-half turnovers, with each team committing four of them. This led to short fields and plenty of points for both teams, with the Pioneers, ranked No. 4 in the Class 3A Associated Press statewide poll, taking a 20-13 lead into halftime.

There was no doubt which was the better team once the second half started. The Pioneers asserted their dominance on both sides of the ball for all 24 minutes. They had 152 total yards in the latter half while allowing the No. 7-3A Rockets only 11. Kamden Happke even came up with a game-sealing interception to ensure Pierz won the turnover battle.

Most of those second half yards came on the ground — 128 to be exact — and both of Pierz’s second-half TDs came on runs. Michael Leidenfrost had a 5-yard burst into the end zone, his third TD of the game, and Ross Boser had a 20-yard TD run. They both had a productive ground gamel, as Leidenfrost finished with a game-high 161 rushing yards and Boser added 81. 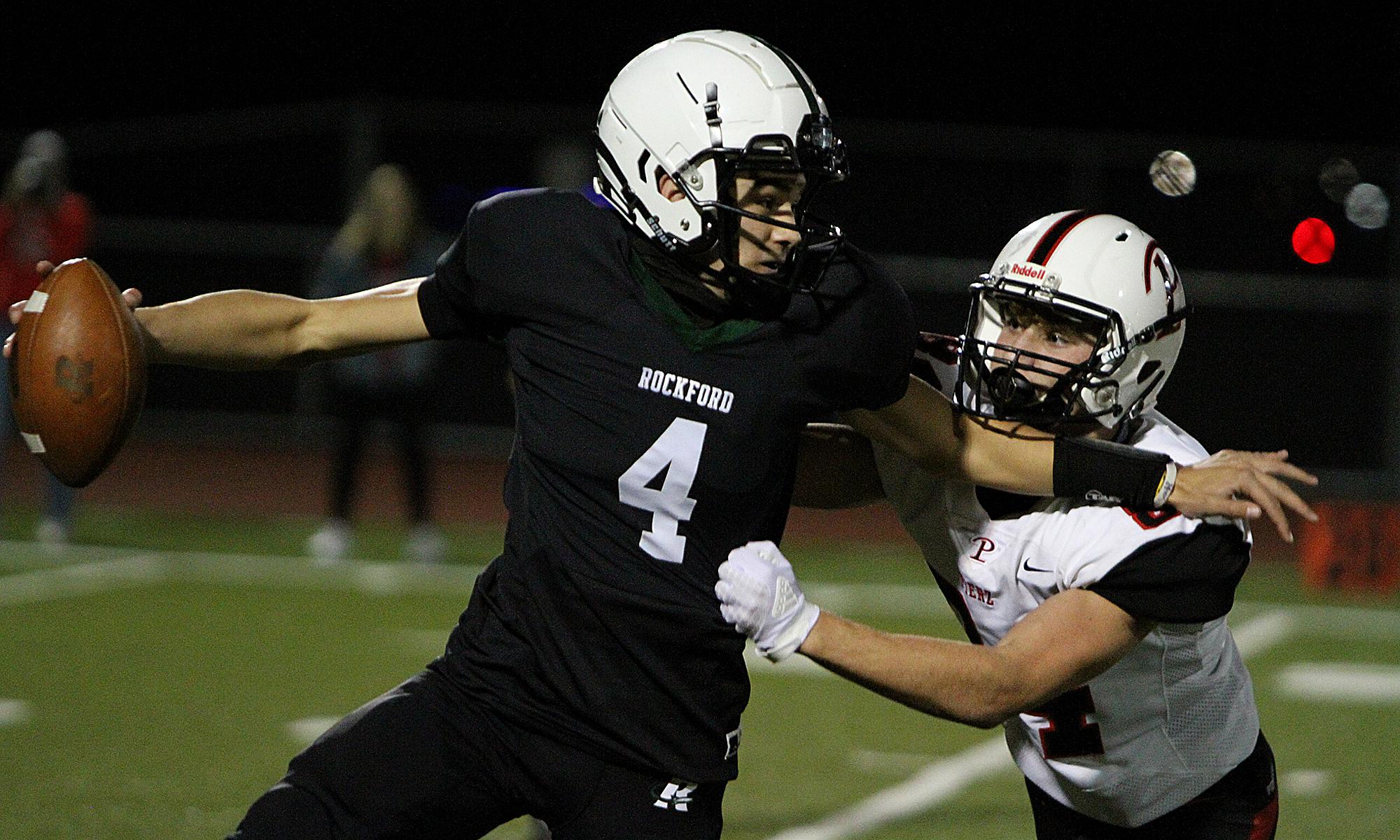 Rockford junior quarterback Sam Zilmer fights off a tackle near the flat in the second half at home on Friday night. Photo by Drew Herron, SportsEngine