When COVID disrupts prep football, you never know who, or if, you’re going to play

Adjusting game plans to a new opponent, often at the last minute, adds stress to an already-difficult season, metro area players said. But they still treasure just being able to play. 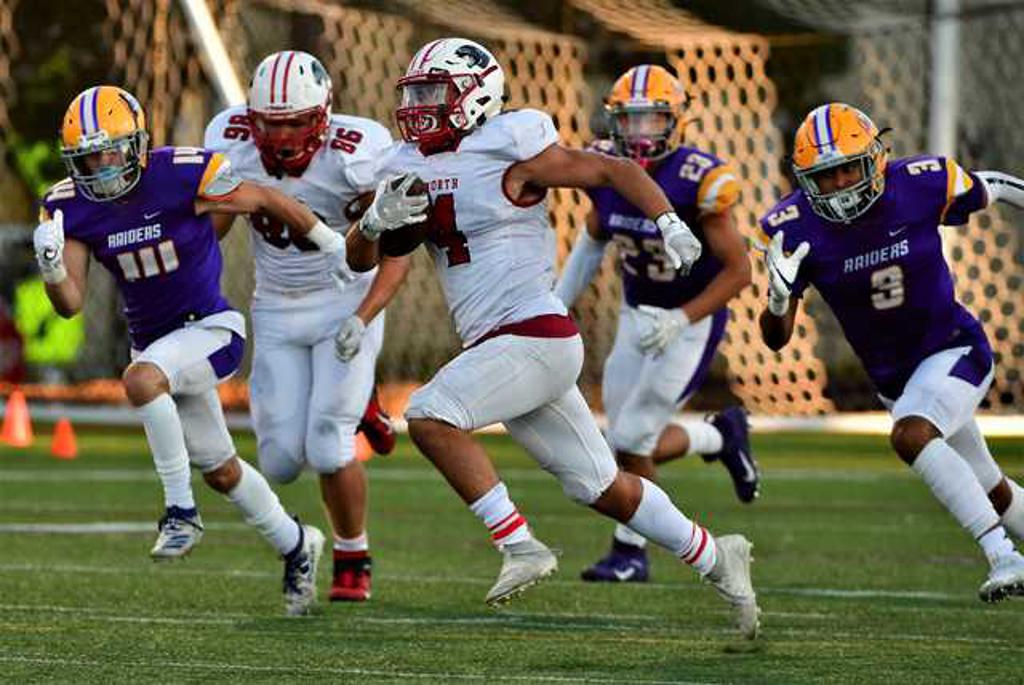 Lakeville North running back Logan Freeburg ran away from defenders in a 55-14 victory over Cretin-Derham Hall on Oct. 10. The game was scheduled after both teams lost their scheduled Friday opponent because of COVID-19 issues. Photo by Brendon Stuckey

Logan Freeburg is a little worn out and it’s not from too much playing time.

Through the first three weeks of the season, Lakeville North did not play the opponent originally on its schedule, the games all canceled or postponed at the last minute. The Panthers found replacements for the first two, but last Friday had an undesired bye when COVID-19 concerns forced Eastview to withdraw.

That game has since been rescheduled for Monday.

For Freeburg, a senior running back, and hundreds of other football players across the metro and the state, the uncertainty of what lies ahead is wearying.

“It’s been really difficult,” Freeburg said. The challenge of preparing for one team, dealing with a gameday cancellation, then finding out a new opponent has been lined up at the last minute adds mental stress in an already difficult season, he said.

“It’s frustrating. You go from working all week on a game plan to playing a different team with just one day to prepare,” he said. “Our mind-set gets totally flipped on its head.”

Pregame preparation — scouting opponents, preparing and installing a game plan, adjusting plays and formations to account for tendencies — has long been a vital component during the week leading up to a game.

Tossing out these preparations at the 11th hour, with little or no time to adjust, can throw even the best teams for a loop.

Last Friday, after preparing all week to play Anoka — a program with just three victories since 2017 — Champlin Park learned that the Tornadoes had pulled out due to pandemic concerns. Their replacement that afternoon? St. Michael-Albertville, a top-five metro team.

“We went to school thinking we were going to play Anoka. By lunch time, we found out we were actually going to play St. Michael,” senior safety DJ Myles said. “We started searching for film on them. We were watching film at lunch, on the bus, trying desperately to pick up little things.”

The Rebels suffered their first loss of the season, 31-13. Myles, however, refused to blame the loss on short notice. “It happened to them, too,” he said. “They didn’t know they were going to play us. It was just another obstacle for us to deal with.”

Nearly 80 teams statewide have had games postponed, canceled or rescheduled this fall, with more expected as COVID cases continue to rise. It’s forced teams to take measures they’d rather not to ensure they can get their games in.

Rosemount had its first two games canceled before finally taking the field Friday against Eagan. It reached out to at least five teams, looking for games to replace those lost when it couldn’t play. Woodbury, which had its Friday game against Cretin-Derham Hall postponed, answered.

The teams met Monday, just three days after Rosemount’s first game of the season. It contributed to a sloppy first half, filled with penalties, turnovers and miscues, and no points. Things settled down in the second half and Rosemount pulled out a 9-7 victory.

After the game Rosemount linebacker Jake Ratzlaff said he could sense it was his second game in four days.

“Yeah, you could feel it a little bit. More a psychological thing than anything,” he said. “Getting your mind right, mostly. Looking at it like it was a Thursday before a Friday night game.”

Woodbury coach Andy Hill said the combination of having kids missing because of COVID and a lack of practice was evident. The Royals had averaged 47 points per game going in but managed just one touchdown in the game.

Hill said the short notice forced Woodbury to recycle the game plan it had devised for Cretin-Derham Hall, its original opponent. “You’re not going to come up with a new game plan,’’ he said. “We were pretty vanilla.”

Even though teams are consistently battling the unknown, for most players, just getting the chance to play trumps all.

Last week players from Andover, Anoka, Blaine, Champlin Park and Coon Rapids spent the weekend believing their seasons were just about over when the Anoka-Hennepin School District announced it was transitioning to solely distance learning and that all school activities were shutting down on Nov. 2.

By Monday, moods turned 180 degrees when the school board voted 5-1 not to shut down the season.

“It was kind of exhausting to go through,” Myles said. “I was thinking [Friday] was going to be my last game and I was going to play like it. But I think this is a blessing rather than a burden. In the future, I’ll look back and say this year was really tough, but, at the end of the day, it’s made us stronger, made us better and helped us grow.”