From cornerback to quarterback at Holy Family 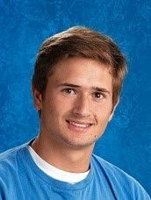 One year ago, Michael Roane was a cornerback for Holy Family, playing a key defensive role for a team that advanced to the Class 3A championship game.

Roane, a 6-2, 195-pound all-around athlete, also found some playing time at guard, a position that carries unique responsibilities in the Fire's offense: occasionally carrying the ball.

But Roane has found his niche this season, taking over at quarterback and putting up impressive statistics running (1,432 yards) and passing (1,164 yards, 13 TDs). He led Holy Family to the Class 3A, Section 2 championship with a victory over Minneapolis Washburn on Friday, sending the Fire to the state tournament for the third consecutive season.

Staff writer Jim Paulsen talked with Roane about his adjustment to quarterback this season.

Q How has the transition to quarterback gone for you?

A I played quarterback in my freshman year and a little bit in my sophomore year. And last year I played a little when Jeff [Soule] was hurt. It's kind of taken me by surprise how well things have gone. I have to give most of the credit to other players on the team, like the offensive line that has given me a lot of huge holes to run through.

Q What has been the biggest adjustment?

A Just getting all of the footwork down. It comes down to centimeters. For example, I need to get to a certain depth on some passing plays. I can't just drop back and throw it. I have to be in the exact right spot.

Q Last year, the team advanced to the Class 3A championship game. How has that carried over to this season?

A Most people thought last year was our school's big chance. We had like 18 or 19 seniors on the team. When it ended, the seniors this year started thinking, "This can't be the last trip to state. If they can do it, why can't we?"

Q What has been special about this team?

A We've all just worked so hard to get where we are. We knew we couldn't replace some of the guys we lost last year, but we have had a lot of good people come up and pull their weight.

Q Pretty fulfilling to get this far?

A Oh yeah. I couldn't ask for a better group of guys to play with. At some schools, players might not like going to practice, but here, we all look forward to practice. It's just one big group of friends. We're like a big family that hangs out together all the time, after practice and on weekends and before games.

Q How big a deal is it for the school to have the team go to another state tournament?

A I think it's a huge thing for the school. There are a bunch of great sports teams at Holy Family but I think football is one of the greatest successes. We've won 27 straight games at home. People love to come out to the games. Making it this far makes it fun for everyone.

Q The season goes by pretty fast, doesn't it?

A It's crazy how fast it goes by. Like just in the blink of an eye, it's over. That's why, for the rest of the season, I'm going to make the best of everything I do because you never know when it will be your last play.

Q Have you thought about next year?

A Yeah. I've heard from some Division I schools and some Division II and III schools. I haven't decided where I'm going yet. It will be somewhere where I can play football. That's always been a dream of mine. I'm still trying to find that perfect match for me.