Prior Lake’s backfield stable gallops over Edina in blowout victory

The Lakers’ backfield committee combined for 403 yards, spearheaded by Tyler Shaver who ran for 163 yards and scored a TD. 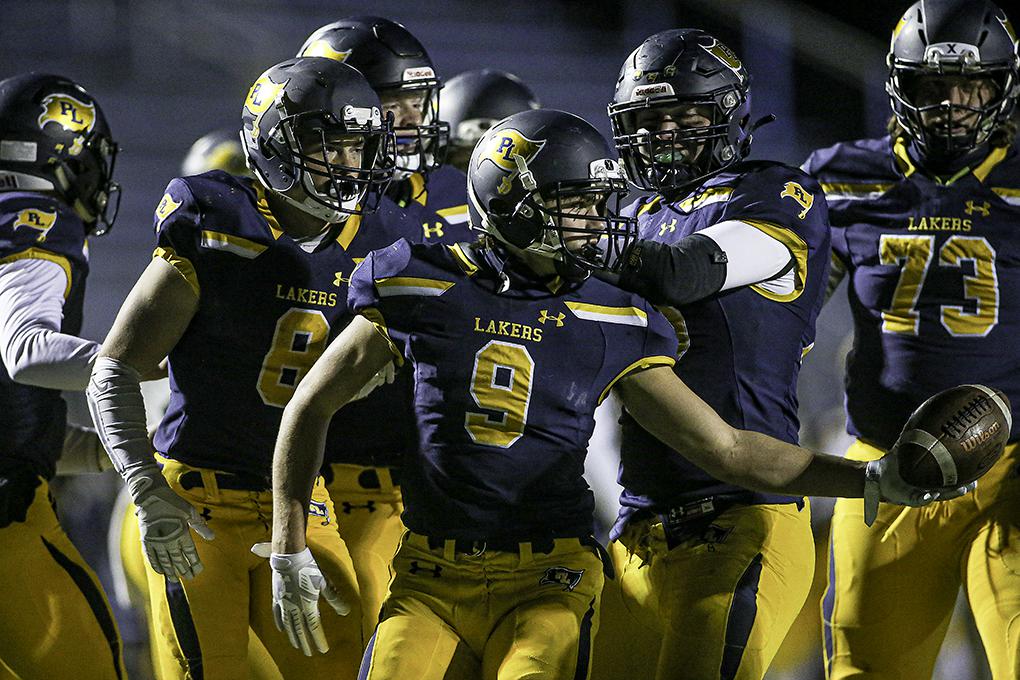 Prior Lake running back Tanner Newlin (9) handed the ball to an official as his teammates celebrated his first-half touchdown run. Photo by Mark Hvidsten, SportsEngine 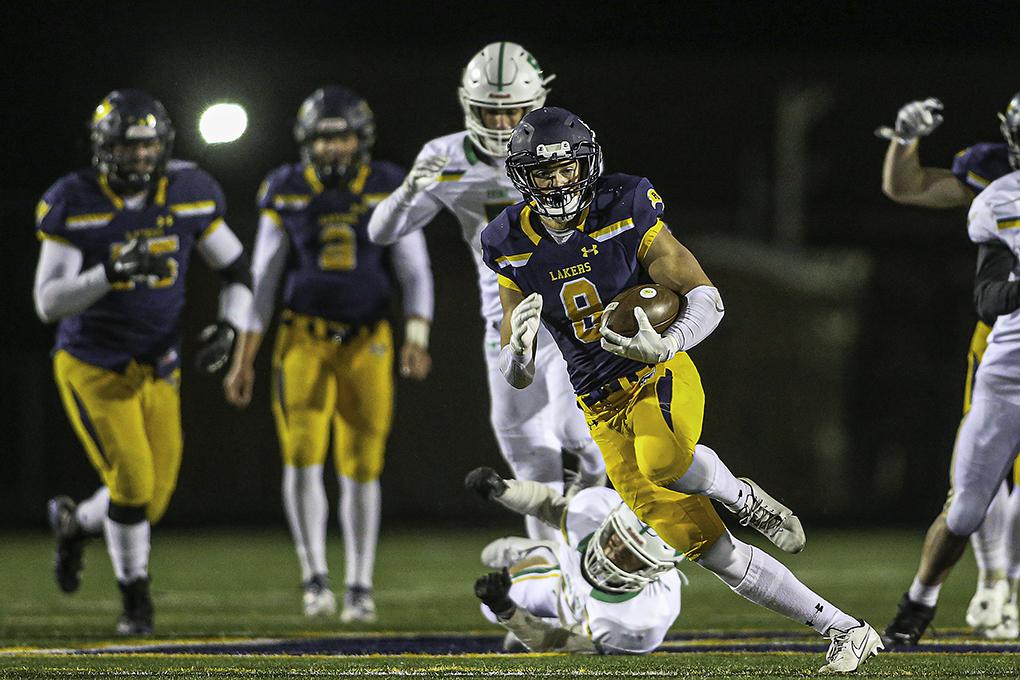 Prior Lake running back Tyler Shaver (8) broke free for a long run in the second quarter of the Lakers' 42-0 victory over Edina at Prior Lake High School on Thursday. Photo by Mark Hvidsten, SportsEngine

Prior Lake coach Matt Gegenheimer said after the Lakers' triumph over Edina that most of the teams in Minnesota that win in the postseason can run the football well.

Through two games this season, Gegenheimer appears to have a team that’s more than capable of running the football. The Lakers’ backfield shined on Thursday, combining for more than 400 yards of offense in Prior Lake’s 42-0 victory over Edina at Dan Patch Stadium.

For Prior Lake, it all starts with senior running back Tyler Shaver. He caught some attention in Week 1 after running for 169 yards and two touchdowns in the Lakers’ 29-28 win over defending Class 6A state champion Wayzata on Oct. 9.

Shaver had a similarly strong performance this week, rushing for 163 yards and a TD. He now has 332 yards on the ground in just two games played.

“I really like the way our offensive line has been shaping up,” Gegenheimer said. “Shaver has been outstanding back there for us.” 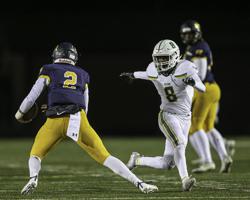 Photo Gallery: Edina vs. Prior Lake

But it’s not just Shaver getting things done for Prior Lake, which is ranked No. 3 in the Class 6A Associated Press statewide poll.

Senior running back Cameron Miller scored his third TD of the season in a 21-point first half for the Lakers (2-0, 2-0), while finishing with 66 yards.

“We got guys that can carry the ball in all sorts of ways,” Shaver said. “I think [Miller] and I make a good combination. It’s working really well.”

Another key to Prior Lake’s run game is sophomore Joseph Krouse. He played a pivotal role as a wingback, recording 87 yards on just five carries.

“We knew we had a good one in Shaver,” Gegenheimer said. “I’m really pleased with [Miller] and the other guys coming around now. Our o-line is doing a tremendous job. They’re winning the trenches for us and opening things up.”

Lakers junior quarterback Kyle Haas is also a threat to run with the ball. He picked up two touchdowns against Edina.

With a running game that bludgeons and wears down opponents, Haas, who completed six passes for 106 yards Thursday, has gotten some chances to show off his arm and work on developing Prior Lake’s passing attack.

“Our play-action has been good for us,” Gegenheimer said. “I think as the season goes on, we’ll continue to get better at that. Haas is a good one, and we’ll be able to use him a lot.”

With new coach Jason Potts taking over the reigns at Edina (0-2, 0-1), it’s been a slow start for the Hornets who have tallied just three points this season. Edina didn’t just struggle to keep up with the Lakers’ attack, the Hornets also turned the ball over four times.

Though the season remains young it appears Prior Lake’s offense is a force to be reckoned with. The team will put its unblemished record to the test next week in a matchup with No. 1-6A Lakeville South.

“Every single week in 6A football is a complete battle,” Gegenheimer said. “We have a lot of battles ahead of us.”

After senior running back Tyler Shaver’s 169 rushing yard performance in Week 1, Shaver and his backfield mates for Prior Lake stole the show once again, combining for 403 yards in the Lakers’ 42-0 defeat of Edina on Thursday at Dan Patch Stadium.

Shaver was the ringleader for the Lakers, ranked No. 3 in the Class 6A Associated Press statewide poll, rushing for 163 of those yards. He also picked up a touchdown, which came on a 48-yard scamper.

Aside from Shaver, Prior Lake (2-0, 2-0) got significant contributions from senior Cameron Miller and sophomore Joseph Krouse. Miller scored a TD and rushed for 66 yards, while Krouse finished with 87 yards on five carries.

Lakers junior quarterback Kyle Haas also stepped into the running game with 41 yards and two touchdowns. He also threw for 106 yards and a TD pass to senior Tanner Newlin, who also had an interception in the win.

Senior Sawyer Anderson, Berghult and junior running back Evan Deutsch each ran for 36 yards in the loss. 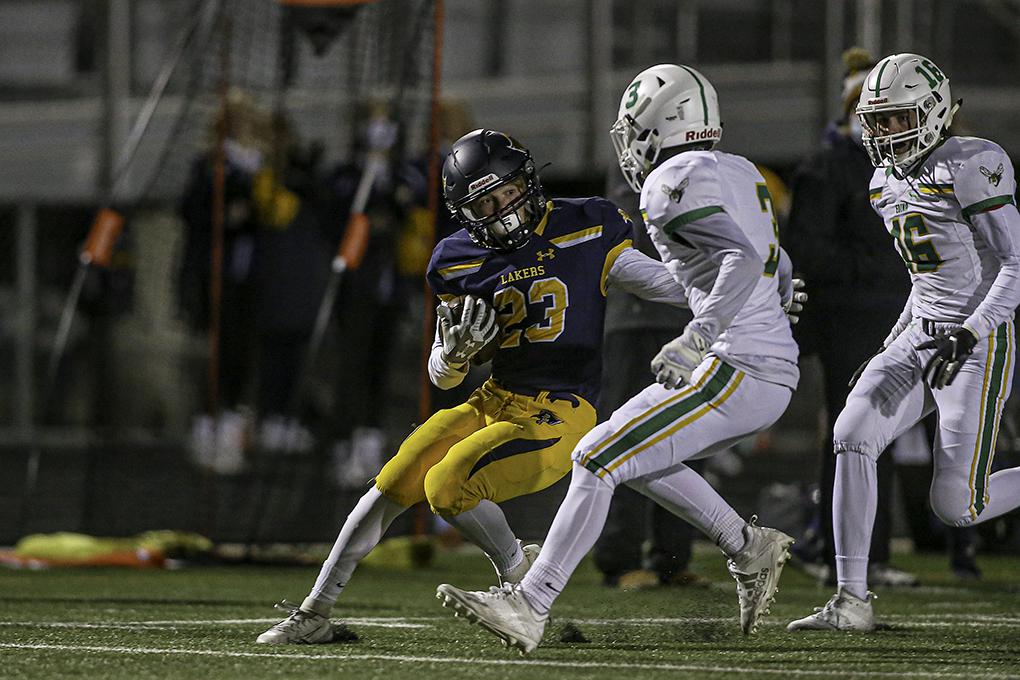 Prior Lake sophomore Joseph Krouse was slowed and tackled by Edina's Anthony Doll. The run set up a Lakers touchdown in the first half. Photo by Mark Hvidsten, SportsEngine