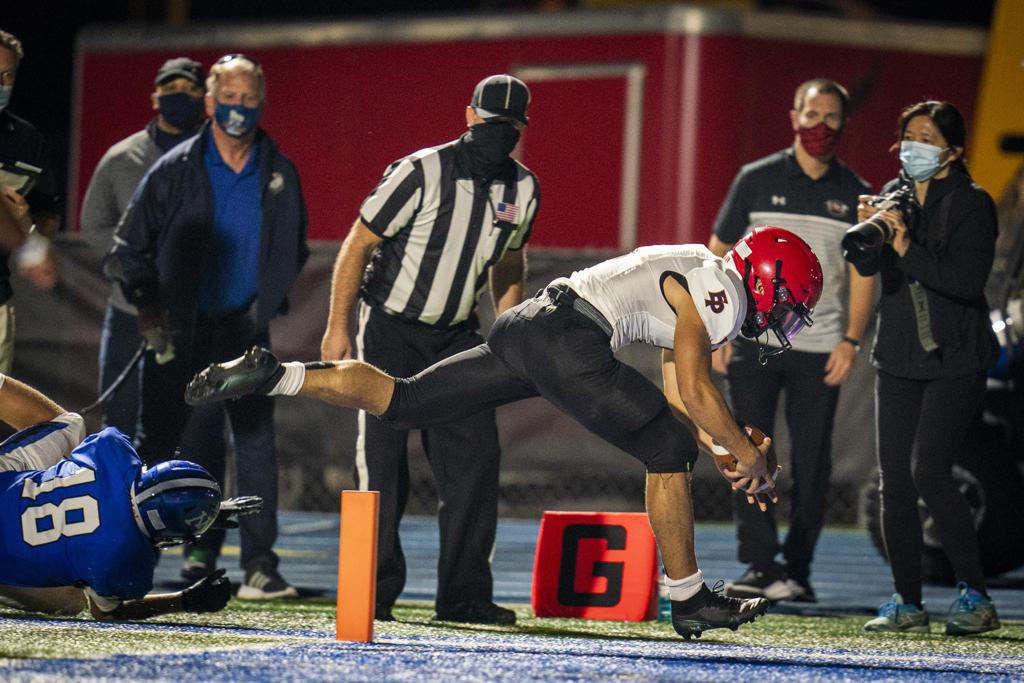 Eden Prairie quarterback David Warren-Mitchell ran for a touchdown in the first half against Minnetonka. Photo: LEILA NAVIDI • leila.navidi@startribune.com

Between the white lines, it was no different from many other fall Fridays. Football, 11-on-11, running and hitting and tackling, and an excess of emotion.

Eden Prairie, coming off a subpar 7-3 season in 2019, built a two-touchdown lead in the first quarter lead and cruised to a 34-7 victory at Minnetonka. It was the 11th consecutive loss for the Skippers, coming off an 0-9 season even more forgettable than the Eagles’ year.
But the first game for either team under the shadow of COVID-19 differed just about every other way.

In Minnetonka’s Einar Anderson Stadium, the allotted 250 fans easily got swallowed up in the surrounding emptiness. The once-raucous student section, where bench seats had been removed because no one sits anyway, was eerily devoid of life.

There were cheerleaders but no band. The stadium’s PA announcer and music coordinator tried to drum up spirit, but with fans split almost equally between teams, it seemed optimistic at best. Coaches could be heard clearly shouting instructions and players responded with endless exhortations of “let’s go.” On the sidelines, offensive linemen — normally bunched together on a bench taking a breather between shifts — were spaced 6 feet apart in separate chairs, like children being isolated to behave.

“It was surreal,” said Mark Esch, Minnetonka’s first-year head coach. “But then again, it was football.”

On the field it felt much more normal.

Eden Prairie wasted no time asserting itself. The Eagles drove 54 yards in seven plays on their first possession, scoring when second-year quarterback David Warren-Mitchell outraced the defense around left end for a 2-yard touchdown.

After shutting down Minnetonka on its next possession, Eden Prairie bumped its advantage to two scores when Warren-Mitchell hit his stellar wide receiver, Cade Kramer, with a brilliantly placed 19-yard fade pass.

The early lead pleased Eden Prairie coach Mike Grant.
“I thought we executed well tonight,” he said. “No scrimmages, first game. But we have 15 guys back, so we should.”

Grant’s shrewd football intellect helped Eden Prairie increase its lead early in the third quarter. Facing fourth-and-2 at the Minnetonka 47, he offered up a play he’d just drawn up at halftime.

It called for running back Johnny Hartle to drift out of the backfield and take a short dump-off pass from Warren-Mitchell. Hartle caught it and raced untouched diagonally across the field for a 27-0 lead.

“We’ve never run that play in our lives,” Hartle said. “But right when he called it, I said ‘That’s a genius play. It’s open season.’ ”

A 79-yard scoring pass to Kramer gave Eden Prairie a 34-0 lead and Warren-Mitchell the first three-touchdown game of his career.

Despite the big deficit, Minnetonka actually played Eden Prairie nearly straight up after halftime. Only an interception deep in Eden Prairie territory kept the Skippers from a third-quarter touchdown. They finally broke through after an 80-yard drive that ended on William Richman’s 7-yard scoring run.

Esch said he knew playing the Eagles was a difficult way to start, but he was happy with his team’s effort.

“Our kids didn’t quit,” he said. “Probably not the best draw for the first game, but the nice thing about playing a really good team is that we find out our strengths and weaknesses.

“We’ll get there. I have confidence in our kids.”

The Eagles, coming off a rare three-loss season in 2019, led 14-0 after one quarter, with Warren-Mitchell rushing for the first score. He threw a 19-yard scoring pass to Cade Kramer for the other.

Kramer scored his second touchdown of the game on a 79-yard passing play in the third quarter. Earlier in the quarter Warren-Mitchell connected with Johnny Hartle on a 44-yard touchdown.

The Skippers, playing at home in coach Mark Esch’s debut, broke through in the fourth quarter when William Richman ended an 80-yard drive with a 7-yard touchdown run.