As season finally starts, St. Paul Humboldt shows there's a lot of work to be done

Only 11 players showed up for the first practice. And with the district in distance learning because of COVID-19, team information isn't as easily shared and transportation isn't readily available. 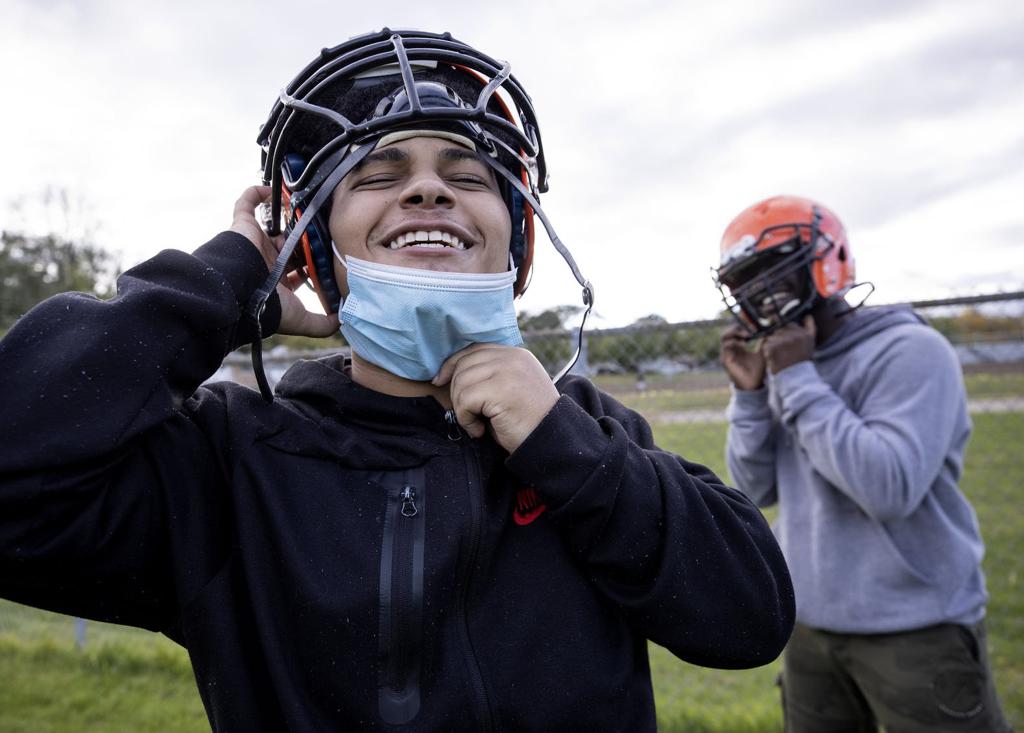 Shawn Jones, 15, was one of 11 players who showed up for the first football practice of the year at St. Paul Humboldt High School. Photo: Carlos Gonzalez * carlos.gonzalez@startribune.com

The first day of football practice at St. Paul Humboldt brought back the excitement for junior Michael Casarez-McCampbell. Arriving at the field to find just 10 other players brought him back to reality.

The small public school on the city’s west side lost 18 seniors from last season’s team. And with the district in distance learning because of COVID-19, information isn’t as easily shared and transportation isn’t readily available.

Players and coaches did the best they could to spread the word the past week that football is back. But not all prospective players were receptive.

“A lot of times it was, ‘I’ll hit you back,’ and then they never texted back,” Casarez-McCampbell said. “We’ve got to make guys want to play, to like to play. But if they don’t want to, there’s nothing else you can do.”

On Monday, the 11 players gathered around coach Arnulfo Flores and he immediately put them into a pursuit drill.

“You’ve got to go home tonight and get a hold of guys,” said Flores, donning a black face covering with the West Side Boosters logo. “Not tomorrow. Tonight. I’m going to try and work my magic, but we need your help.”

Until the Sept. 21 reversal by the Minnesota State High School League, football wasn’t going to be played anywhere this fall. Flores understands the void better than most coaches.

In 2016, Flores’ first season as head coach of his alma mater, he dropped his team from the varsity ranks because of low participation numbers. The Hawks did end up playing one varsity game that season, traveling to Waterville-Elysian-Morristown. They filled in for a previously scheduled opponent that forfeited after a school investigation of a hazing incident.

Humboldt returned to full-time varsity play the next season. And while a few more victories and players have come around, neither have come in huge numbers. Still, dedicated players such as Casarez-McCampbell are excited to have football this fall and can’t fathom losing it again due to low participation numbers.

“Football is like another home you can go to,” he said. “Because without football, a lot of guys really aren’t doing anything. They’re just home or out in the streets. But when you gather everybody, it’s like one big family. That’s why I love football.”

Casarez-McCampbell, a playmaking wide receiver, caught a few passes from sophomore quarterback Jorge Irizarry, a taste of what the duo could be this fall.

An assistant coach praised Casarez-McCampbell for “setting a tone” by hustling through conditioning drills. Casarez-McCampbell paid it forward, tapping the shoulder of a struggling teammate for encouragement. Only eight of the players at practice were eligible to participate. The other three need to take a required physical.

Flores told the few and the proud, “We’ve got 11 so we can go out and play right now if we had to.” But he knows better.

“It’s great to have them out here,” Flores said. “But right now, I feel like we’re back in the same boat as five years ago. I’ve got no seniors. Hopefully throughout the week we’ll get more guys out here.”