The MSHSL vote Monday to triggered excitement and relief, especially for senior athletes who were put on the sidelines. 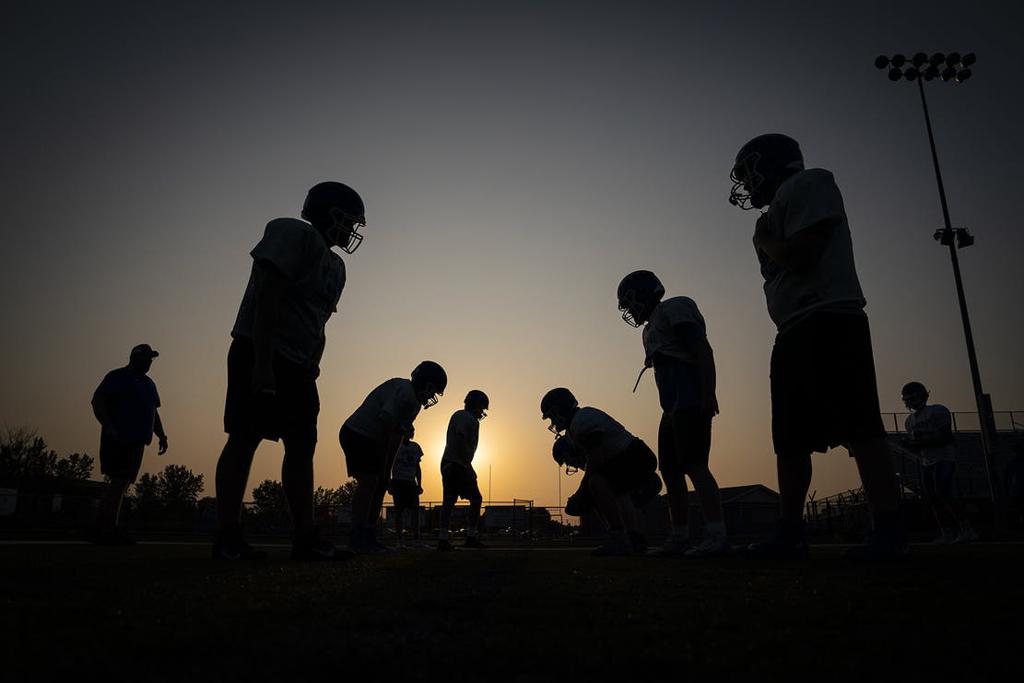 The Woodbury offensive linemen during part in an optional practice Monday evening at their school. Photo: Leila Navidi, Star Tribune

It was decision day, when they would find out whether the Minnesota State High School League’s board of directors would approve resuming football and volleyball. They could hardly wait.

“I woke up today before my alarm went off, I was so excited,” said Yeager, a senior quarterback. “I was pretty much like the rest of the football players in Minnesota. I was on my phone constantly, updating, updating, refreshing my Twitter feed.”

Kamara, an elusive senior halfback, lives with Yeager. He was upstairs, Yeager downstairs, both glued to social media.

“Every time there was a new Twitter post, we would yell, ‘Did you see that?’ ” Kamara said.

The league’s votes to resume football and volleyball this fall, albeit with shortened seasons and most likely without state tournaments, generated plenty of excitement across the state and metro area among players and coaches alike.

“When we finally saw that we got to have a season, I ran around the room, screaming at the top of my lungs,” Kamara said.

“He must have seen it first,” Yeager recalled. “I heard this yell from upstairs, then we were both pretty loud for about five minutes.”

Rocori coach James Herberg, who coached his team to a stunning overtime upset victory over the SMB Wolfpack in the 2019 Class 4A championship game, was thrilled. And more than a little relieved.

“I’m extremely excited. And at the same time, exceptionally drained,” Herberg said. “A lot of people put in a lot of work and energy trying to get this. For the many stakeholders, it’s an absolute joy, but it also took a toll.”

Before Monday, many high school seniors had begun to wonder if they had played their final high school contest. The COVID virus, which prompted the high school league in August to postpone football and volleyball seasons, was lingering. There were no guarantees that the league’s plan to hold a spring season would happen.

“I honestly started thinking that I was going to graduate and go off to college without playing my senior year,” Kamara said.

Football practices begin Monday, with a six-game regular season starting the week of Oct. 5. A two-week football postseason will start the week of Nov. 16 in a format yet to be determined.

It’s not the extensive playoff system many coaches were hoping for, but Elk River coach Steve Hamilton said he thinks getting their season back makes the limited postseason easier to swallow.

“This is obviously an extraordinary year,” Hamilton said. “Getting just five or six games wasn’t a concern for me. It’s about getting kids games. If we get any [playoff], it’s cool with us.”

Eagan senior Kennedi Orr, the most highly touted volleyball player in the state, had long planned to finish her senior season, graduate early and head off to the University of Nebraska in January to get a jump on her college career. She had already resigned herself to the disappointment of never wearing an Eagan uniform again.

“I was lying in bed when I saw the news,’’ she said, adding that she thought, “ ‘This is actually happening.’ It was on everyone’s [Snapchat] stories. Everyone on my team was so excited. I thought, ‘I get one more chance to play.’ ”

While the players focus on getting back on the court, many coaches see the questions the return brings, Champlin Park volleyball coach John Yunker said. Volleyball also begins practice on Monday, with the first matches beginning on Oct. 8 and concluding with two weeks of postseason play beginning on Nov. 30. That schedule conflicts with the fall leagues that were set up by volleyball clubs in response to the league’s August decision to move the season to spring.

“We’re excited to be coming back, but there’s a little frustration,” he said. “One answer creates more questions and things that need to be hashed out.”

What will become of the fall leagues to which players have made a time and financial commitment? What about fall tryouts for club teams, which are traditionally held after the conclusion of the high school season? Will players get a waiver to do both?

The league tabled such questions until its scheduled Oct. 1 board of directors meeting.

“There’s a lot of questions that we don’t have answers for,” Yunker said. “But we have a fall season. That’s a lot less headache and a lot less frustrating than if the season were pushed to the spring.”