The Trojans scored 30 unanswered points after the Orioles took a 7-0 lead.

Wayzata’s grasp on Class 5A, Section 5 football is as tight as ever.

The defending big school state champion Trojans made it a perfect 5-for-5 since moving to that section in 2007, defeating Osseo 30-7 on Friday night in the title game.

“Anything can happen once, but to do something like this says a lot about the quality of the coaches and players,” Wayzata coach Brad Anderson said. “That’s really important.”

It’s the third consecutive season the Trojans have knocked the Orioles out of the playoffs. The combined score is 105-14.

Friday’s game was far from perfect — Osseo’s Bridgeport Tusler returned a punt 80 yards for an early 7-0 lead — but the Trojans rolled to their 11th state tournament appearance even though they faced a boatload of adversity before a snap was ever taken.

Down to one healthy regular running back after Erik Roti was held out because of an undisclosed injury, Antonio Ford showed up for the challenge. The 5-9, 200-pound wrecking ball rushed 18 times for 113 yards in the first half alone en route to a 31-carry night — eight more than his previous season high — good for 195 yards.

His evening was highlighted by an 11-yard touchdown run with 9:20 to play that capped the scoring and his workload.
“He did OK,” Anderson said, grinning.

In the absence of a thunder-and-lightning offensive presence with the speedy Roti out, quarterback Nick Martin took center stage with what Anderson called a “whale of a game.”

The senior captain threw for three touchdown passes in the first half from 52, 37 and 26 yards and missed on another long bomb by about 6 inches.

He also twice pinned Osseo inside its 10-yard line with punts.

“Our receivers got open when they needed to,” Martin said.
“I was really excited for this game; I think we all were. We’re happy to be moving on.”

Despite leading tackler Ryan Poppitz being on crutches, the Wayzata defense kept Osseo’s offense out of the end zone and held talented quarterback D.J. Hebert without a completion.

“To lose a guy like we did and come back to shut out a team with that kind of offensive weapons they have — it can’t get any better,” Anderson said. 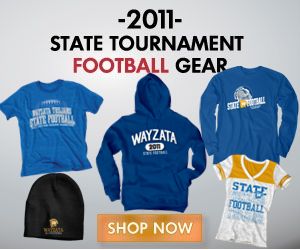