Defensive battle goes down to the wire with one big Warroad play being the difference. 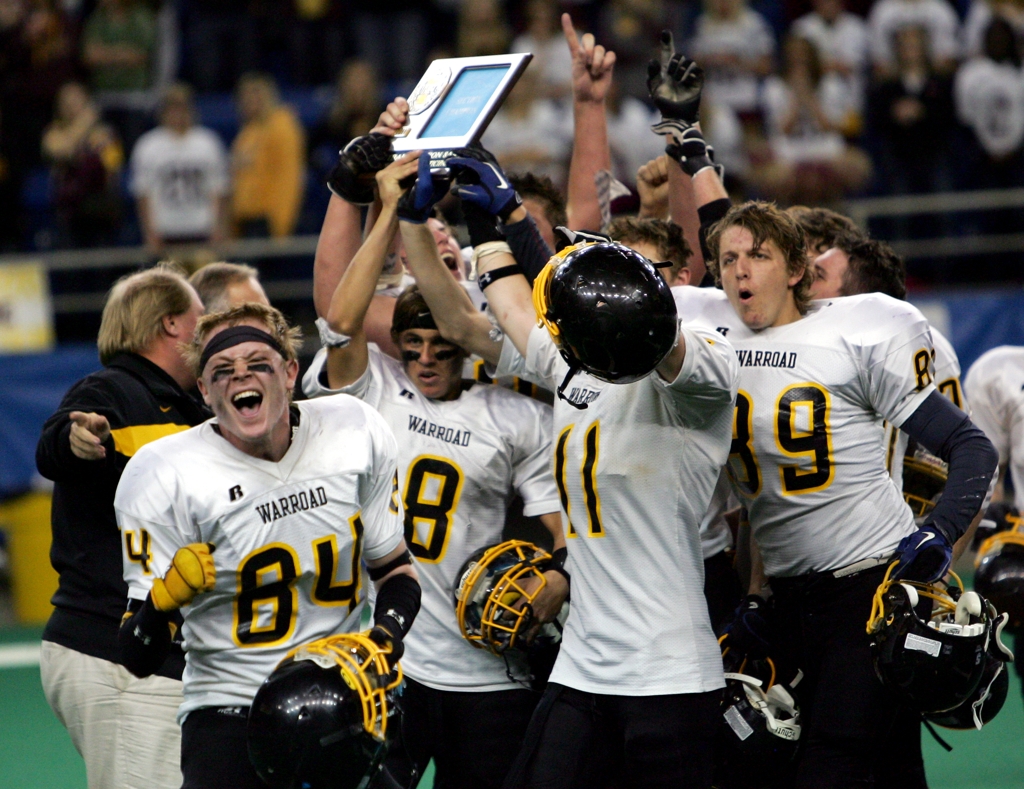 When these two teams squared off less than a month ago, defense was not part of the conversation as Hawley squeaked by 55-48. It was very different in the Section 8AA championship, as Warroad would win this revenge match by a score of 14-7.

“Hawley's a heck of a team, it was a great game, much different than our first matchup.” Said Warroad Head Coach Gabe Richards.

With a one touchdown lead for the entire fourth quarter, Warroad was unable burn any large amount of clock as the Hawley defense stood strong for several three-and-out series for the Warriors.

It was only fitting that the game be put on ice by a defensive play. Warroad’s Alan Peterson came up with an interception on a long pass play down the middle of the field with less than 30 seconds remaining. One kneel down later and Warroad would be headed to the state tournament.

Coach Richards put the end of the game emotion best. “Hey we're still playing football. We're going to enjoy and have another good week of football, good week of practice; (and) we'll see what Paynesville's got.” 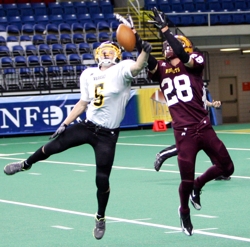 Aaron Haataja (No. 5) deflects a ball away from Josh Johnson (No. 28). Warroad held Hawley to just seven points after surrending 55 to them in the regular season. Photo by Taylor Lunemann

A hard fought battle from start to finish, Warroad came up with the big plays when it counted most and finished off Hawley by a score of 14-7.

Both teams relied heavily on their defense as both team’s punters were busy all day long. Penalties also factored in heavily in the first half as both squads had plenty of false starts and encroachment penalties.

One point is all the separated these teams for much of the game until the third quarter when Alex Sandahl came up with a short reception that turned into a 65 yard gain after breaking a few tackles. One play later Ross Merriman would put Warroad in front for good with a 19 yard scamper into the end zone.

Hawley finishes their season with only a single loss to go along with ten wins. Warroad pulls off their second consecutive upset to gain a state tournament trip. The will travel to The University of Minnesota-Morris’ Big Cat Stadium on Friday to take on Paynesville.

1. Ross Merriman, Warroad
Merriman led the offense not only with his arm but also with his legs. He provided a much needed passing game when the run wasn't working as well. In the third quarter, he connected with Alex Sandahl for a 65 yard catch and run that set himself up for an eight yard touchdown run.

2. Alex Sandahl, Warroad
Warroad's top receiver had a phenomenal game. He was involved in both of the top plays of the game. In the second quarter, he made a leaping grab over a defender in the back of the end zone. He was able to hang on and get his feet inbounds for Warroad's first score. Then, in the third, he picked up a nice block from a teammate and broke free for a 65 yard catch that set up the go ahead touchdown.

3. Brady Pekas, Hawley
Hawley's running back had a solid game running the ball. He scored the lone touchdown for Hawley in the first quarter.