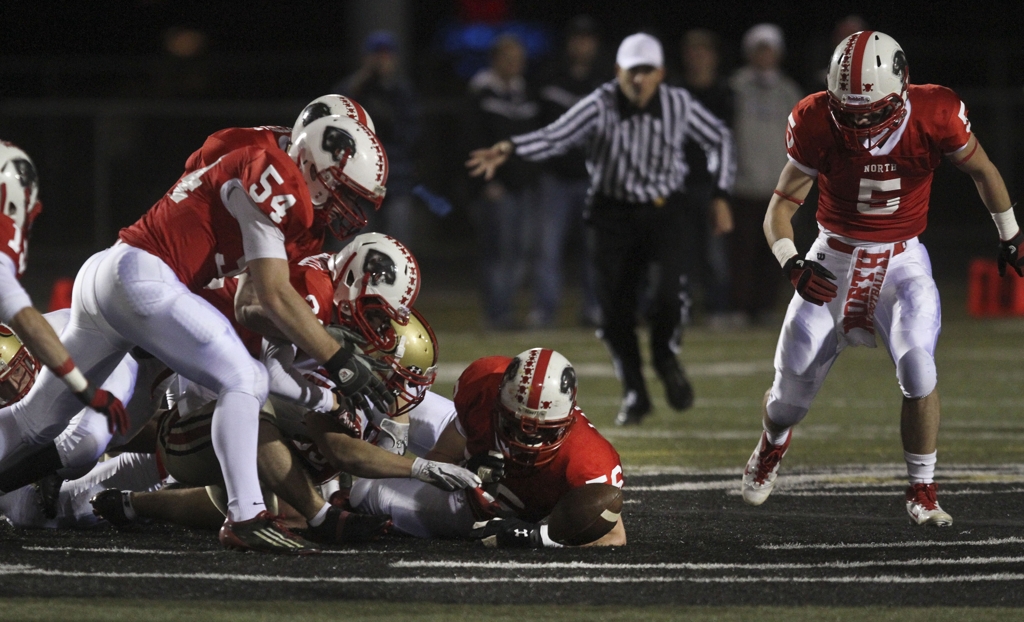 A swarm of Lakeville North defenders pursued a fumble as Lakeville South's Braden Kaufenberg tried to get it back in the first half of Saturday's playoff game.

Lakeville North football coach Brian Vossen was raving about his defense after the Panthers pitched a shutout in the second half en route to a 24-14 section semifinal victory over Lakeville South last Saturday when a reporter inquired whether sophomore Greg Menard was an outside linebacker or a defensive end.

Menard picked up a sack on third-and-7 from the 33 midway through the third quarter that thwarted a South drive and was one of many defensive highlights of the evening.

Vossen confirmed Menard was in at defensive end.

"But I'm glad you asked," Vossen said. "It's kind of fun when the D-ends and linebackers get confused. That's our goal with our blitz packages to make them keep guessing on who is coming and who isn't."

North, which plays host to Owatonna in the Class 5A, Section 1 championship game Friday, switched to a 4-3 defense and registered three second-half sacks against a determined Cougars team that seemingly lost a little more air out of its balloon with each one.

The sacks came after South had built a 14-6 lead only weeks after getting dismantled 30-6 by the Panthers.

Even though North trailed this time, the team never lost hope.

"We'd been down before, but never to a team like [South] with all of this pressure," Vossen said. "It's tough on the kids; nobody wants to lose to his cross-town rival. We just kept telling them that if we could come back and tie it, we'd steal all the momentum.

"We could sense their frustration. Football is an emotional game. You ride the highs and you have to try and fight through the lows."

Though New Prague lost its opening-round volleyball match in the section tournament to Buffalo in a five-game thriller, there were some positives to be had.

Sophomore Emma Hughes broke a Trojans school record with 53 assists. She also was a perfect 13-for-13 from the serve line.