A season of remembrance 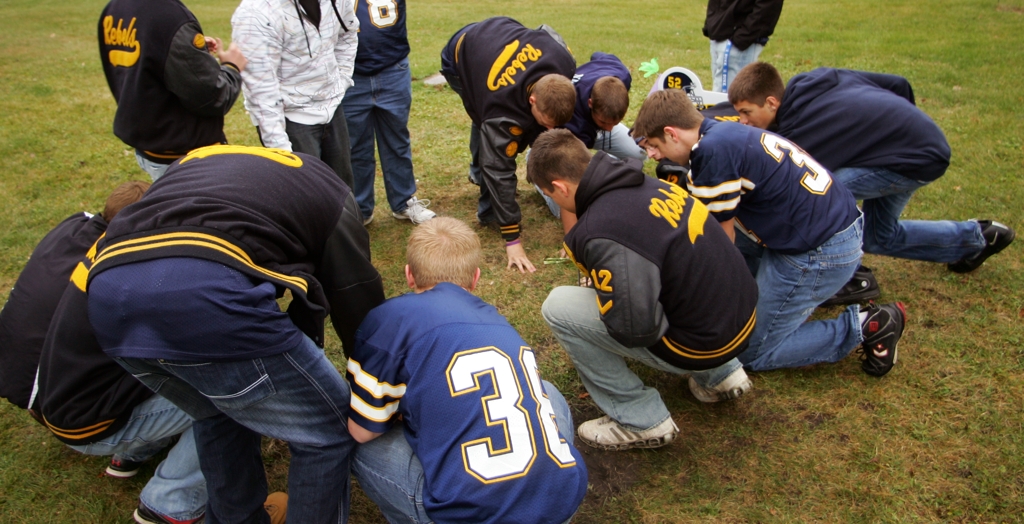 Players visit the grave right after school on game days. They stand around and tell stories about Aaron. Before they leave they put their hands on the ground and have a moment of silence. 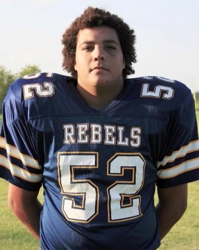 The school bells rang on a cool drizzling Tuesday afternoon, signaling the end of the school day for the students at Eagle Valley schools.

Many were excited for the first round of the 9 Man, Section 4 playoffs that were set to take place that night. The football players headed off to do their pregame routine.

This season, the routine for many of the Eagle Valley players has been different.

The players pile into their cars after school and drive to a cemetery located oustide Eagle Bend to pay tribute to their teammate Aaron Johnson, who died in a swimming accident in August.

At the cemetery, the players laugh, joke, and remember their friend and teammate, who was a big kid with a big sense of humor.

“Aaron definitely would have made fun of you for the clothes you’re wearing,” Jerod Nelson says to teammate Logan Riedel.

They recall stories about Aaron and his Geo Metro, quite the sight to be seen for a 260-pound kid.

After the players are done recalling stories about Aaron, they put their hands on the ground and had a moment of silence.

The tribute doesn’t stop there.

If you go into the locker room, you will see Aaron’s locker. The players posted a team photo on his locker and wrote his name and number below it.

The players and coaches also have a moment of silence before and after each game in honor of him.

Aaron was looking forward to his senior year and playing nose guard and center for the Rebels. He attended camp in Brainerd over the summer with 10 of his teammates.

He had high hopes for the season with such a good group of seniors.

“He was always talking and joking about how if we don’t win this year and go to the Fargodome, he was going to punch someone in the face,” Mock said.

The team also dedicated their season to him. And what a season it has been.

After Tuesday’s 48-26 win over Bertha-Hewitt in the first round of the playoffs, the Rebels sit at 9-0 on the season. The team could have used Aaron on a team that only have about 12 players who play regularly.

Aaron was a big kid who was tough to move on the field. He would have added some much needed size and depth to the team.

“At 260 pounds, he was pretty gentle, we were working on getting him to stay low, get mean and knock someone over,” head coach John Sieling said. “He would’ve been a force this year."

“I remember when we did form drills in practice, and even when he stood up, he would still destroy us,” teammate Blake Borst said.

“His passing has definitely motivated us to work harder,” Mock said. “During every practice we think about him and how he would be working 10 times harder than us."

Borst is one player who plays wherever he is needed whether that means he lines up at linebacker, offensive and defensive line, or fullback.

“Everyone needs to know every position, get reps there, and be in the best shape possible,” Borst said. “You play all game and don’t stop, because there is no one to come in for you.” 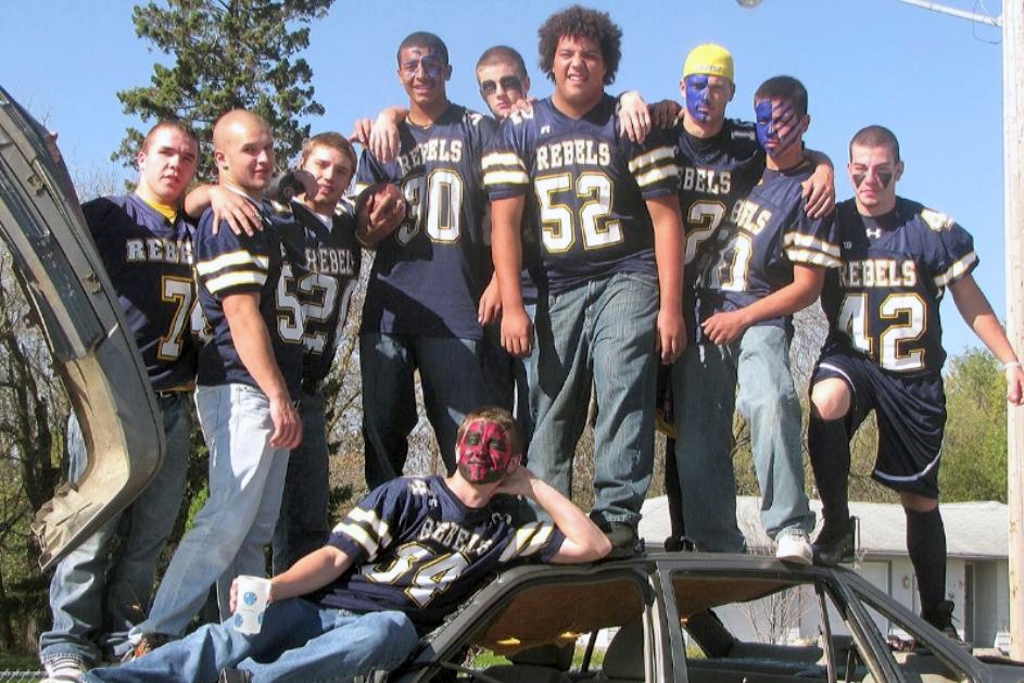 Aaron with his teammates during homecoming week last year. - Photo courtesy of the Independent News Herald 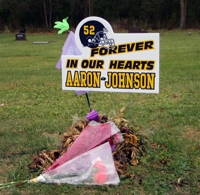 Many community members put yard signs out to honor Aaron. One of the yard signs is at his gravesite until his headstone is ready.

The tributes have not stopped with just the team.

The students, teachers, and community members have put in many hours working on fundraisers and benefits to help Aaron’s mother purchase a nice headstone for her son.

One benefit consisted of a pork sandwich donation dinner, a bake sale, and a local salon offered five-dollar haircuts with the money made going to the purchase of Aaron’s headstone. When the amount of money raised was more than the amount of the headstone, they decided to put the remainder into a scholarship in Aaron's name.

“A lot of community members have put in many hours of work,” assistant coach Andy Lancaster said. “For a kid so young, it shows a lot about him as an individual and how he was loved in the community.”

“When there is a tragedy in a small town community, people step up to the plate,” School Board member Sharon Notch said. “They donate food, they donate money, and they come and be there physically. Even if they didn’t know the person well, they lend a shoulder to someone who knew him better.”

In addition to the benefits, members in the community have put up yard signs stating “Forever in our hearts Aaron Johnson.” There are also window clings for cars and many students wear bracelets.

Aaron’s favorite color was purple, so during homecoming week, the school had “Purple Day,” where everyone wore purple to pay tribute to Aaron.

The football team got helmet decals that say “AJ 52” and the volleyball team put purple decals on the backs of their shoes this season.

The loss of a friend and teammate was tough for a team going into training camp, but the coaches and players have used it as motivation. “The players understand that they are playing for Aaron,” coach Sieling said.

“The team has become a lot closer, we’re like one big family now,” Mock said.
“Our goal is to win each game for Aaron.”

After their final regular season game against Parkers Prairie on, the Rebels had Aaron on their minds.

“We wanted to do it for him,” Borst said. “All he wanted was an undefeated season and to go to the Fargodome.”

“Going undefeated feels amazing, and after what happened with Aaron, we wanted to dedicate the season to him,” senior quarterback Tyler Oftedahl said. “This is the best way we can do that.”

Eagle Valley hosts Isle on Saturday, Oct. 29, for the second round of the section playoffs. You can count on the Rebels knowing Aaron will be on the field with them, being a great friend, teammate, and helping in any way he can. 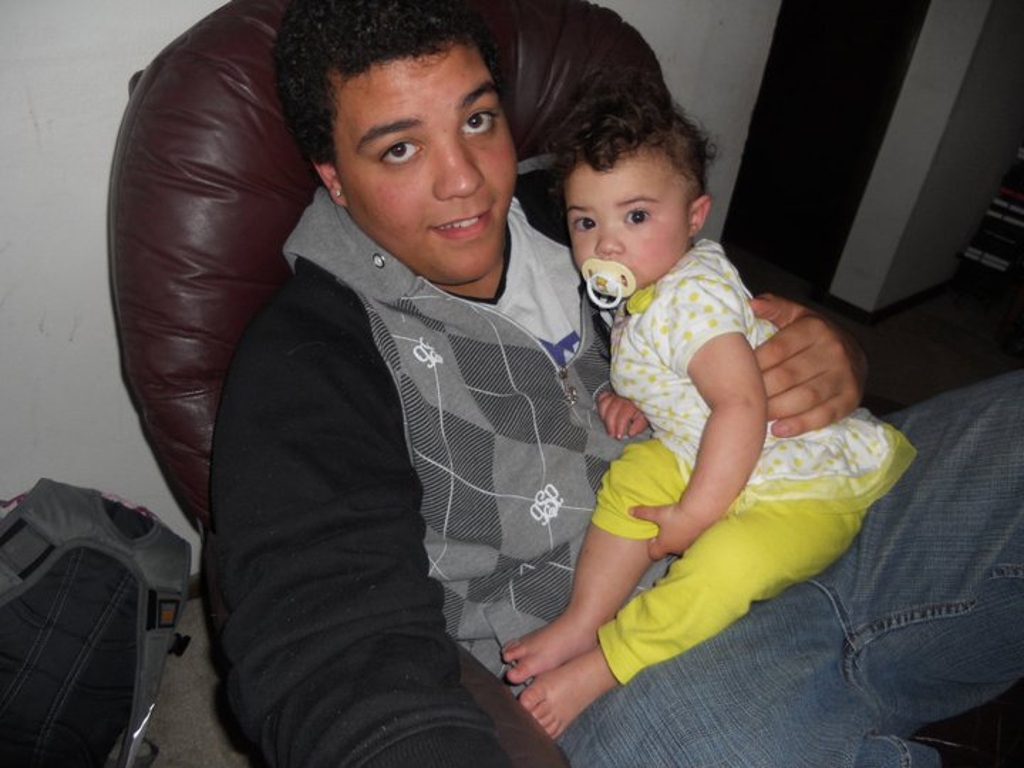 Aaron with his baby sister Brooklyn.