Quarterback Andrew Lindquist led the Zephyrs while the Packers suffered their first loss of the year. 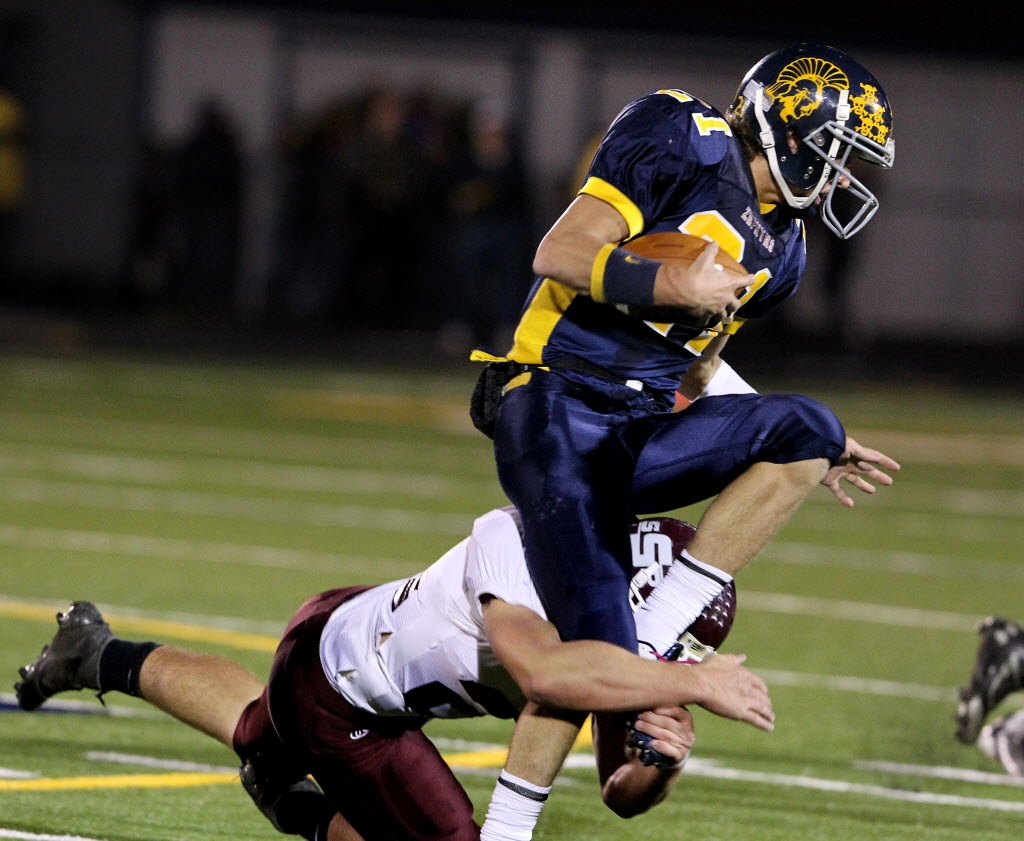 Mahtomedi quarterback Andrew Lindquist said being voted one of the Zephyrs captains meant even more considering an injury threatened to derail his football season.

He suffered a stress fracture in his foot in July from overtraining and saw his first significant action Friday against undefeated South St. Paul.

“The guys never gave up on me,” Lindquist said.

A similar attitude allowed Mah­tomedi to persevere for a 27-21 victory over the Packers, the No. 3 team in Class 4A. Back under center, Lindquist scored the Zephyrs’ first touchdown and threw for the next two. Before Friday, the Zephyrs scored 21 points or more only twice.

South St. Paul (6-1) outscored its first six opponents this season by an average margin of 37 points and recorded four shutouts. But four of those teams had one victory going into Friday.

Meanwhile, Mahtomedi (5-2) took its usual perch among the state’s top 4A teams to start the season before suffering losses to tough opponents St. Thomas Academy and Totino-Grace.

Lessons from those losses, plus Lindquist’s return, gave the Zephyrs belief they could start the season anew. Mahtomedi went 60 yards for a touchdown on its opening drive. Lindquist’s 1-yard touchdown run became the first points given up by South St. Paul in the first half this season.

Lindquist, the Zephyrs punter, later tried to pick up a fourth-and-9. Officials ruled his dive toward the first-down marker fell about a yard short and South St. Paul enjoyed a short field. Taking over at the Mahtomedi 38-yard line, the Packers got rolling on a 19-yard carry from quarterback Harrison Rund. He finished the drive with a 9-yard touchdown pass to Christian Rund.

Lindquist took charge by completing two touchdown passes in the second half. Michael Harris got behind the defense on a post-corner route, scoring a 18-yard touchdown on fourth-and-3 to make it 13-7.

Sura made his biggest play of the evening on the ensuing kickoff, returning the ball to the Packers 49-yard line. Rund later got loose for a 31-yard touchdown run and 14-13 South St. Paul lead.

Mahtomedi answered as Lindquist finished a drive finding younger brother, Zach, for a 9-yard TD pass and a 19-14 lead. The Zephyrs built a 27-14 lead before South St. Paul mounted a late charge.

A blocked punt, a Rund touchdown and a recovered onside kick left the Packers trailing 27-21 late. But Mahtomedi’s defense recovered a fumble to preserve the victory.

BROTHERS TO THE (BROKEN) BONE(S)

The emotional weight of Andrew Lindquist’s touchdown pass to younger brother Zach in Mahtomedi’s victory against South St. Paul makes it one of the season’s special plays.

In July, neither of them were a lock to play football. Andrew suffered a stress fracture in his foot from overtraining. And Zach was still recovering from breaking his knee cap during basketball season -- an injury that required surgery.
“We were really worried he might have to sit out the whole football season,” Andrew said. “But then God worked a miracle. The swelling went down and he was basically at full speed coming into camp.”
Zach, a 6-foot-4, 238-pound junior tight end, did not miss any time this fall. But Friday’s game was Andrew’s debut at quarterback.
“I was really nervous coming back but it was a real blessing from God to be out there again,” said Andrew, a 6-3, 172 pound senior.
He held up fine despite the drama provided by five lead changes. His second touchdown pass of the evening went 9-yards to Zach and gave Mahtomedi a third-quarter lead.
Making the play more unlikely, Andrew said Zach “broke his thumb two weeks ago so he’s wearing a cast. But as you can see, he can still catch the ball.”
The secret to getting the ball to a one-handed receiver, Andrew said, is “trying to get the ball up to him as high as you can. One hand is good enough. He’s always had good hands. His nickname on the team is Paws.”
The play of the Lindquist brothers set a tone for Friday’s victory. Now 5-2, the Zephyrs are once again deserving of consideration as a dangerous team in Class 4A. Next Wednesday marks the end of the regular season. Playoffs come next and Andrew Lindquist likes his team’s chances.
“I think this is actually the beginning of what we can do,” Andrew said. “What I saw that was different in this game than any other game, when our defense was down, our offensive picked them up. And the defense picked us up when the offense needed it. The team is coming together and getting hot going into the playoffs. We can forget about what happened earlier."