Stevo Klotz scored on a 1-yard run with 42 seconds left to give the Hawks a 10-7 victory. 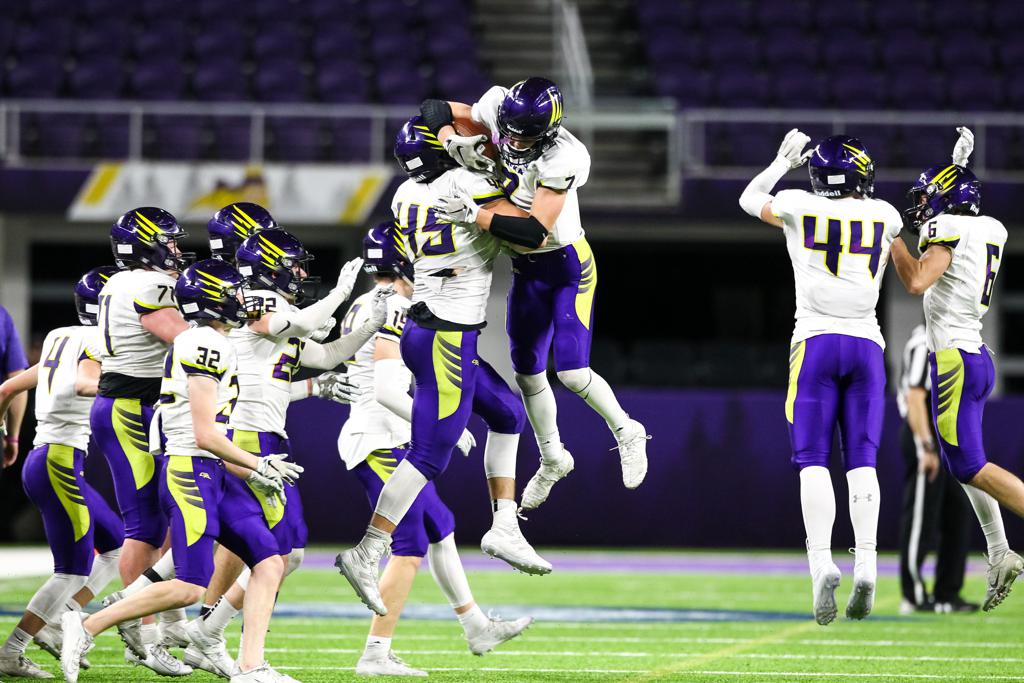 Chaska players celebrated after coming from behind to defeat St. Thomas Academy on Saturday to win the Class 5A Prep Bowl. Photo: David Berding • Special to the Star Tribune

For just over 45 minutes, the Class 5A state championship game was a tightly woven knot of defense, with few offensive highlights to speak of.

For the last 2:53, controlled turned chaotic.

Chaska put together a frantic 80-yard drive in 10 plays, getting a 1-yard touchdown run by running back/linebacker Stevo Klotz with 42 seconds left, and emerged with a 10-7 victory over St. Thomas Academy.

Until that fateful drive, Chaska (12-1) had done little to speak of offensively. Fortunately for the Hawks, St. Thomas Academy (11-2) could say the same.

“If you love defensive football, that was a fantastic game today,” St. Thomas Academy coach Dan O’Brien said. “Both defenses were outstanding.’’

Trailing 7-3, Chaska took over at its 20. Quarterback Griff Wirtz, who had completed just three passes in the game to that point, completed three passes for 53 yards on the drive. Chaska also benefited from three penalties to get into position to score — two pass interference calls and a targeting call at the St. Thomas Academy 5-yard line.

“We talked that we had one more drive left for a state championship,” Wirtz said. “One more drive for our dream to come true. We all just relied on each other and trusted everybody.”

With both teams’ strong reputations for stopping their foes, it was no surprise that the defenses controlled play throughout the first half.

The Hawks managed a 42-yard field goal by Nic Snuggerud to take a 3-0 lead.

Then a misplayed punt cost Chaska. The Hawks let a punt roll dead at their 3-yard line, costing them valuable field position and putting them at a disadvantage they couldn’t recover from.

St. Thomas Academy started its next two possessions well into Chaska territory. The Hawks pushed the Cadets backward the first time, But the next time St. Thomas Academy got the ball, it was at the Chaska 32 midway through the second quarter.

The Cadets’ offense finally started moving, highlighted by a 19-yard run by Love Adebayo, their biggest gain of the game. Six plays later, quarterback Baker Reding sneaked over from 1 yard out, giving St. Thomas Academy a 7-3 lead with just 38 seconds left in the half.

“We knew it was going to be tight game,” Dahl said. “We knew turnovers, we knew field position was important. It was tough going into the locker room because you feel like you’re playing OK but we just couldn’t get anything going.”

St. Thomas Academy had a chance to build its lead in the third quarter, but a 12-play drive that took 7:24 seconds off the clock wound up fruitless when Cadets running back Danny McFadden was dropped for a loss on fourth-and-4.

“We made a play to get off the field and that was huge for momentum,” Dahl said. ”If they put that thing in the end zone, it’s a different ballgame.”

Chaska got a 1-yard touchdown run by Stevo Klotz with 42 seconds left, capping an 80-yard, 10-play drive that was bolstered by three defensive penalties, to defeat St. Thomas Academy 10-7 in the Class 5A championship game.

For Chaska (12-1), it’s the first state championship in team history.

The Hawks opened the scoring with a 42-yard field goal by Nic Snuggerud in the first quarter.

St. Thomas Academy took the lead late in the second quarter on a 1-yard touchdown run by quarterback Baker Reding.

The Cadets held the lead and kept the Hawks' offense largely in check in the second half until the final drive.

St. Thomas Academy (11-2) lost in the championship game for the second consecutive year. 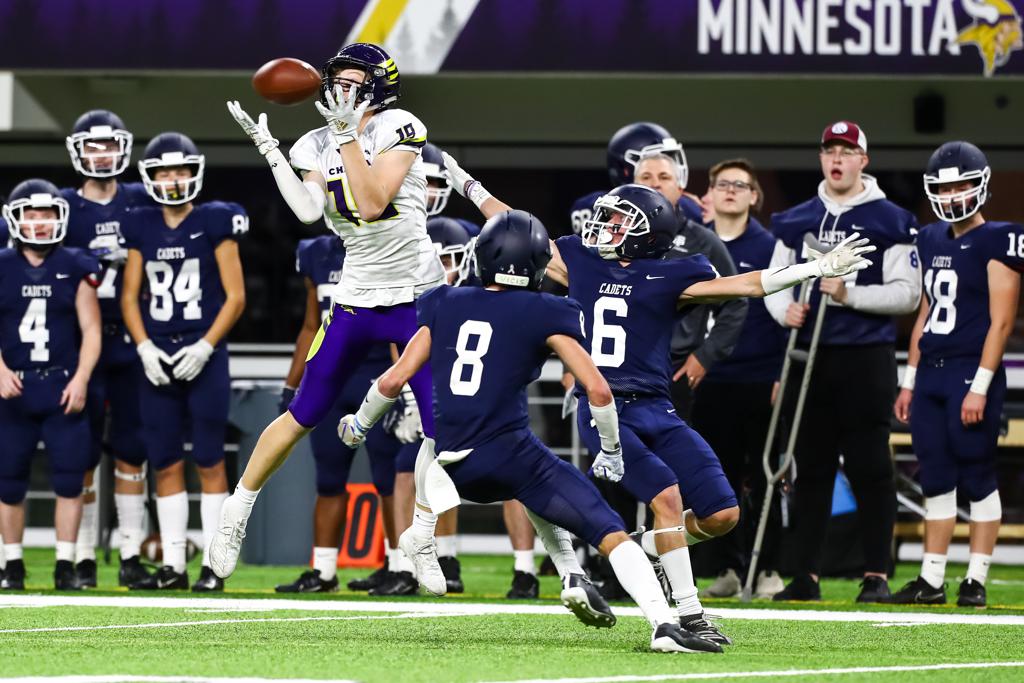