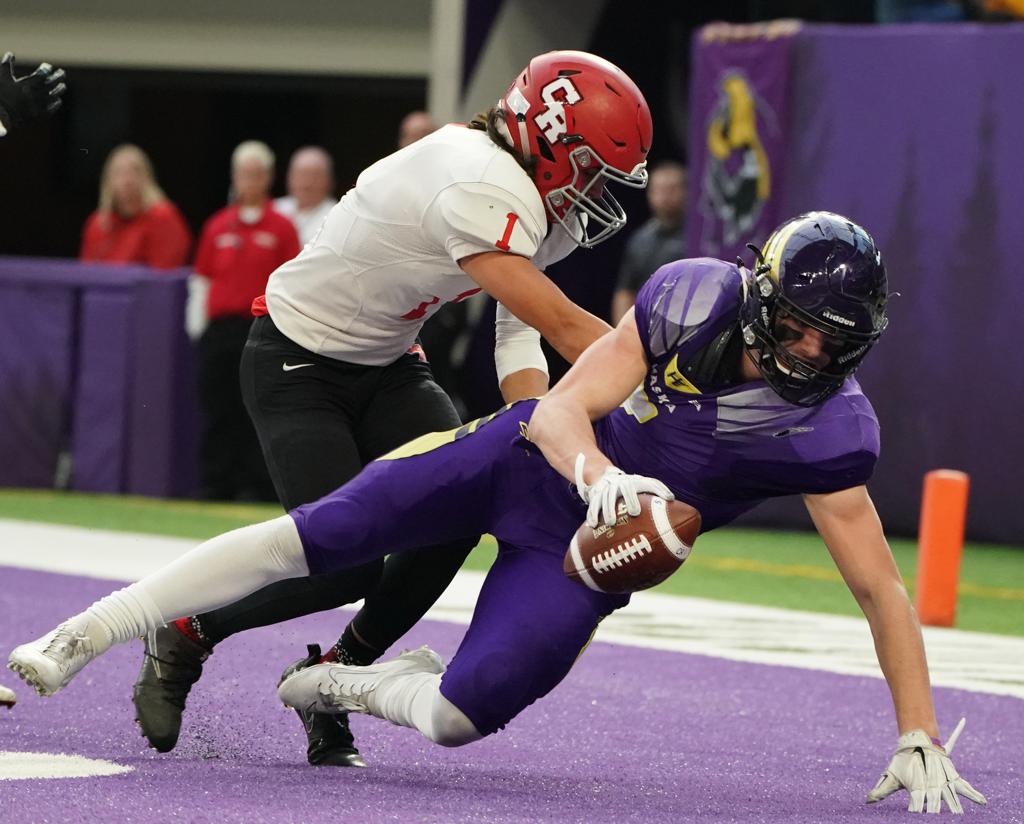 Chaska linebacker Stevo Klotz (above, scoring on a 36-yard touchdown run vs. Coon Rapids) doubles as a running back for the physical Hawks. Photo: Shari L. Gross • shari.gross@startribune.com

Chaska’s Marcus Holasek explained the caterpillars he and fellow senior linebacker Stevo Klotz are sporting on their upper lips: “Mustaches, mohawks or mullets. That’s kind of our motto this year. You have to have one of them. My mom won’t let me get the haircut so I’m going with the ‘stache.’ ”

That wouldn’t fly at St. Thomas Academy, the all-boys Catholic school with military leadership as part of its mission, and the Hawks’ opponent in Saturday’s Class 5A Prep Bowl.

Follicly speaking, the teams couldn’t be more different. High and tight St. Thomas Academy vs. do-what-you-like Chaska. On the field, however, both reached the 4 p.m. Saturday championship game at U.S. Bank Stadium by playing a physical, disciplined brand of football.

The teams met on Oct. 16, a 20-0 Chaska victory on the Hawks’ home field, but both teams were without injured regulars.

“I’m guessing they’ve gotten a lot better; so have we,” said Klotz, who also plays running back and posted 112 yards and a touchdown against the Cadets. “We’re going to come out and be physical and try to wear them down. That’s been our game plan this season.”

It’s a winning formula. Chaska (11-1) has posted five shutouts this season and reached its first state tournament championship game since 1974. The same playing style worked for St. Thomas Academy (11-1), a Prep Bowl qualifier for a second consecutive season and author of six victories by shutout.

“We know they are a good team and we know they won’t be the same as they were last time,” Holasek said. “Physically, we’ve got to come out and crack them right away.”

Holasek, a Star Tribune All Metro second-team selection, is “the quarterback of our defense,’’ said Klotz, an outside linebacker. “He likes to hit. He’s a big, tough kid.”

The pair are part of the “The Dirty Seven,” a nickname bestowed on the team’s defensive linemen and linebackers by senior linebacker Gabriel Kinneman.

Not to be outdone, the Chaska offensive line has two monikers, the “Pancake Platoon” and the “Big Nasties.” The former referrers to an offensive lineman knocking his man to the turf or grass. The latter reflects temperament, not tonnage.

Senior center and captain Eric Spielberger, who hits 200 pounds on a scale if he’s standing on cinder blocks, became an offensive lineman by accident as a freshman. The running back wasn’t paying attention and joined the wrong position group in practice. He never left, using deft footwork and becoming a master technician to anchor the front line.

“It was kind of satisfying to push someone over instead of running the ball,” Spielberger said.

“We kind of went head-to-head,” Spielberger said. “He’s a good player and they are one of the more disciplined teams we’ve faced. They come off the ball hard on every play.”

“Talented or not talented, if you play hard and you’re a physical football team, you’re going to be in ballgames,” Hawks coach Bryan Dahl said. “Our kids bought in and they’ve had success, so they hold one another to that standard.”