Wayzata bulldozes past Champlin Park to win 6A championship

Senior Christian Vasser, behind a powerful offensive line, tied a Prep Bowl record with five rushing touchdowns as the Trojans completed their undefeated season with a 35-20 victory. 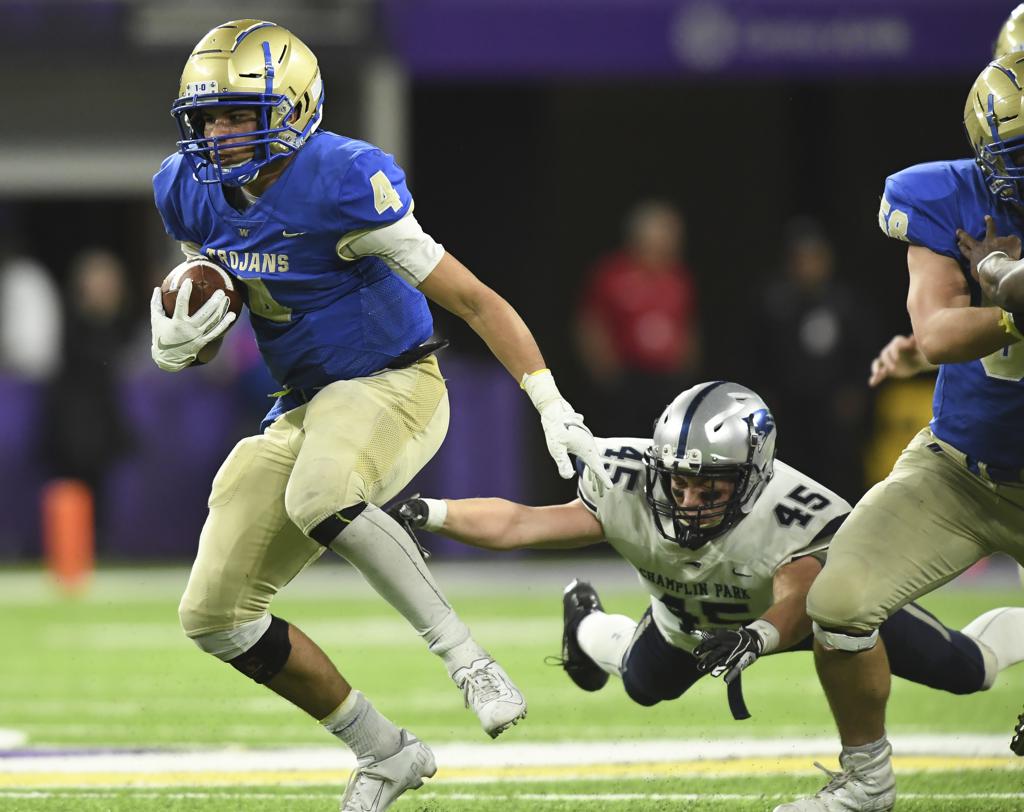 Wayzata running back Christian Vasser strolled onto the postgame interview platform looking like he had barely broken a sweat instead of setting a Prep Bowl standard as a workhorse running back.

Vasser was fresh from a 49-carry effort, five more than any predecessor had in a Prep Bowl game, and 285 yards. His five touchdowns tied a Prep Bowl record.

The result? A 35-20 victory over Champlin Park for the Class 6A state championship, capping a 13-0 season.

“That’s what he says every time I ask him that, too,” Wayzata coach Lambert Brown said with a broad smile.

After rushing for 269 yards and three touchdowns in a 28-14 victory over Lakeville South in the semifinals, Vasser went even farther on Friday at U.S. Bank Stadium. He spent much of the game running through Champlin Park arm tackles, around defensive ends and over unfortunate defensive backs.

On Wayzata’s five touchdown drives, Vasser carried the ball on 39 of the Trojans’ 42 plays. Not once in his 49 carries did he lose a yard.

An amazing performance, but Vasser refused to entertain thoughts of individual glory. He was just the ball carrier. There was so much more that went into his achievement.

“Most of the time, I’m 3, 4 yards before I hit any [defenders],” Vasser said in praise of his offensive line. “It was crazy running behind them and I’ll never forget it.”

While the Wayzata game plan may have looked simple — give it to Vasser and get out of the way — Brown said there was a lot more to it than is looked.

“Champlin Park worked really hard to take away the inside zone,” he said. “We really just ran about four dang plays, but did it with different personnel grouping and motions and shifts and trying to find an advantage. And Christian made some really, really good plays. He provided not only the spark, but the whole dang fire.”

Both teams were at their best offensively in the first half, trading the lead back and forth. Champlin Park took a 3-0 lead, Wayzata answered to make it 7-3. The Rebels scored again, the Trojans responded again. Champlin Park finally took a 17-14 lead just before halftime, but Wayzata wasn’t fazed.

Wayzata took the lead for good on a 4-yard run by Vasser in the third quarter and added to it on its next drive on Vasser’s fourth touchdown of the night for a 28-17 lead.

Champlin Park mustered a field goal to cut the lead to 28-20, but Vasser’s final score, capping a 10-play drive in which he carried the ball on every play, was a fitting end.

There’s no such thing as a one-man football team, but dang if Wayzata didn’t do its best to try.

Running back Christian Vasser had his second consecutive amazing outing in the state tournament, setting a Prep Bowl record with 49 rushing attempts for 285 yards and a record-tying five touchdowns to help Wayzata cap an undefeated season with a 35-20 victory over Champlin Park in the Class 6A championship game.

Vasser, who rushed for 269 yards and three touchdowns a 28-14 victory over Lakeville South in the semifinals, spent much of Friday running through Champlin Park arm tackles, around defensive ends and over unfortunate defensive backs.

On Wayzata’s first four four touchdown drives, Vasser carried the ball on 30 of Wayzata’s 33 plays, gaining positive yards on all but one of them.

The first half was a back-and-forth showcase, with each team showing off the best of its offense.

After spotting Champlin Park a 3-0 lead, Wayzata took a 7-3 lead on a 5-yard run by Vasser early in the second quarter.

The Rebels answered, going 58 yards in eight plays and getting a 3-yard scoring run from Shawn Shipman. They led 10-7.

Champlin Park bounced right back. Runs of 24 and 18 yards by quarterback Jaice Miller highlighted a 70-yard drive. Shipman sliced over from 7 yards out with 15 seconds left in the half, giving Champlin Park a 17-14 halftime lead.

The second half started poorly for Wayzata when quarterback Tom Schmidt threw an interception on its second play of the half.

But the Wayzata defense rose up and forced a Champlin Park punt, setting up their go-ahead drive.

The Trojans went 68 yards in seven plays, with Vasser scoring again on a 4-yard run for a 21-17 lead. The drive was special in that Wayzata actually completed a pass, 26 yard from Schmidt to Luke Bodine, setting up the score. It was Wayzata’s only pass completion of the game.

The Trojans extended their lead to 28-17 with Vasser carrying the ball eight times in nine plays. He scored his fourth touchdown of the night on a 3-yard run.

Champlin Park showed signs of life on its next possession, driving into position for a 26-yard field goal by Noah Vogelpohl, his second of the game.

But Wayzata went right back to the approach that had been producing so well all game. The Trojans went 74 yards in 10 plays with – guess who? – scoring on a 2-yard run, making the score 35-20.

Quarterback Jaice Miller rushed for 94 yards and passed for 80 for Champlin Park (11-2), while Shipman rushed for 56 yards and two scores. It’s the Rebels' third Prep Bowl loss in team history.