Senior Gabe Hagen ran back an interception for a score in the first quarter and hauled in two touchdown passes to help lead the Awesome Blossoms to an undefeated season. 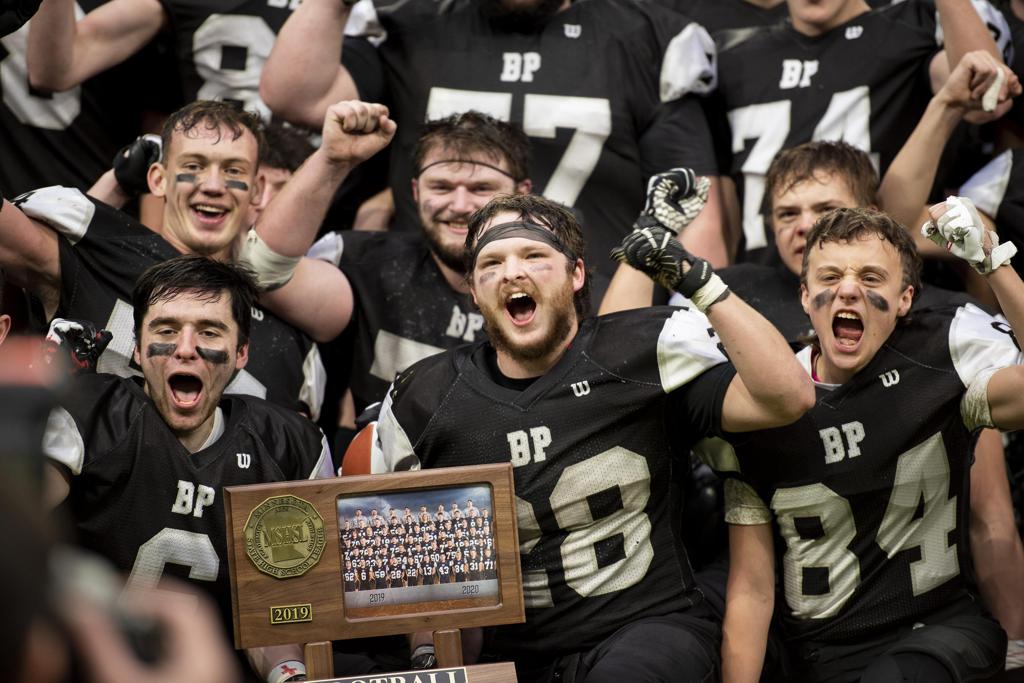 Blooming Prairie players celebrate with the Class 1A championship Friday after defeating BOLD 41-15 in the Prep Bowl at U.S. Bank Stadium. Photo: Steel Brooks, special to the Star Tribune

Not that the Blooming Prairie defensive end/receiver was an unknown commodity beforeo the Awesome Blossoms’ 41-15 victory over BOLD in the Class 1A championship game. At 6-5 and 250 pounds, Hagen stands out every time he steps on a high school football field.

But it was his play that stood tallest Friday at U.S. Bank Stadium. Using soft hands and relying on his 4.7 speed in the 40, Hagen caught eight passes for 125 yards and two touchdowns, including a juggling grab in the end zone while on his back.

“When the other team’s wide receivers are bigger than your offensive line, it’s a tough task,” BOLD coach Derek Flann said.

Hagen’s ability to catch the ball was his most significant contribution, but he first showed up on defense.

Blooming Prairie started the game by attacking the BOLD offense, using overload blitzes to get linemen running free at Warriors quarterback Jordan Sagedahl. The strategy results in six first-half sacks, never allowing Sagedahl the time to sit back and throw.

Luke Larkoski chased down Sagedahl on BOLD’s second possession, forcing an ill-advised throw that landed in Hagen’s hands. He ran 18 yards untouched for the game’s first score and a 7-0 lead.

“That’s huge,” Blooming Prairie coach Chad Gimbel said. “That definitely set the tone. If you score a special teams or defensive touchdown, you have an 80 percent better chance of winning.”

The two teams ping-ponged back and forth for the rest of the first half, with BOLD appearing to hold halftime momentum after scoring a touchdown late in the second quarter to cut the deficit to 21-15.

Blooming Prairie (13-0) stopped BOLD on the opening possession of the second half, then embarked on the game’s most significant drive. Quarterback Kaden Thomas drove the Blossoms 69 yards in nine plays, capped by Hagen’s circus catch touchdown, to open up a 28-15 lead. BOLD never threatened after that.

For BOLD, it was the second championship game loss in two years and fifth since 1992.

Thomas’ final stats — 23-for-30 for 298 yards and four touchdowns — would normally tag him as the player of the game, if not for the play of Hagen, who has committed to Minnesota State Mankato.

Asked what made him such a matchup nightmare, Hagen acknowledged “my size helped me the most.”

BOLD’s Gavin Vosika, who defended Hagen for much of the game, was succinct. “I don’t know what you want me to say. He’s a dude.” Vosika said.

Kaden Thomas passed for 298 yards and four touchdowns and Gabe Hagen scored three times, including an acrobatic touchdown reception while lying on his back, to pace Blooming Prairie to a 41-15 victory over No. 1-ranked BOLD in the Class 1A championship game.

Blooming Prairie (13-0), which had lost to BOLD in the 2018 Class 1A semifinals, leaned on a strong pass rush Friday to shut down the Warriors' vaunted passing attack at U.S. Bank Stadium.

The Awesome Blossoms took a 7-0 lead when Hagen intercepted BOLD quarterback Jordan Sagedahl, who was throwing while being tackled, and returned it 18 yards for a touchdown.

BOLD briefly took the lead on a 15-yard pass from Sagedahl to Drew Sagedahl, but Blooming Prairie added two scores and took a 21-15 halftime lead. BOLD never regained the lead after that.

BOLD (12-1) lost in the Class 1A championship game for the second consecutive season. 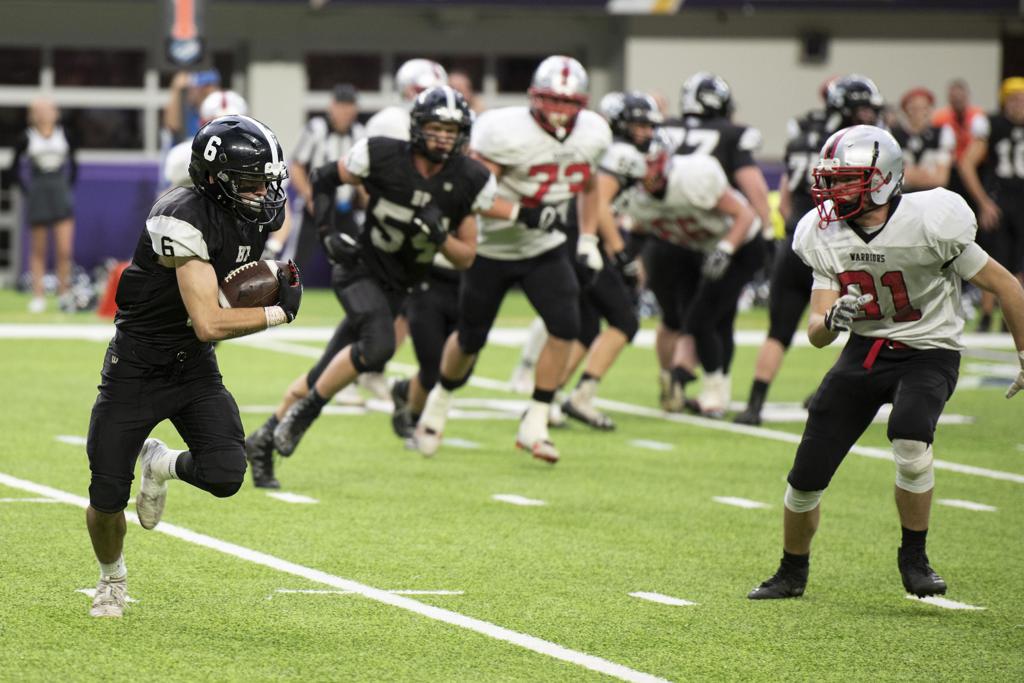 Blooming Prairie receiver Alex Baldwin (6) ran with the ball in the second quarter against BOLD on Friday at U.S. Bank Stadium. Photo: Steel Brooks, special to the Star Tribune