The 6A matchup is the right one, Jalen Suggs continues to dazzle, and a rematchup in 5A between two teams that played each other in the last game of the regular season. 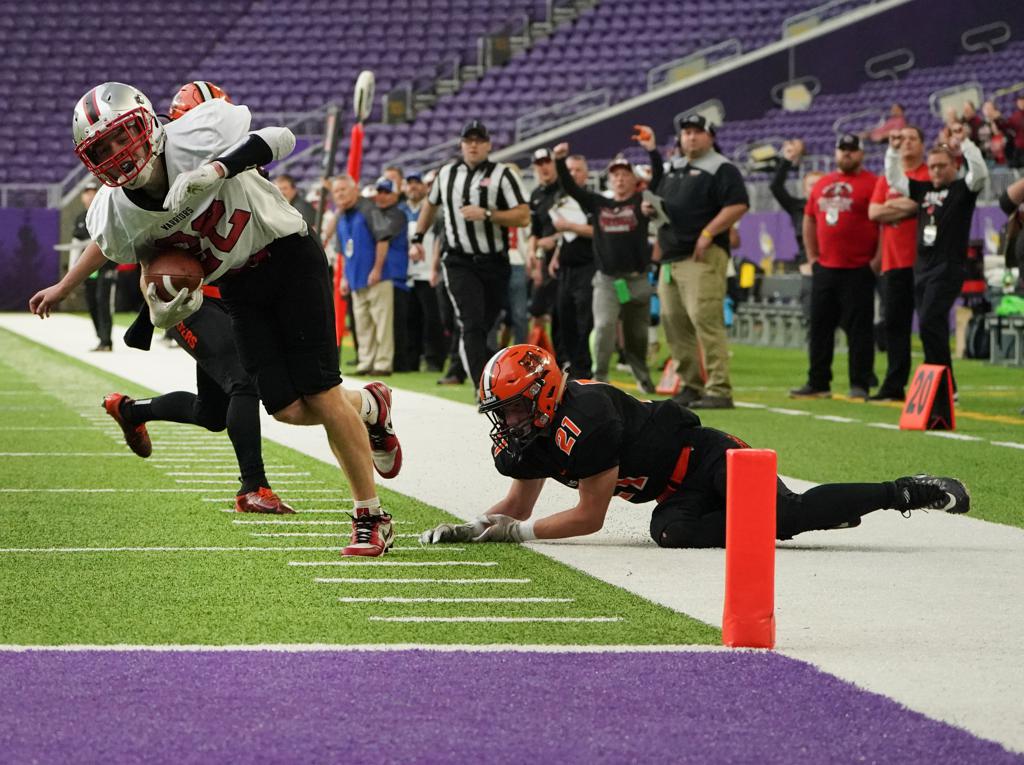 BOLD wide receiver Gavin Vosika (22) is one of his team’s difference-makers, and one of several who are key to which teams will win in Prep Bowl games on Nov. 29 and 30 at U.S. Bank Stadium. Photo: Shari L. Gross • shari.gross@startribune.com

Staff writer Jim Paulsen spent Thursday, Friday and Saturday covering the football state tournament semifinals at U.S. Bank Stadium. Here are 10 things — looking back and glancing ahead — about what he saw. Reminder: The Prep Bowl is Nov. 29-30.

1. The right 6A teams are left

Sentiment swirled for an all-Lakeville final, but the bracket played out to put the two most worthy large-school teams in the championship game. Wayzata is undefeated for a reason, with a relentless offense and a defense that imposes its will on opponents. Champlin Park is one point from a perfect season, the only blemish a 21-20 loss at tough Centennial in Week 3. The Rebels play rock-’em, sock-’em defense and quarterback Jaice Miller is peaking at the right time.

2. Rebirth of an old scheme

Football is a copycat game and the rise of Elk River and its old-school power-T offense has led to more teams using it with success. Lakeville South has made two consecutive Class 6A semifinals with it. Barnesville uses it to great success. Browerville/Eagle Valley installed it before this season and made the Class 1A semifinals. Expect to see the power-T more frequently in the future.

Scheme can only take a team so far, however. Coaches will always say that players win games and high-level talent is plentiful in the smaller classes. Class 1A BOLD boasts elite-level players in QB Jordan Sagedahl and WR/RB Gavin Vosika. Class 2A Caledonia has the athletic King brothers, Noah and Eli, as anchors to its wide-open passing attack. The Warriors will face a Minneapolis North team with speedy RB Terrance Kamara and WR Rio Sanders. Class 3A Pierz has Mathais Algarin and there’s a glut of talent at Class 4A SMB with Kaden Johnson, Terry Lockett and Jalen Suggs.

The difference in the Nine-Man semifinals came down to two players. One was QB Abraham Stoesz of Mountain Lake, who had 325 yards of total offense and accounted for four TD (two rushing, two throwing) in a 45-6 rout of Win-E-Mac. The other was RB Tyler Timmerman of Hancock, who was nearly unstoppable with 240 yards and three TDs rushing, 61 and a TD receiving, and a 75-yard kickoff return for a touchdown.

Class 4A Rocori had two losses going into its game with undefeated Winona, but the Spartans laughed off a 14-7 halftime deficit to win in a rout, 48-24. Dassel-Cokato has three losses, but the Chargers, according to coach Ryan Weinandt, showed “a ton of resiliency” in holding on to defeat Annandale in the 3A semifinals. 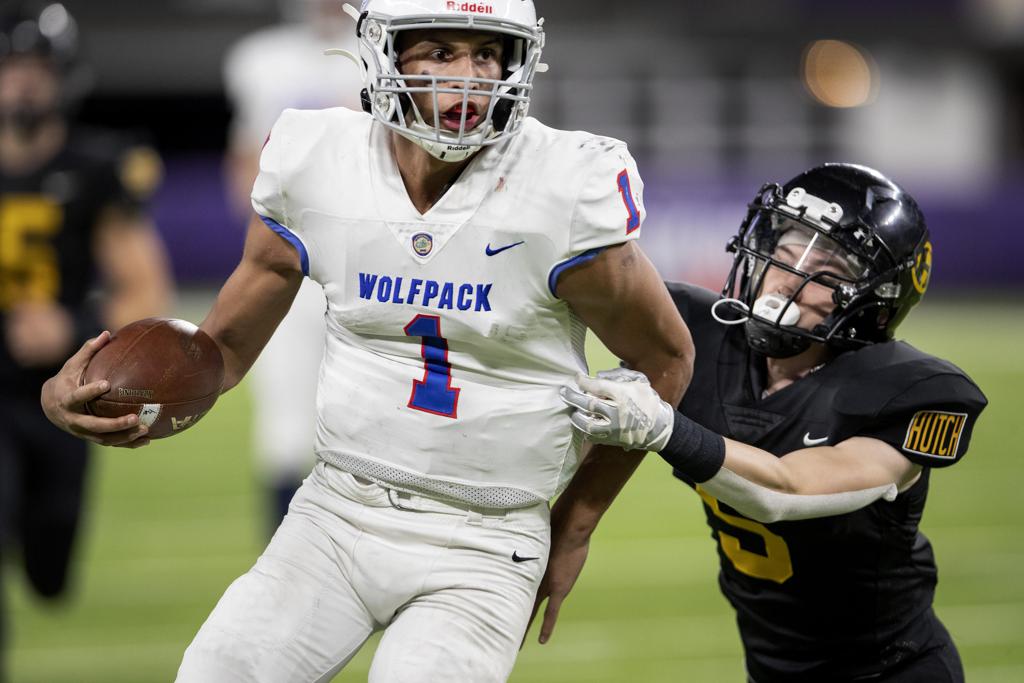 Watching the SMB quarterback, a once-in-a-decade athlete, toy with Hutchinson in fourth quarter of a 22-16 victory was special. He started the quarter with an interception (his second of the game), then completed eight of 10 passes, two for touchdowns, on consecutive crunchtime drives. Often, he seemed to invite pressure, only to scramble away, buy time and find an open receiver. What can’t he do?

Climate-controlled U.S. Bank Stadium and its fast turf is tailor-made for teams with speed. St. Thomas Academy made Elk River look slow and plodding in a 53-16 victory. Caledonia’s cadre of speedy skill players had the Barnesville defense chasing shadows. Minneapolis North answered every challenge from Paynesville with electricity in the open field.

St. Thomas Academy’s only loss this season was to Chaska in the regular season finale, a 21-0 Hawks victory. The Cadets and the Hawks get a rematch in the Class 5A final. “They held us in check all night long,” St. Thomas coach Dan O’Brien said. “You hate to ever say a loss is a good thing, but in this particular case, it helped us a little bit. We were able to refocus.”

It’s been more than five years — 1,829 days as of Tuesday — since Caledonia lost a game, a streak of 67 games. The state record for consecutive victories is 76, set by Stephen-Argyle from 2003-2008. Caledonia will match Stephen-Argyle’s record of five consecutive state titles if it defeats Minneapolis North in the Class 2A final. Setting a new state-record winning streak would likely happen in the first round of the 2020 section playoffs.

The average score of the 14 semifinals games was 40-16. Two games — Pierz vs. Jackson County Central in 3A, Wayzata vs. Lakeville South in 6A — pitted the top two teams in the final AP state poll against each other. The only meeting of No. 1 vs. No. 2 in the Prep Bowl will be in Class 1A, when BOLD takes on Blooming Prairie. Only Class 6A seeds. Doing the same for the other six classes would improve chances of the best possible championship game matchups.