The Awesome Blossoms, led by senior Matthew Pryor, amassed 431 yards of offense en route to a 41-0 victory over Ada-Borup. 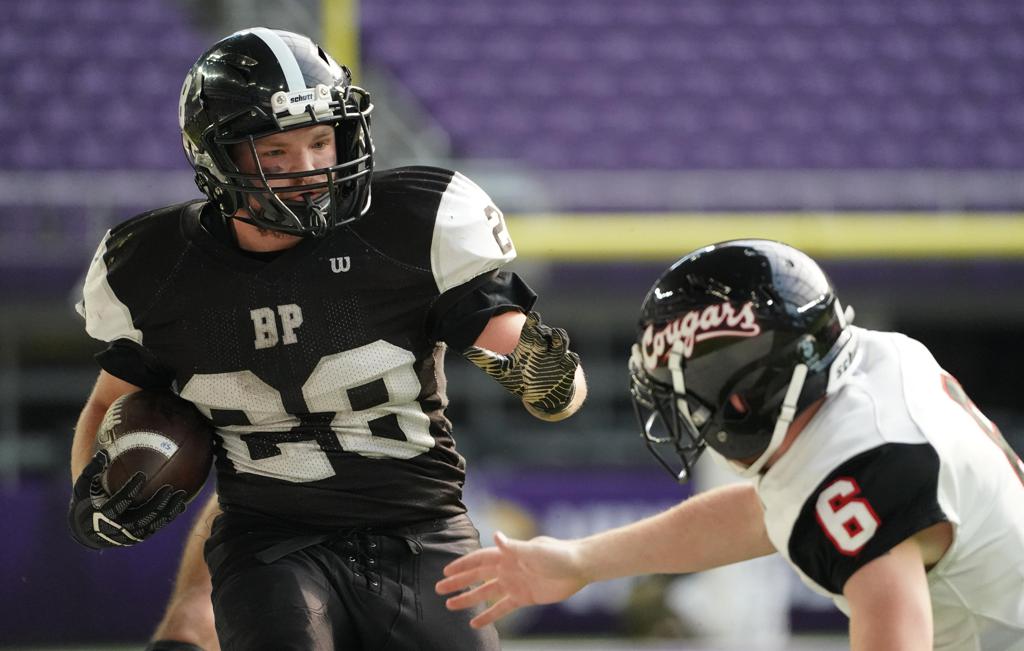 His team facing third-and-12 midway through the second quarter against Ada-Borup, Blooming Prairie coach Chad Gimbel called timeout with his team at the line of scrimmage.

When play resumed, the Awesome Blossoms lined up in a similar formation, with four receivers out wide and running back Matthew Pryor flanking quarterback Kaden Thomas. The snap went to Thomas, who looked out as if he planned to pass. Instead, he handed the ball to Pryor, who rushed for 37 yards to set up Blooming Prairie's third of four first-half touchdowns.

It was the team's longest play for scrimmage in a 41-0 victory over Ada-Borup in a Class 1A semifinal Saturday at U.S. Bank Stadium. The win secured the team's first Prep Bowl appearance.

Pryor rushed for 183 yards and three touchdowns, leading a Blooming Prairie offense that gained 431 yards. Thomas threw for 137 yards and two touchdowns, including a 47-yarder late in the second quarter to Gabe Hagen.

The second-quarter draw play "popped in my head a little bit late," longtime Blooming Prairie coach Chad Gimbel said, explaining the timeout. His voiced welled with emotion when asked what it meant to reach the Prep Bowl.

"To finally break through and get that opportunity, that's a huge step for us and for our program and for our kids," he said. 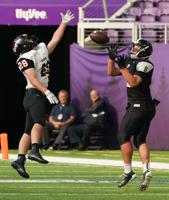 "They did everything we saw on tape," Cougars coach Paul Tinjum said. "They just did it well."

Pryor, a senior running back, scored Blooming Prairie's first touchdown 98 seconds into the game, rushing for an 11-yard score. He added his second score midway through the second quarter, capping a long drive that included the 37-yard draw play with a 2-yard rush.

The Awesome Blossoms' defense held Ada-Borup under 30 yards of offense in the first half, forcing four punts and two turnovers on downs. The Cougars threatened just once — after a long interception return by Beau Fetting — but a second-down tackle for a loss by Jarrett Larson and a third-down sack by Hagen killed the drive.

"Our motto is, 'Next play. Forget about the last play,'" Pryor said. "All of us just forgot about [the interception] and kept playing hard-nose football."

Hagen, a 248-pound receiver who has committed to Minnesota State, caught the 47-yard score late in the first half. He caught a fade pass from Thomas and sprinted past the Ada-Borup defender into the end zone.

"He's a crazy wide receiver. Very talented," Pryor said. "A lot of teams I'm sure just game plan against taking him away, but he's so athletic and fast that you can't take him away."

Pryor added his third score in the third quarter, and Archer scored in the fourth.

Ada Borup did not drive into the Blooming Prairie red zone until late in the fourth quarter. Gwin and Sylas Larson and recovered turnovers, in addition to Fetting.

Blooming Prairie, which allowed just 91 rushing yards on 40 attempts, "always had a person plugging the hole," Tinjum said.  "… They're hard to move in every discipline. Whatever you do, they'd cover it up."

He said all five of his team's losses the past three years — since it moved into Class 1A from Nine-Man — have come against unbeaten teams.

Matthew Pryor rushed for three touchdowns and Blooming Prairie outgained Ada-Borup by 290 yards in a 41-0 victory in a Class 1A semifinal at U.S. Bank Stadium.

Pryor, a senior running back, rushed for two of his three scores in the first half Saturday as Blooming Prairie (12-0) built a 27-0 lead. One of them capped a 71-yard drive, on which he rushed for 61 yards, and the other, an 11-yarder, was the team's first score.

Kaden Thomas threw for two first-half scores for the Awesome Blossoms, including a 47-yarder to senior Gabe Hagen, a 248-pound receiver who has committed to Minnesota State.

Hagen also had a third-down sack for an 11-yard loss when he shedded an Ada-Borup blocker and tackled quarterback Preston Gwin with one hand. Blooming Prairie held Ada-Borup to 141 yards of offense.

Karson Vigeland also caught a touchdown pass, and Tyler Archer rushed for a score for Blooming Prairie, which is making its second consecutive state-tournament appearance and its ninth overall.

The Awesome Blossoms, who amassed 431 yards of offense, secured their first state-championship-game appearance with the victory.

Their defense forced six punts and turned the Cougars over on downs four times.

Ada-Borup (10-2) had won 10 consecutive games after a season-opening loss to Class 2A state tournament semifinalist Barnesville.