A 14-yard touchdown pass to Savion Robinson with 50 seconds left in the game gave the Wolfpack its margin of victory. 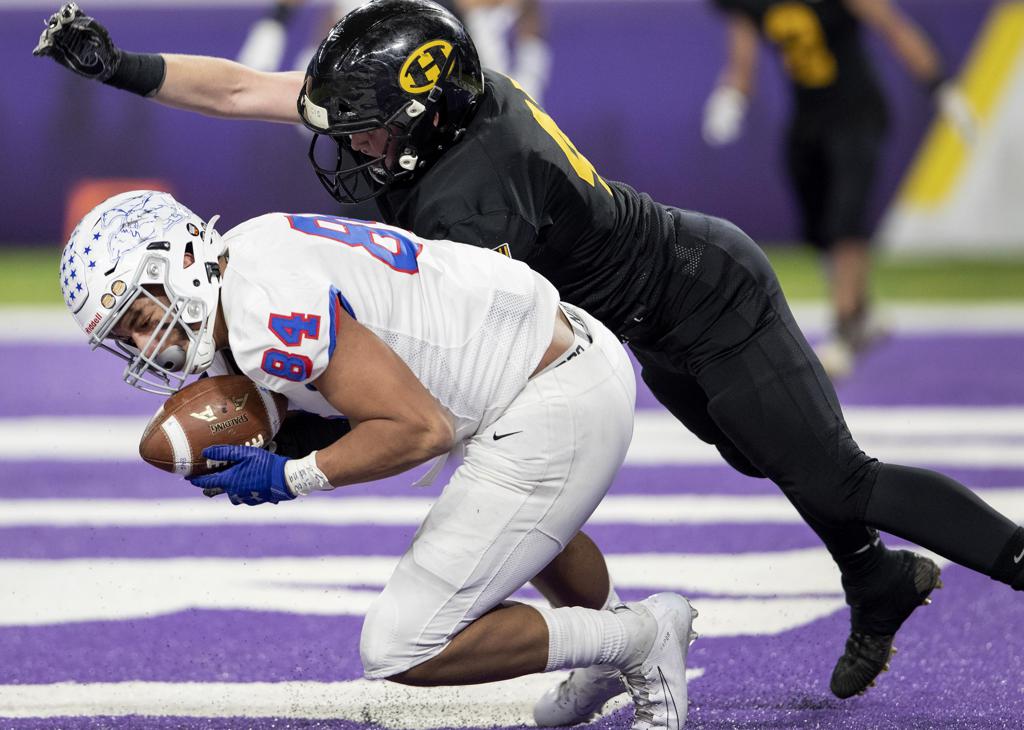 SMB's Kaden Johnson caught the first of teammate Jalen Suggs' three touchdown passes in the game, this one in the second quarter. Photo: CARLOS GONZALEZ • cgonzalez@startribune.com

Suggs wasn’t too concerned about his “dings and bruises,” symbols of the physical game his defending Prep Bowl champions won 22-16 against Hutchinson.

“They play hard; they’ve got some big boys up front,” Suggs said. “They come and you fast and hard until you break. I’ve got to give credit to my guys. We didn’t break; we stayed resilient.”

Suggs threw for three touchdowns and intercepted two passes. The second of those interceptions came on the first play of the fourth quarter as Hutchinson sought to continue executing coach Andy Rostberg’s game plan to “lean on them and grind it out and wear them out.”

Suggs hit back, grabbing quarterback Russell Corrigan’s pass attempt and returning it to the Tigers’ 35-yard line. A few players later, Suggs threw a 24-yard touchdown to Judah Thomas for a 16-8 lead.

Hutchinson (11-1) drew even on a nine-play, 80-yard drive capped by a 15-yard Corrigan touchdown run. Corrigan, a 240-pound former tight end recruited to Boise State, pounded out 52 yards rushing in the game. 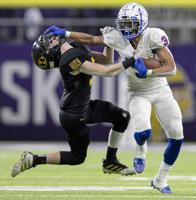 But Suggs, already revered as one of Minnesota’s all-time great football and basketball players, kept the Wolfpack (12-0) on pace for the go-ahead score. He feinted and slipped would-be tacklers as he ran for 102 yards and threw for 210 yards.

“He’s one of the most athletic kids we’ve had to defend,” Rostberg said. “There are not many better than him as far as being able to extend plays with his feet.”

Suggs the game-changer became a play-changer to make the evening’s final big play possible in the final minute.

“He called a hitch but sorry, coach,” Suggs said as he looked left toward a smiling Chris Goodwin, “I changed the play up a little bit.”

Suggs audibled to a deeper hitch route, sending Savion Robinson 14 yards to the end zone. It was a play they started working on during August practices.

Suggs said he saw the Tigers’ defensive back turn his hips, knew Robinson had him beat and “let it go before he even broke out of his route.”

Jalen Suggs threw for three touchdowns and intercepted two passes, leading SMB to a 22-16 victory against Hutchinson in Thursday’s Class 4A semifinal at U.S. Bank Stadium.

Two of those touchdowns and one interception came in the fourth quarter as the defending Prep Bowl champion Wolfpack (12-0) got the better of a back-and-forth battle with Hutchinson.

Suggs, already revered as one of Minnesota’s all-time great football and basketball players, intercepted a pass to kill a promising Tigers’ drive and returned it to the Hutchinson 35-yard line. A few players later, he threw a 24-yard touchdown to Judah Thomas for a 16-8 lead.

The lead didn’t last. Hutchinson (11-1) drew even on a nine-play, 80-yard drive capped by a 15-yard touchdown run by quarterback Russell Corrigan.

But Suggs, one play after limping toward the sidelines, made the game’s last big play. He tossed a 14-yard touchdown to Savion Robinson with 50 seconds to play, extending the Wolfpack’s season and 25-game winning streak.

SMB is a co-op of Blake, Minnehaha Academy and St. Paul Academy.

SMB answered with a 59-yard drive aided by 20 yards in Hutchinson penalties. Suggs hit Kaden Johnson in the end zone from 12 yards out.

Each team's offense leaned on less-typical modes of transportation. Corrigan threw for 74 yards in the first half while his SMB counterpart Suggs ran for 62 yards. Each quarterback threw an interception and Suggs also lost a fumble.