Minneapolis North powers past Paynesville in 2A semifinal

The Polars trailed by four at halftime before exploding for four touchdowns en route to a 44-32 victory. 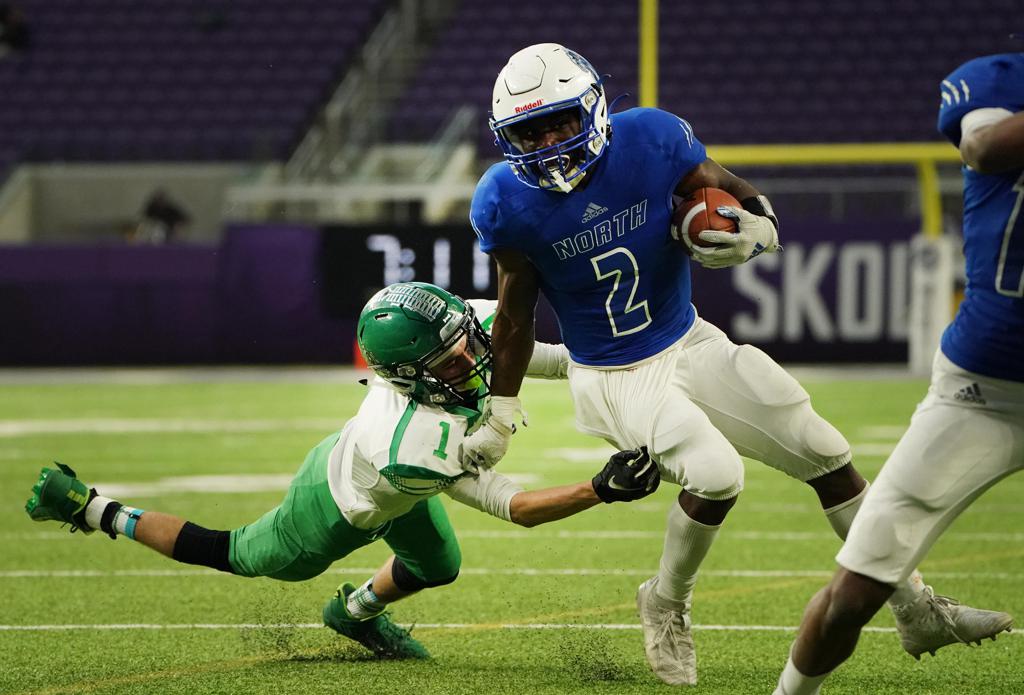 Minneapolis North running back Terrance Kamara (2) escaped the grasp of Paynesville cornerback Caden Spanier (1) during this run in the second half. Kamara rushed for four touchdowns, including three in the second half. Photo: Shari L. Gross ¥ shari.gross

It was all about effort, Minneapolis North coach Charles Adams III said. Well, that and a little defensive adjustment.

After a first half in which the undefeated Polars gave up 237 yards and 18 points, they tightened up their defense and made things much harder for Paynesville en route to a 44-32 victory Thursday in a Class 2A semifinal.

Adams drew up halftime adjustments and the Polars (12-0) responded, largely shutting down the Paynesville rushing game.

Holes that seemed so large for the Bulldogs (10-2), who scored on three of their four first-half possessions leading to an 18-14 halftime lead, were no longer there. And whenever Paynesville quarterback Grady Fuchs looked to pass, an onrushing Polar closed in.

“A lot of the stuff in the first half was effort,” Adams said. “If something’s going wrong, it means we’re not doing something right. It was a matter of drawing something out and showing what we expect of them.”

Paynesville lineman Spence Evans said, “In the first half, they were going with mostly a four-man line, which is easier to move than five. In the second half, they put some guys in who were big and really fast, too.” 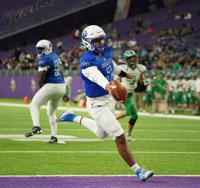 While North’s defense came around, the offense ran smoothly all game. Running back Terrance Kamara racked up 205 yards and four touchdowns.

Quarterback Zach Yeager ran for 41 yards and a touchdown and passed for 35 yards. Sophomore receiver Rio Sanders was electric with the ball in his hands, with 92 yards of total offense and a touchdown on just seven touches.

The game turned North’s way in the third quarter when Kamara scored two touchdowns in a span of 2:28. One capped the Polars’ opening drive of the half, the other a direct result of a Paynesville fumble. The scores turned a four-point North deficit into a 30-18 lead.

Minneapolis North scored two touchdowns in a 2:32 span early in the third quarter to take a 12-point lead, then outscored Paynesville the rest of the way en route to a 44-32 victory in a Class 2A semifinal Thursday at U.S. Bank Stadium.

Terrance Kamara rushed for 205 yards and four touchdowns for the Polars (12-0), including a fourth-quarter 25-yard run that extended the Polars’ lead after the Bulldogs had pulled within six points.

The Polars, trailing 18-14 at halftime, scored four touchdowns in the second half, three of them on runs by Kamara.

Minneapolis North advances to play in the Prep Bowl on Nov. 29.