Sam Emmerich rushed for two TDs in the first half to give the Lakers a needed cushion before Kyle Haas took over in the fourth quarter. 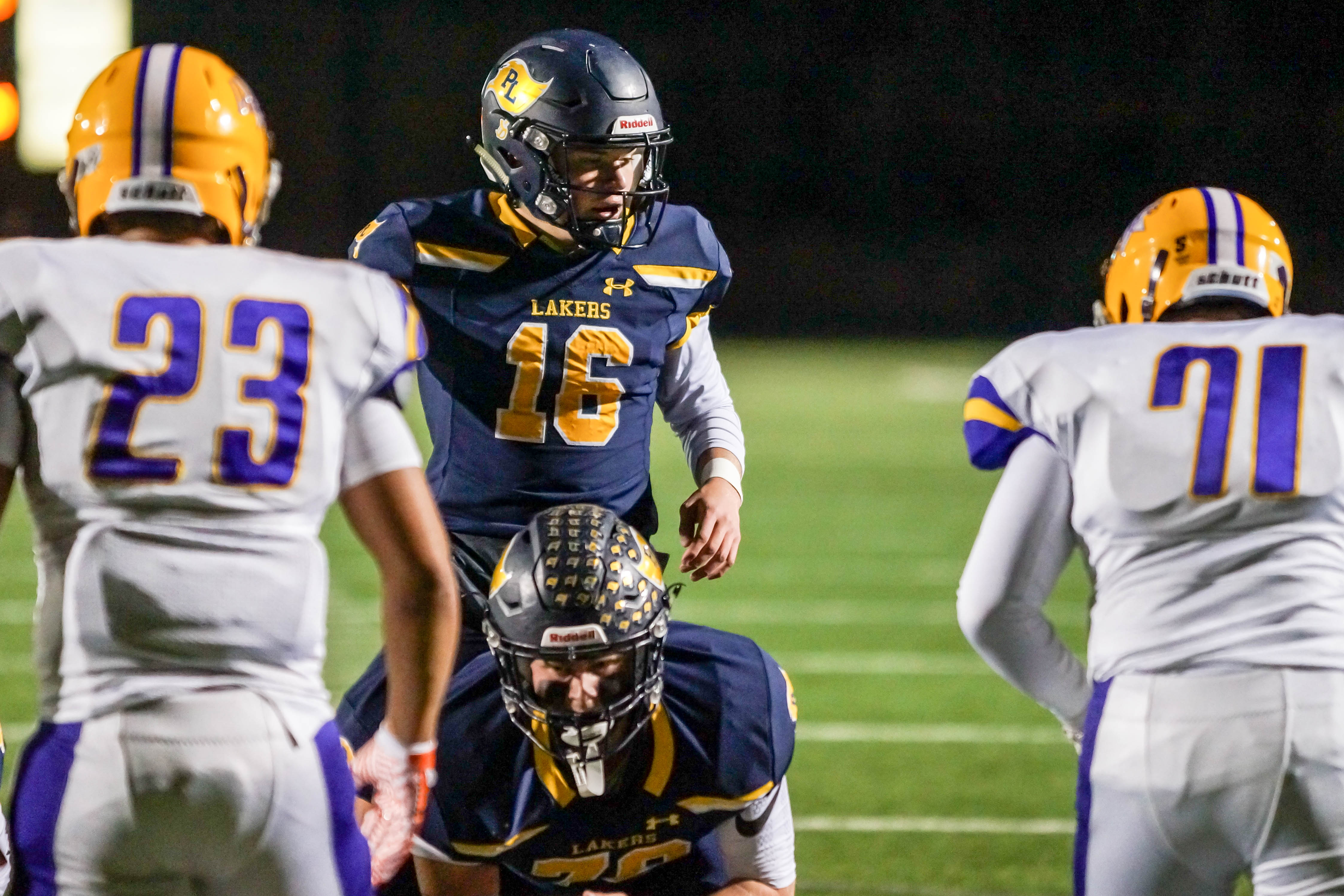 Prior Lake quarterback Kyle Haas barks out signals during the Class 6A state tournament game Friday against Cretin-Derham Hall. The Lakers beat the visiting Raiders 20-14. Photo by Korey McDermott, SportsEngine

Starting in place of injured senior quarterback Nate Raddatz, Prior Lake sophomore quarterback Kyle Haas threw probably the biggest touchdown pass of his career to senior wide receiver Austin Gordon with 2:42 left in the fourth quarter, sealing the Lakers’ 20-14 win over Cretin-Derham Hall in the first round of the Class 6A state tournament.

In front of a noisy crowd at Dan Patch Stadium in Prior Lake, the Lakers (5-4) jumped out to a 14-0 lead in the first half after two short touchdown runs by senior running back Sam Emmerich.

“You can’t relax,” Prior Lake coach Matt Gegenheimer said. “In 6A football, most games come down to a handful of plays and you can’t relax ever. You have to be able to run the football at this level and I think we did a good job of that.” 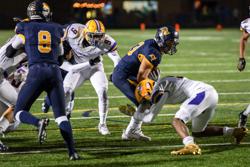 The Cretin-Derham Hall (4-5) offense, which came into the game averaging more than 350 yards of offense per outing, was stifled by an impressive showing from the Prior Lake defense.

Cretin-Derham Hall senior quarterback Preston Thelemann completed four of his eight first-half passing attempts for 38 yards, and senior running back Tony Underwood had 44 yards on 13 carries. Gegenheimer credited his defensive line for their play in the first half.

“We knew that their quarterback was good about making plays with his feet,” Gegenheimer said. “We’re undersized for pretty much everyone we play, but our defensive line plays fast and relentless. They were able to get good pressure when we needed it.”

Prior Lake turnovers kept the game close in the second half. Three fumbles, including one that went out the side of the Cretin-Derham end zone for a touchback, kept the Raiders within two scores for most of the second half.

“We had a lot of turnovers in the game, but when our offense or defense needed to step up, they did,” Haas said. “We had each other’s backs tonight.”

After the second fumble, which came a good punt return for the Lakers, the Raiders were finally able to crack the scoreboard. The turnover led to a 61-yard touchdown pass on the next possession from Thelemann to sophomore receiver Tre Holloman. The extra point made it a 14-7 game.

“We didn’t make some plays when we needed to in the second half,” Gegenheimer said. “But overall, I was happy with our effort on defense.”

The touchdown pass was followed by six straight possessions, three by each side, where neither team could find anything to exploit in each others’ defenses. But finally, after a Prior Lake defensive stand and a punt return to the Raiders’ 46-yard line, the Lakers found their magic in their final offensive drive with 4:58 left on the clock.

Haas, who finished with three of five passes completed for 80 yards, connected on a 21-yard pass with junior running back Tyler Shaver on third and eight. Then, three plays later, Haas’ found Gordon.

“I was giving him a hard time for never throwing me the ball in practice,” Gordon said. “Coach said at halftime that the play was going to work.”

The Raiders’ Thelemann, who completed 11 of 21 passes for 123 yards and two TDs, found junior wide receiver Marselio Mendez for an 11-yard score with 1:26 left on the clock, but the ensuing onside kick was recovered by senior Matt Becker of the Lakers. Prior Lake ran out the clock and celebrated their victory.

“The schedule we played was brutal,” Gegenheimer said. “But we weren’t ready to say goodbye just yet.” 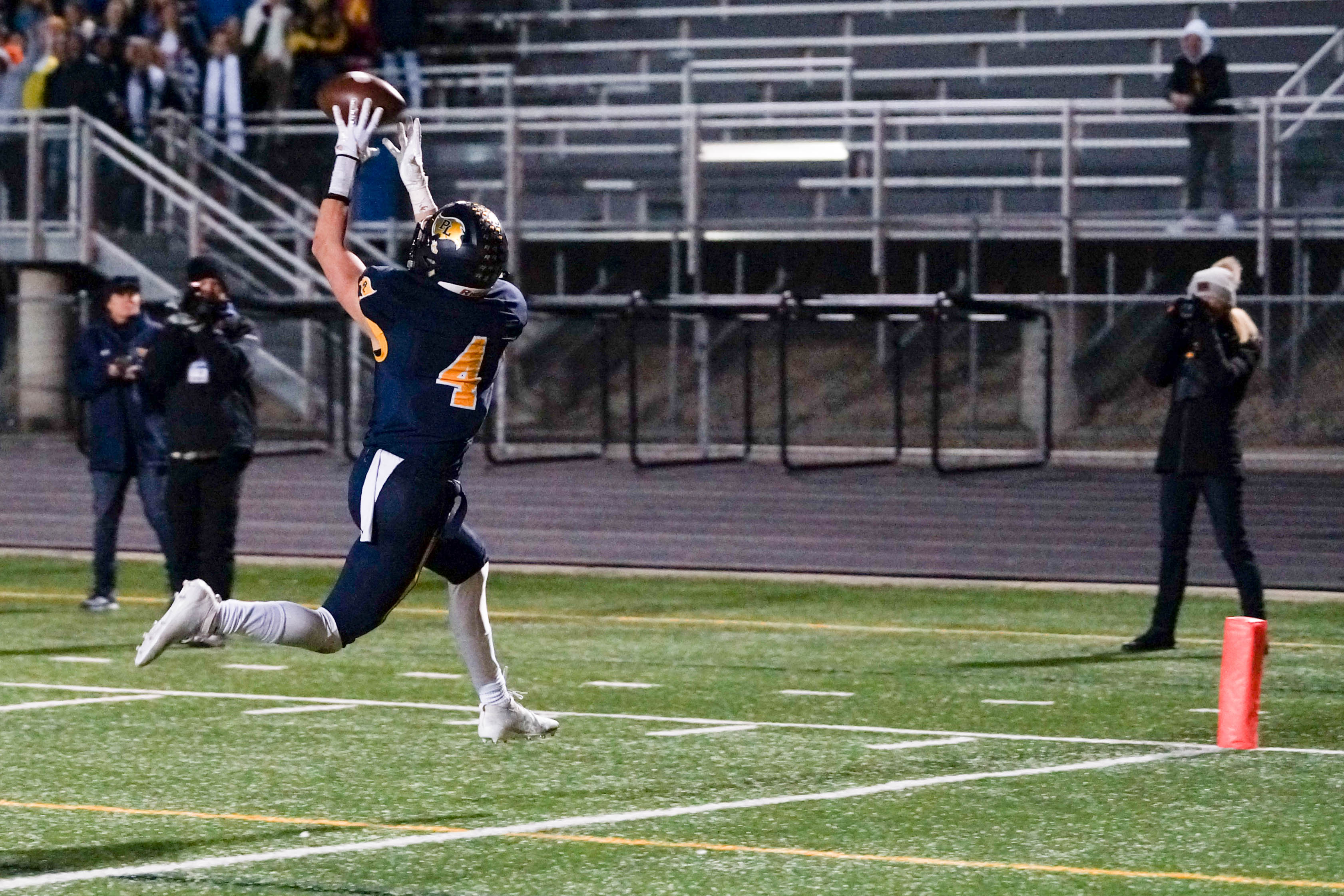 A wide open Austin Gordon hauls in what proved to be the game-winning touchdown in Prior Lake's 20-14 defeat of Cretin-Derham Hall on Friday in the first round of the Class 6A state tournament. Photo by Korey McDermott, SportsEngine

Sophomore quarterback Kyle Haas found Austin Gordon late in the fourth quarter for what became the game-winning touchdown in Prior Lake’s 20-14 win over Cretin-Derham Hall on Friday at Dan Patch Stadium in Prior Lake.

In response to the 16-yard pass from Haas, which gave the Lakers (5-4) a 20-7 lead, Raiders quarterback Preston Thelemann connected with Marisellieo Mendez to bring Cretin-Derham Hall within striking distance with 1:26 remaining. The Lakers, however, recovered the ensuing onside kick and hung on to win.

With the win, Prior Lake continues in the Class 6A state tournament with a trip to Champlin Park next week.

Haas completed three of five passes for 80 yards and one TD. Prior Lake senior running back Sam Emmerich ran for 31 yards and two touchdowns on 10 carries.