Everyone’s record is once again 0-0. But coaches whose teams are coming off losing records in the regular season are cognizant that other things besides winning can be gained by playing in what are often games with mismatched teams. 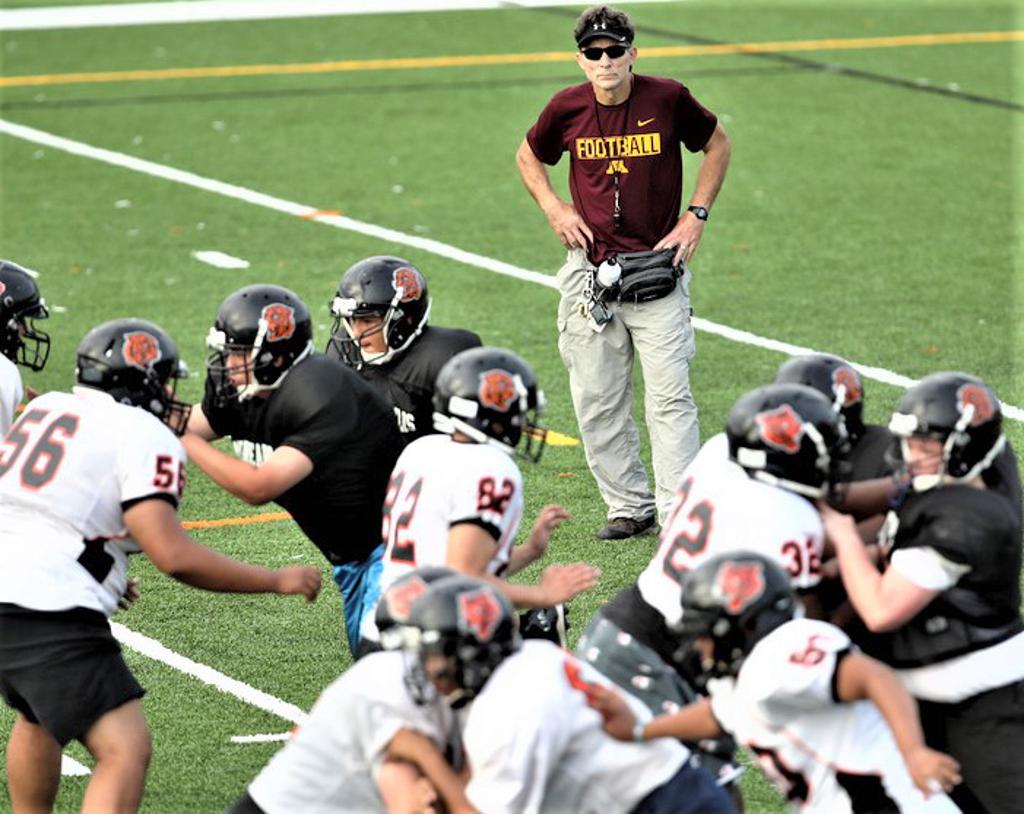 Minneapolis South coach Rodney Lossow said despite his team’s 1-7 record, “The way we always approach a game is with the desire to win. And let’s try some tom trickery, do some things that will add excitement to the game. Photo: Jeff Wheeler, Star Tribune

There’s no sugarcoating Tuesday evening, when the first round of high school football playoffs tends to serve up some of the least surprising games of the season.

Class 6A, featuring the state’s largest programs, has the night off. While the other six classes are in action, the best teams in many sections are either idle — having earned first-round byes — or paired against lower seeds, creating lopsided mismatches.

It’s a scenario that last year led some coaches to talk of limiting the postseason playoffs to just the top four seeds in each section and giving all other teams a single, end-of-the-season game against a comparable opponent from another section.

That idea has not gained much traction with the Minnesota Football Coaches Association (MFCA), which is proud of a system that gives every team in the state at least one shot at playoff glory. That doesn’t happen in most states.

Such a system is favored by teams with a chance to win a game or two. And it encourages hope for all.

But what do the teams on the short end think? How do they approach it, knowing they’re likely in for adefeat?

“We don’t talk about winning and losing,” said Tom Orth, head coach of winless Henry Sibley. “We try to focus on the process. The opportunity and the privilege to get one more chance to step on the field together.”

In his 21 years as head coach, Orth has seen the issue from both sides. He coached Sibley to the Class 5A state tournament in 2013. And he’s had years like this one, where his team has often been overwhelmed. The Warriors earned the bottom seed in the six-team Section 3 of Class 5A and will play Tuesday at No. 3 seeded Hastings.

They played the Raiders tough in the season-opener, losing just 16-7, and it’s a certainty that will be a part of the message to his team.

“It was a tight game. We can compete with them,” Orth said. “Everyone is 0-0. Let’s go out and fly around and have some fun.”

To Minneapolis South coach Rodney Lossow, whose 1-7 team will meet 7-1 Mound Westonka in the Class 4A, Section 5 quarterfinals Tuesday, there’s an unescapable reality to the situation despite his best efforts to put a positive spin on the situation.

“The way we always approach a game is with the desire to win,” he said. “And let’s try some tom trickery, do some things that will add excitement to the game. But I’m not an idiot. Something needs to be restructured. It’s not always easy to look at it and use a life comparison, How many times do you have to have your backs against the wall?”

In his first year at North St. Paul, Gene Teigland has committed himself to changing some prevailing attitudes. The Polars struggled to an 0-8 record, but Teigland said it was largely the result of shaking up a program that had become complacent. He’s not at all bothered about making his team swim upstream to experience success

“We’ve been teaching lessons this season,” he said. “We want them to know what it’s like dealing with high-stress situations? When something tough comes along in life — a job interview, a proposal — you need to know how to raise your level of focus, of preparation, of intensity.”

The Polars, the No. 6 seed in Section 4 of Class 5A, travel to play at Mahtomedi. They had their most successful game of the season the first time they played the Zephyrs, a 28-14 loss on Sept. 27. They haven’t scored a point since.

Teigland is excited by Tuesday’s possibilities, win or lose.

“I’m trying to sell hope through knowledge,” he said. “This is why we failed and this is what we’re going to have to do to be successful. We might not be good now, but that doesn’t mean we can’t be.”