Nick Hand, a junior defensive back for the Eagles, snatched away any chance at a Raiders' comeback on Wednesday. 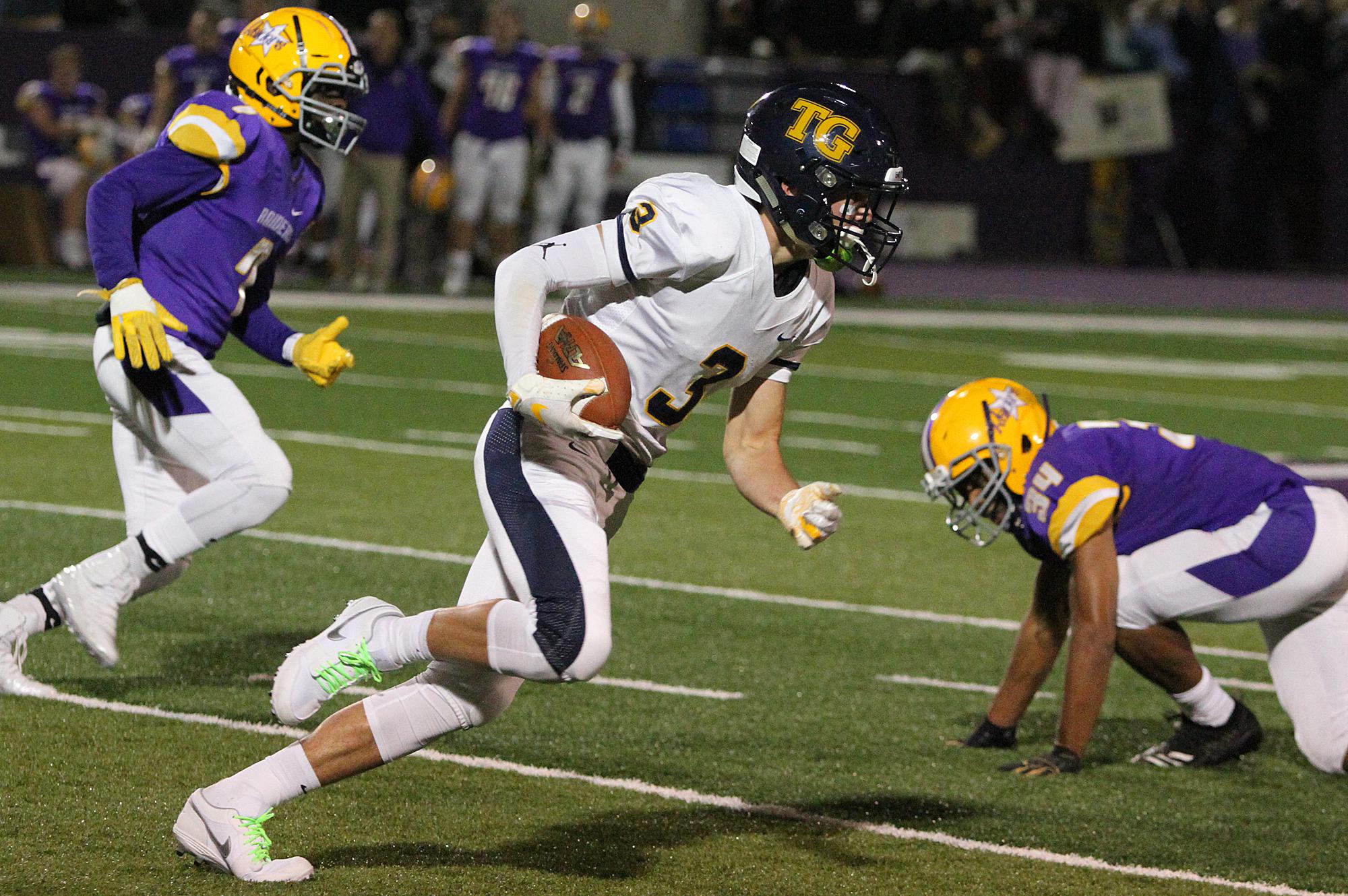 Nick Hand made up for not snagging an interception all season going into Totino-Grace’s regular season finale with Cretin-Derham Hall.

The Eagles junior defensive back picked off three passes in a 26-20 win over the Raiders (4-4, 3-3) Wednesday at the University of St. Thomas. Hand’s picks included a 60-yard interception return in the third quarter.

“It was just our defense,” Hand said. “Great calls. Our coaches just put me in that position.”

His 60-yard return didn’t slam the door on the Raiders though. Raiders senior defensive lineman Jackson Peters recovered a fumble on the following drive after a sack by senior defensive end Joseph Akoh. 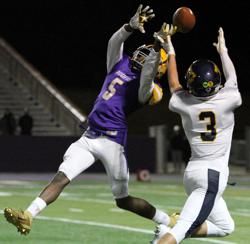 “I think our defense play a phenomenal game,” Raiders senior running back Zion Guerra said. “We let them score down the stretch, but I have trust our defense for the playoffs that we can get stops against good teams.”

Guerra played on defense, too, recovering a fumble in a turnover-heavy game. He also chipped in on the ground game with an 11-yard run.

Raiders senior running back Tony Underwood did most of the damage on the ground with 163 yards rushing on 30 carries. The Raiders struck through the air for scoring, however, as senior quarterback Preston Thelemann threw two touchdown passes.

His 44-yard TD pass to senior wide receiver Chris Walsh gave the Raiders their only lead of the night, 7-6, in the first quarter. Totino-Grace, ranked No. 7 in the Class 6A Associate Press poll, jumped back ahead 12-7 with some trickery at the end of the first half.

Eagles (6-2, 5-1) senior punter Wolfe Glaeser hit senior linebacker Andrew Christopherson for a 51-yard TD pass. The Eagles extended the lead to 18-7 in the third quarter on their opening drive, capped by a 3-yard TD run from junior running back Patrick Doran.

Cretin-Derham Hall chipped away with a couple field goals by senior kicker Jimmy Reardon in the second half. The Raiders had a chance to take the lead in the fourth quarter, down 18-13, but Hand picked off the Raiders a third time.

Totino-Grace took command afterward with a 48-yard TD run by sophomore running back Hunter Karlson. The Eagles led 26-13 with 2:51 left in the game.

“I love what my team did. They provided for me so that I could provide for them,” Karlson said about his blockers.

Karlson added that they worked on finishing blocks during the short week of practice. The Eagles also blocked out two years of losing seasons to give themselves a shot at a top seed in the Class 6A playoffs.

“We were the eight seed last year, so from worst to first. It’s a great feeling,” Hand said.

Cretin-Derham Hall hopes to get back on track after losing its fourth-straight game. Guerra isn’t worried.

“We’re trying to stay together,” Guerra said. “We’re keeping our heads up for sections.” 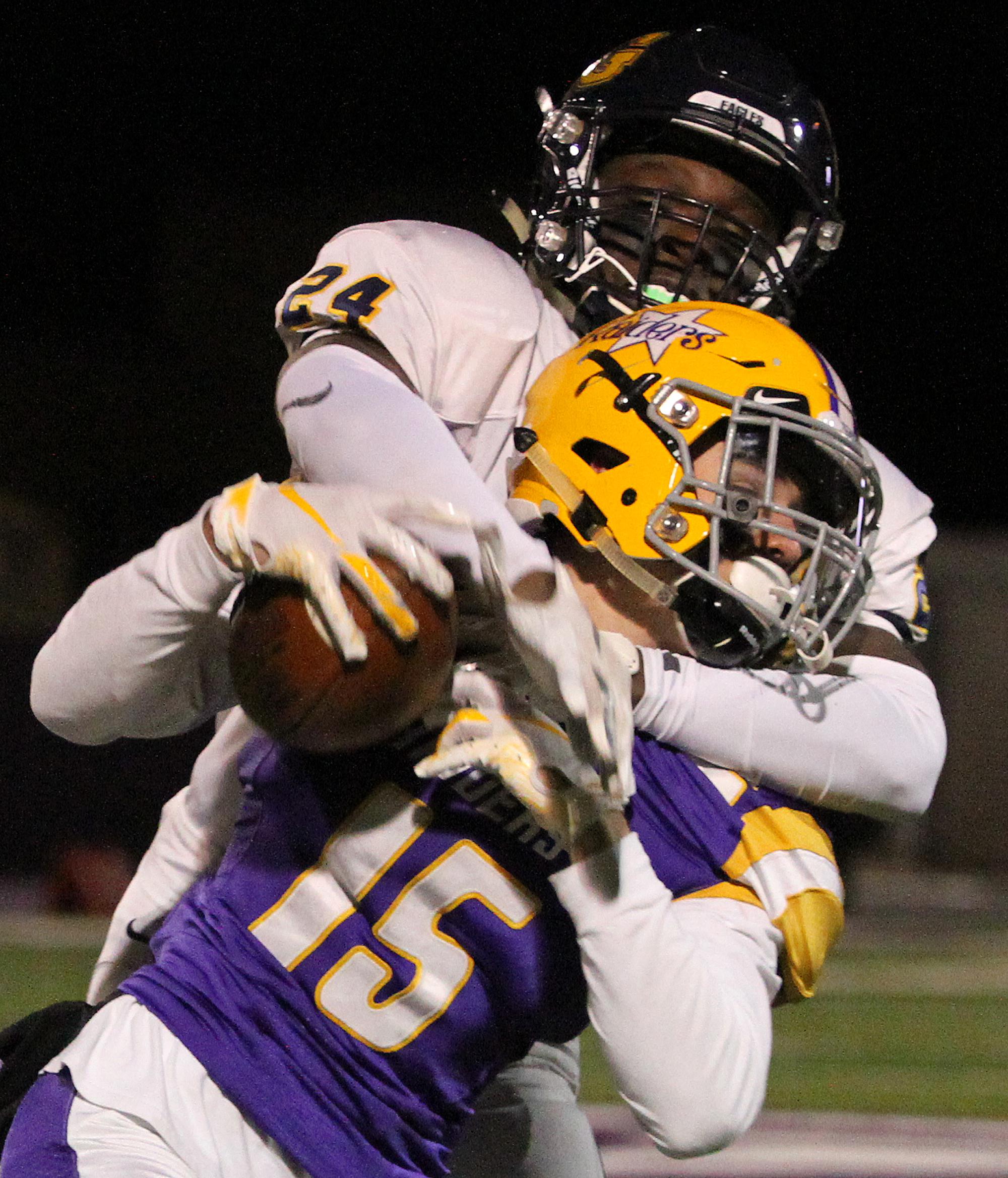 Cretin-Derham Hall receiver Tyson Schilling is hit by Totino-Grace cornerback Deezwin Cooper in the first quarter at the University of St. Thomas on Wednesday night. Photo by Drew Herron, SportsEngine

Junior defensive back Nick Hand picked off three passes for Totino-Grace in a 26-20 win over Cretin-Derham Hall Wednesday at the University of St. Thomas.

Hand garnered two of his interceptions in the second half, preventing a Raiders' rally in their home finale. The Eagles, ranked No. 7 in the Class 6A Associate Press poll, came out throwing as junior quarterback Kristoff Kowalkowski found senior wide receiver Isaac Richards deep on a 49-yard connection that set up junior running back Luke Delzer to punch in a 1-yard touchdown run for a 6-0 lead.

Cretin-Derham Hall (4-4, 3-3) had its lone lead, 7-6, following a 44-yard TD pass from senior quarterback Preston Thelemann to senior wide receiver Chris Walsh. Totino-Grace (6-2, 5-1) jumped back ahead at the end of the first half on a 51-yard fake punt pass for a TD from senior punter Wolfe Glaeser to senior linebacker Andrew Christopherson.

The Eagles extended the lead to 18-7 in the third quarter on their opening drive, capped by a 3-yard TD run from junior running back Patrick Doran. Cretin-Derham Hall chipped away with a couple field goals by senior kicker Jimmy Reardon in the second half.

After Hand’s third interception of the game in the fourth quarter, the Eagles looked in control with a 48-yard TD run by sophomore running back Hunter Karlson. The Eagles led 26-13 with 2:51 left in the game.

Theleman got the Raiders back into it with a 22-yard TD pass to Will Burke, but his team couldn’t get the ball back again. The Raiders suffered their fourth-straight loss.