The verbally committed Gopher ran back the opening kickoff for one score and caught three touchdown passes in a 48-21 victory. 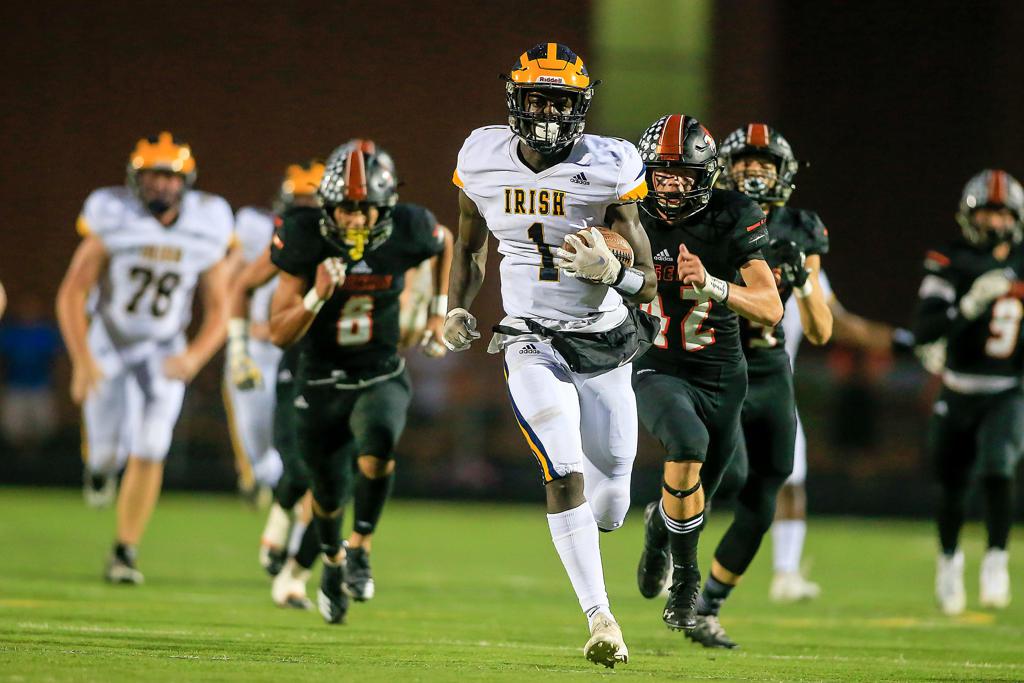 Rosemount receiver Jonathan Mann (1) grabbed a short pass over the middle and ran 50-plus yards for a touchdown on the second play of the second quarter. Photo by Mark Hvidsten, SportsEngine

After Friday’s game, an assistant coach handed Rosemount receiver Jonathan Mann a gold cross on a chain, a gift from Mann’s parents that he’s not allowed to wear during games. A present, he said, he “likes to get back as soon as I can.”

Mann took the same attitude toward Farmington’s opening kickoff, which he took back 85 yards for a touchdown to kick-start a memorable performance in a 48-21 Irish victory.

Four touchdowns covering a total of 219 yards from Mann, who has verbally committed to the Gophers, helped Rosemount (2-2) get ahead and stay ahead of the host Tigers.

Football observers have raved about Mann’s potential as a 6-4, 200-pound playmaker since his arrival as a coveted recruit two seasons ago. But not until Friday did Mann enjoy a signature performance.

“It’s rewarding, I guess,” said Mann, an all-state performer in track and field. “It’s fun. But I’m not worried about how many touchdowns I score. It’s how many the team scores. If the team is still winning, that’s what is important.”

Irish quarterback Trevor Armborst finished with four touchdown passes, including three to Mann of 55, 57 and 22 yards. Two of those touchdowns came on well-delivered slant patterns. Fellow receiver Jake Ratzlaff, who has verbally committed to play hockey for the Gophers, turned a similar play into a 37-yard score and a 35-0 Irish advantage.

But No. 7 Farmington (3-1) didn’t quit. Quarterback Alex Berreth and receiver Isaac Ask connected for touchdowns of 23, 4 and 8 yards, the first coming before halftime and the second to open the third quarter.

Tigers coach Adam Fischer said he “kind of challenged” Berreth at halftime “and he came out and he was all over the place making plays with his legs.”

Not as many as Mann.

“Jonathan’s pretty good and he had a night,” Irish coach Jeff Erdmann said. 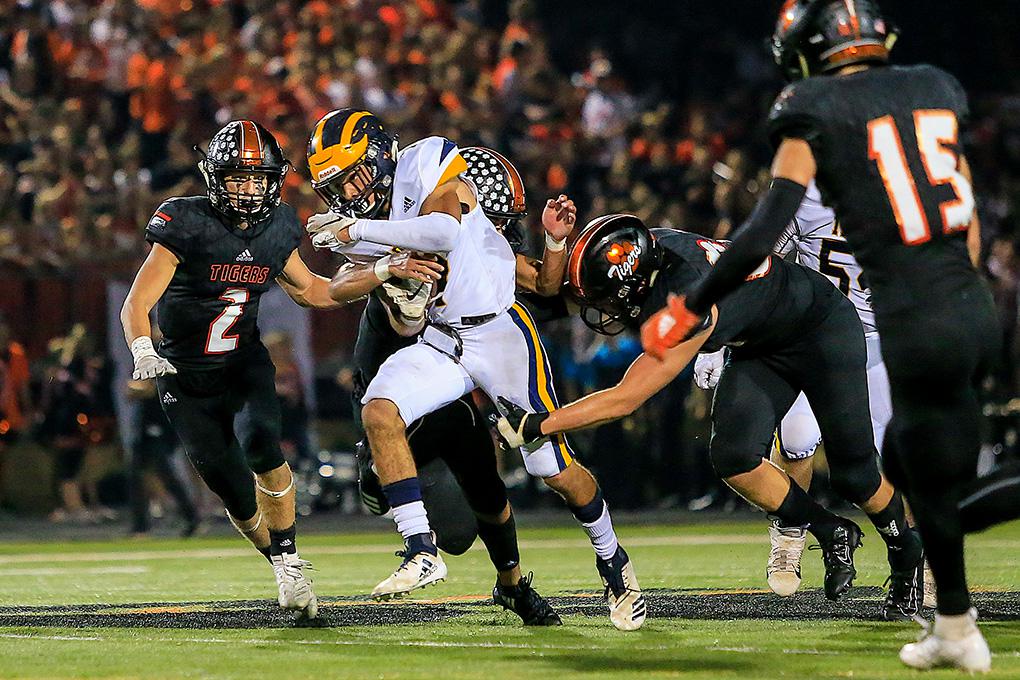 Rosemount running back Christian Graske bulled his way through the Farmington defense as the Irish ran down the clock early in the fourth quarter. Photo by Mark Hvidsten, SportsEngine

From returning the game’s opening kickoff for a touchdown to a pair of long catch-and-runs for scores in each half, Rosemount’s Jonathan Mann was, well, the man.

Four touchdowns from Mann, who has verbally committed to the Gophers, helped the Irish get ahead and stay ahead of host Farmington in a 48-21 victory on Friday.

Mann returned Farmington’s opening kickoff 85 yards for a touchdown, the start of Rosemount’s first half onslaught.

The Irish ended their ensuing three offensive possessions with touchdowns. And the defense chipped in a touchdown for a 35-0 lead.

No. 7 Farmington (3-1) didn’t quit. Quarterback Alex Berreth and receiver Isaac Ask connected for three touchdowns. But the Tigers’ homecoming, and their bid to start 4-0 for the first time since 2013, went awry.

Berreth and Ask combined for a touchdown on Farmington’s first possession of the third quarter. But Mann responded with a 57-yard touchdown catch for a 41-14 lead. He added a 22-yard touchdown in the fourth quarter. Irish quarterback Trevor Armborst finished with four touchdown passes.

Rosemount (2-2) didn’t impress with its record. But all three of Rosemount’s previous opponents were ranked among the Associated Press top 10 entering Friday.

Farmington’s previous three opponents were a combined 2-7 after three weeks. 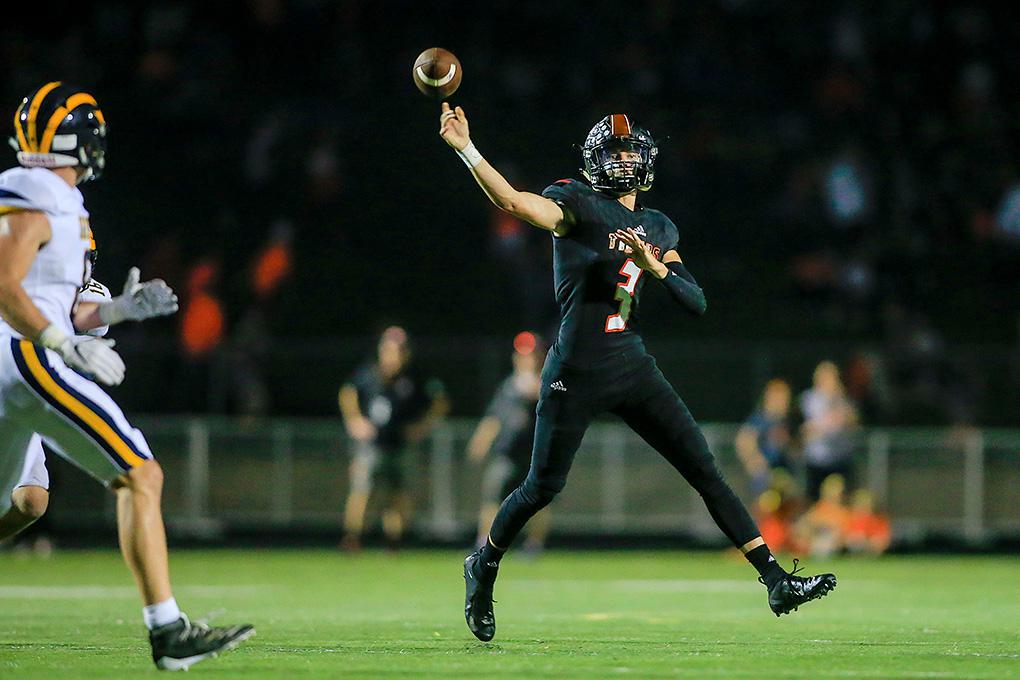 Farmington quarterback Alex Berreth (3) threw a touchdown pass late in the second quarter to pull the Tigers within 35-7 against Rosemount. Photo by Mark Hvidsten, SportsEngine