Despite injuries to two key players, the Titans held off the Raiders, who put up 10 fourth-quarter points. 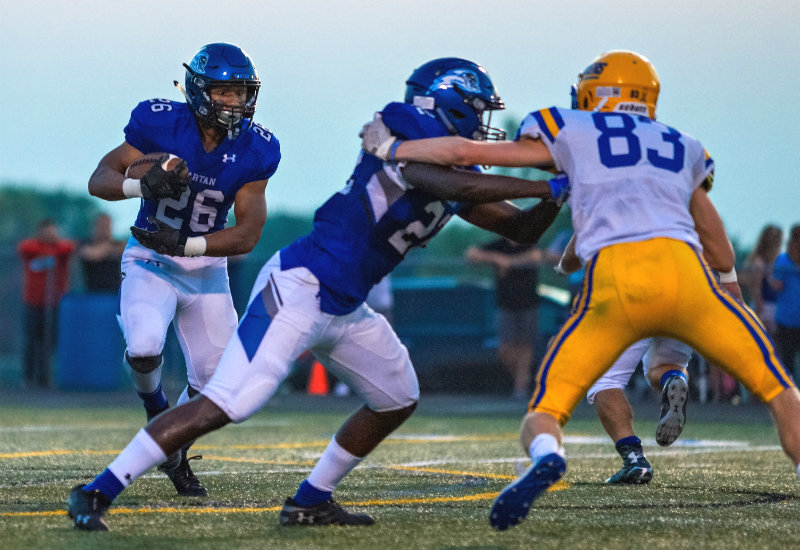 Tartan running back Tien Dang (26) looks for a lane to run through during Friday's 24-17 victory at home over Hastings. Photo by Korey McDermott, SportsEngine 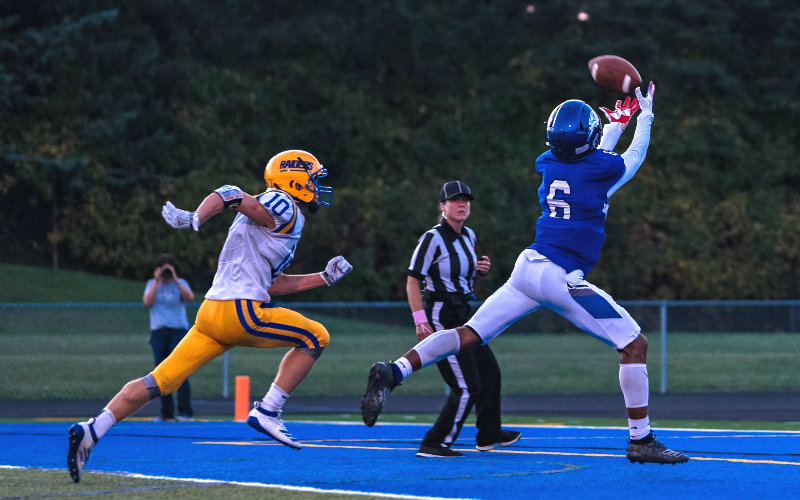 Titans wideout Dorian Singer (6) with his second touchdown in the first quarter. Signer left the game in the second quarter with a leg injury and did not return. Photo by Korey McDermott, SportsEngine

An explosive offense carried Tartan through its first three games. And through the first five minutes Friday against Hastings, it looked like that’s the way things would play out again.

A couple of big injuries later, and the Titans had to learn to gut out a win on the fly — which they did, holding on for a 24-17 victory over the visiting Raiders.

“I think our team toughness is high,” running back Tien Dang said. “This game, we played together as a family. That’s what drove us through the game.” 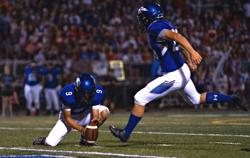 Junior wide receiver Dorian Singer came into the game with six offensive touchdowns, leading a Tartan offense that scored 106 points in its last two games. And after recovering a fumble on the first play from scrimmage in the game, Singer caught a 16-yard touchdown pass on the next play. The next two passes quarterback Brandon Lockhart threw to Singer were a 23-yard TD reception and a 50-yard reception.

Then, early in the second quarter on a Hastings' 65-yard TD, Singer went down with a lower leg injury and was out for the rest of the game. So the Titans leaned on Dang, their workhorse running back.

Or at least, they did until he got hurt, too, tweaking his knee on a run in the second quarter.

The Titans (4-0, 2-0) went into halftime leading 17-7, but potentially missing their two biggest playmakers.

But the toughness Dang talked about wasn’t just talk. He took his first carry of the second half 80 yards for a touchdown, bouncing off some Raiders and breaking tackles until he got to the right sideline and outran everyone for a 24-7 Titan lead.

“He’s one of our faster guys, obviously,” Tartan coach Matt Diediker said. "On that one that he broke, he didn’t run in a straight line and beat everybody with speed, he ran over a couple guys. And that’s after having a pretty serious knee scare.”

When the Titans have Singer and Dang healthy and rolling, their offense is versatile and explosive.

With Singer sidelined and Dang less than 100 percent, the offense found a way to grind out yardage and run down the clock. And when a late fumble gave the Raiders the ball near midfield, the defense stepped up and held the line, with Deshawn Carter getting a pair of big pass breakups shadowing Hastings’ top receiver, Jackson Kirchoff.

“I think Hastings responded well,” Diediker said. “It’s a good teaching tool that we’re gonna use tomorrow and the rest of the way, because there’s no easy games on our schedule.”

The Titans went to state last year, but had to replace a lot of key contributors on both sides of the ball this fall. Getting through injuries against a tough Hastings (2-2, 2-0) team, which had won the previous five regular-season meetings between the two, showed the program’s recent success is sustainable.

Even with the tweak, Dang finished with 151 rushing yards, and now has eight rushing TDs on the year.

“It’s the passion for the game,” Dang said. “This is my family right here. That’s what drove me.”

Diediker said Singer’s injury isn’t believed to be serious and expects him back for next week. The Titans proved they can tough out a loss like that and have guys step up, and the team might be better for it down the line.

Of course, they’ll happily take their explosive junior receiver back as soon as he’s able.

“With him, he can make any play on the field,” Lockhart said. “Him going down, yes, that was a big oof, but we battled through it, and we had to grind on the run.” 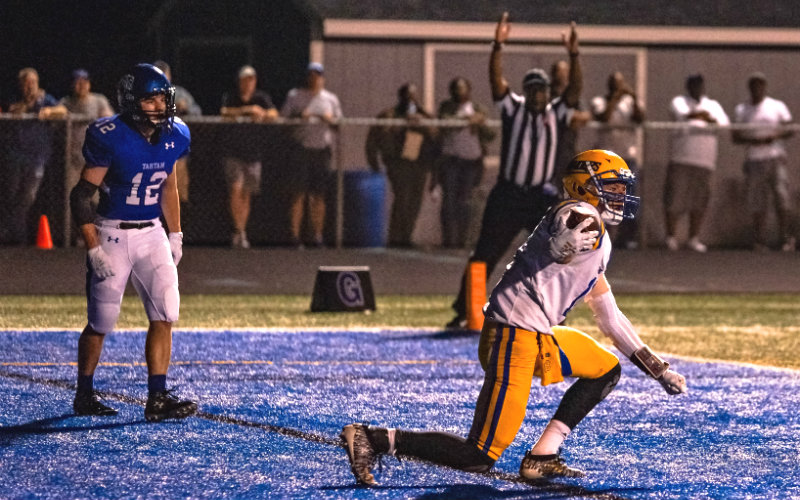 Hastings wide receiver Jackson Kirchoff with a touchdown catch late in the fourth quarter against Tartan. The Raiders lost to the Titans 24-17. Photo by Korey McDermott, SportsEngine

Tartan’s fast start on both sides of the ball paid off for the Titans on Friday as they defeated Hastings 24-17 at Tartan High School.

The Titans, ranked No. 7 in the Class 5A Associated Press statewide poll, went up 14-0 in the first quarter, then survived their two biggest offensive playmakers getting injured. The Titans (4-0, 2-0) led by 17 early in the third quarter, and withstood a late surge from the Raiders.

Down 10 points entering the second half, the Raiders (2-2, 2-0) got a 5-yard touchdown pass to Jackson Kirchoff in the fourth quarter, and a field goal from Christian Brenny to get Hastings within 24-17 with 6 minutes, 53 seconds to play. The Titans defense held on the rest of the way.

Tartan’s Dorian Singer made an early impact before departing with a leg injury. He recovered a fumble on the first play from scrimmage, and then scored a 16-yard touchdown the next snap. He added another 23-yard TD catch and a 50-yard catch before getting hurt on a collision early in the second quarter.

The Raiders scored on a 65-yard pass from Dylan Wagner to Joe Nauer to get within 14-7 in the second quarter. Garret Kierzek hit a 41-yard field goal to put Tartan up 17-7, a lead the Titans carried into halftime.

Tartan’s Tien Dang had an 80-yard touchdown run to open the second half and finished with 151 rushing yards.