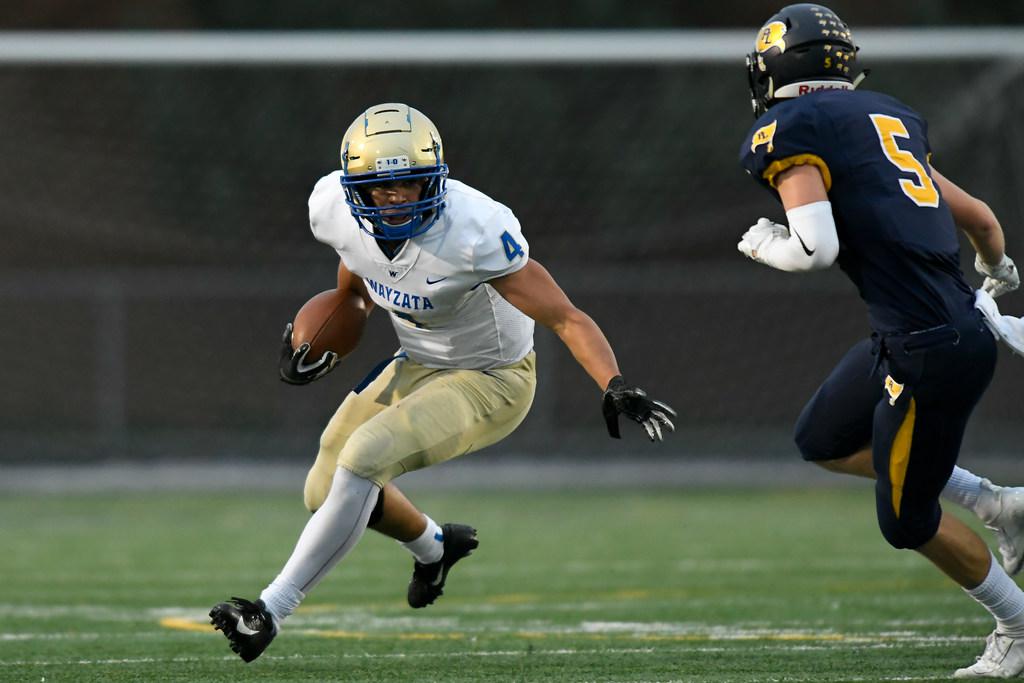 Wayzata running back Christian Vasser (4) ran the ball for a first down against Prior Lake defensive back Nick Larson (5) in the first half. Photo: Aaron Lavinsky • aaron.lavinsky@startribune.com

“Thunder and Thunder?” Vasser said with a laugh. “Something like that. All of us run with a purpose.”

The duo helped the Trojans earn a 14-10 comeback victory at Prior Lake on Friday. No. 4 Wayzata, starting 3-0 for the first time in four seasons, edged the fifth-ranked Lakers thanks to a 95-yard fourth quarter drive capped by Vasser’s second short touchdown run of the game.

Vasser, listed as 6-1, 205 pounds, ran 31 times for an unofficial 142 yards. Jackson, listed at 6-2, 210 pounds, gave the Trojans another strong option. He also played nose tackle, getting into the center’s business quicker than a hiccup.

“Malaki is a different breed,” Vasser said. “He’s a beast.” 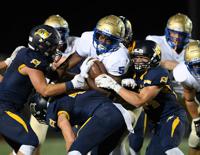 Photo gallery: Wayzata vs. Prior Lake

“Christian had some juice and was feeling like he was ready to go,” Brown said. “So we said, ‘Let’s go with him.’”

Vasser’s first score produced a 7-0 Wayzata lead. Prior Lake answered, first with a field goal and later with a touchdown made possible but a fumbled Trojans’ punt return. Tyler Shaver’s 1-yard run gave the Lakers a 10-7 advantage in the third quarter, and the home team seemed poised to start a season 3-0 for the first time in more than a decade.

Playing from behind for the first time this season, Wayzata embarked on a drive from its 5-yard line early in the fourth quarter. A penalty wiped out a long pass into Prior Lake territory. So the Trojans did it the hard way – on the ground.

“We knew it was going to be hard but we trained ourselves to be disciplined and fight through adversity,” Vasser said. “It doesn’t matter if we lose five yards. Next play, we’ll gain five or 10 yards.”

Vasser scored from 2 yards out with 3:22 left. Prior Lake took over and mounted a strong drive.

“We talked to the team coming in about this game coming down to which team finds a way to win and also, which team doesn’t do things to lose the game,” Brown said. “Turnovers and penalties were going to be a big deal.”

A chop block penalty on the Lakers (2-1), which came on the heels of a pass interference penalty against his team on the previous Wayzata scoring drive, was too much for Prior Lake coach Matt Gegenheimer to stomach.

He told the officials as much and drew an unsportsmanlike conduct penalty. Instead of having the ball in Wayzata territory, Prior Lake faced second-and-41 from its 20-yard line. A few plays later Wazata’s Cole Brown intercepted a pass to seal the outcome.

“I’d like to have the kids decide the game in the end,” Gegenheimer said.

A fourth-quarter touchdown drive gave Wayzata a 14-10 victory at Prior Lake on Friday.

On its ensuing drive, No. 5 Prior Lake (2-1) crossed midfield until a rash of penalties hurled the Lakers backward.

A chop block followed by an unsportsmanlike conduct penalty on a Prior Lake coach proved too much to overcome. A Wayzata interception sealed the victory.