With the Mustangs trailing in the fourth quarter, Cole Stenstrom turned potential disaster into points to give his team lead for good. 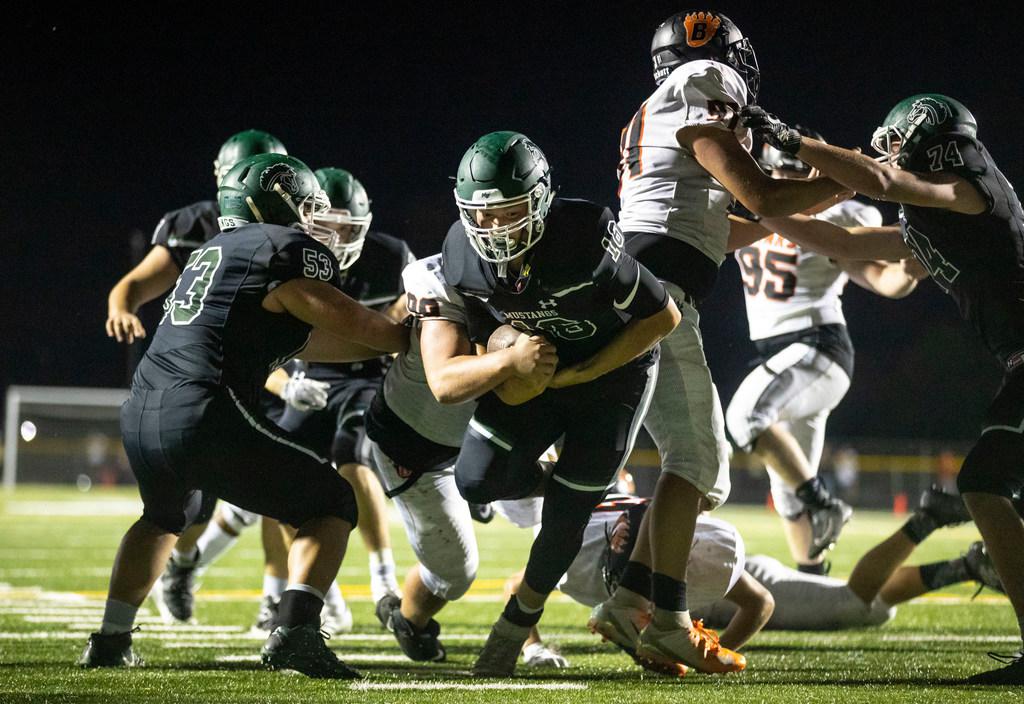 Mounds View quarterback Cole Stenstrom (16) rushed for the go-ahead touchdown in the second half of the game on Friday. Photo: ALEX KORMANN • alex.kormann@startribune.com

For Cole Stenstrom, all those hours in the weight room — the squats and deadlifts and sweat and self-talk — paid off on one crucial play in Mounds View’s 17-7 victory over White Bear Lake.

Trailing 7-3 early in the fourth quarter, the Mustangs had largely put their mistake-prone first-half performance behind them and had driven to the White Bear Lake 4-yard line. But the mistake bug bit again, this time a fumbled snap from center.

The ball rolled loose for 5 yards before Stenstrom, a third-year starter for Mounds View, picked it up. He weaved through a throng of players from both teams, getting to the 2-yard line before it appeared he would be stopped.

Nope. Stenstrom drove through two Bears defenders and into the end zone for a touchdown. It put Mounds View ahead 10-7, a lead it never lost.

“I was just trying to make a play from a mishap,” Stenstrom said. “It comes down to how much time we’ve put into the weight room. It’s all that squatting and cleaning.”

For the first two quarters, neither team did much of anything right. Drives were largely non-existen because of mistakes and penalties. With the score 0-0, halftime seemed merciful.

“Seriously, that first half, if we caught the snap, we didn’t line up right. If we got the handoff, we jumped,” White Bear Lake coach Ryan Bartlett said. “It was ridiculous. We had a chance to make the score 14-0, 10-0 in that half and we didn’t.”

Mounds View coach Aaron Moberg said the key for his team was its ability to put the ugliness behind them.

“We played as poorly in the first half as we can play, but we got together, collected ourselves and talked about what we can do moving forward,” he said. “We came out after halftime and had a different level of intensity in all three facets of the game.”

Mounds View started the second half with its best drive of the game to that point. Stenstrom, who was just 1-for-8 with an interception before halftime, started to find his receivers. He hit receiver Collin Hoyhtya for gains of 22 and 21 yards as the Mustangs reached the White Bear Lake 15 before stalling. Sophomore Ben Samuel’s 33-yard field goal gave Mounds View a 3-0 lead.

Mounds View took the lead for good on its next drive, which went 77 yards. It included a fourth-and-five conversion on a throw from Stenstrom to Hoyhtya, setting up Stenstom’s drive-saving touchdown.

“Football usually comes down to four or five plays,” Moberg said. “It’s all about who steps up and makes plays when the bell rings and our guys did that tonight.”

Cole Stenstrom’s night had been inconsistent at best, but the senior quarterback made the biggest play of the game when he had to in Mounds View’s 17-7 victory over White Bear Lake.

After a scoreless first half at Mounds View in which the busiest group on the field was the officials, both teams looked much more polished after halftime.

Mounds View broke the scoreless tie with a 33-yard field goal by Ben Samuel early in the third quarter.

Stenstrom connected with Jack Roeber for a 34-yard touchdown with 3:07 left in the fourth quarter for the final margin of victory.