Prior Lake holds off late surge from rival Shakopee

The Lakers nearly blew a 14-0 lead in the fourth quarter but held on to top the Sabers. 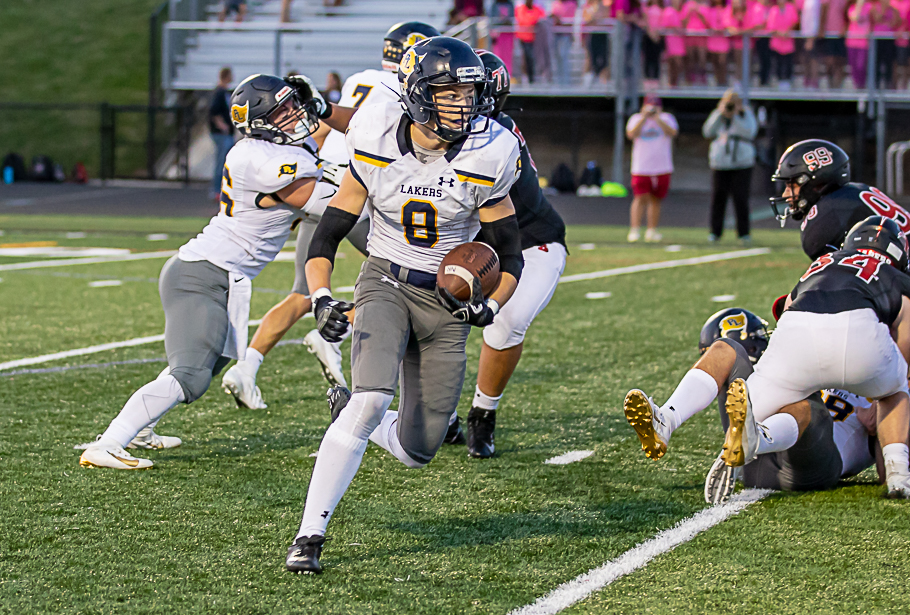 Prior Lake junior running back Tyler Shaver, who had 104 yards on 21 carries, goes up the field against Shakopee at Vaughan Field in Shakopee. The Lakers beat the Sabers 14-12 on Friday Night. Photo by Gary Mukai, SportsEngine

As Prior Lake and Shakopee went to their respective locker rooms at halftime during Friday night’s game at Vaughan Field in Shakopee, the silence of the home crowd was deafening. The Sabers trailed 14-0 and had little success moving the ball against the Laker crowd.

Little did those fans, and everyone else in attendance, know the game would become a nail-biter that would go right down to the end.

In the fourth quarter Shakopee battled back, having the chance to tie the game and win it. The Sabers’ rally came up just short, however, as they suffered their first loss of the season and Prior Lake escaped with a 14-12 win.

From the start, the Lakers had their foot on the gas pedal and ran wild against Shakopee. Prior Lake, ranked No. 6 in the Class 6A Associated Press poll, struck in the first quarter after driving most of the field, culminating in Lakers senior quarterback Nate Raddatz throwing a 4-yard touchdown pass to open the scoring. 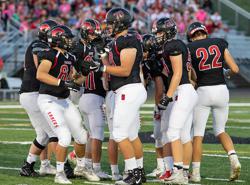 Photo Gallery: Prior Lake vs. Shakopee

Aside from Raddatz’s early TD pass, Prior Lake’s attack struck on the ground. Junior running back Tyler Shaver scored the second Lakers touchdown to make it 14-0. Shaver, who was relentless on the ground, amassed more than 100 yards on 21 carries.

“We could tell he had the hot hand,” Lakers coach Matt Gegenheimer said. “Four or five times in the first half he looked like he was a tackle away from breaking off a big run.”

Shaver is just one back in a committee of skilled runners. Three different tailbacks scored in Prior Lake’s 28-13 season-opening win over Lakeville South on Aug. 29 and seven different players carried the ball in the Lakers’ win Friday.

“For a lot of teams, you can point at one guy and say he’s the guy you need to watch,” Shakopee coach Ray Betton said. “They have so many. They’re fast, they’re physical and they’re disciplined.”

For Shakopee (1-1, 0-1), offense was hardly existent in the first half following a 42-0 romp over Eagan in its season opener last week.

“I told the guys we needed to show some pride and start to respond,” Betton said of his halftime message. “It was the first home game, big crowd. We eventually settled down and started to play.”

And settle down they did, starting with the Sabers defense which kept Prior Lake (2-0, 1-0) off the scoreboard in the second half. The Sabers also made some key plays, getting a fumble recovery and blocking a field goal attempt.

Eventually, the Shakopee offense found its way and scored a pair of touchdowns — but the point-after attempts went awry each time and the failed conversions ended up being the difference.

“I like how our guys responded,” Gegenheimer said. “We try to make our practices chaotic for these type of situations.”

Both coaches pointed to Friday’s contest as a step in the right direction as each team prepares to compete with other squads in a stacked Metro South Subdivision, which features No. 2-6A Lakeville North and No. 5-6A Lakeville South.

“We needed a game like this,” Betton said. “You go from this to more tough teams. We have to put it all together now. Tonight was a step in the right direction.” 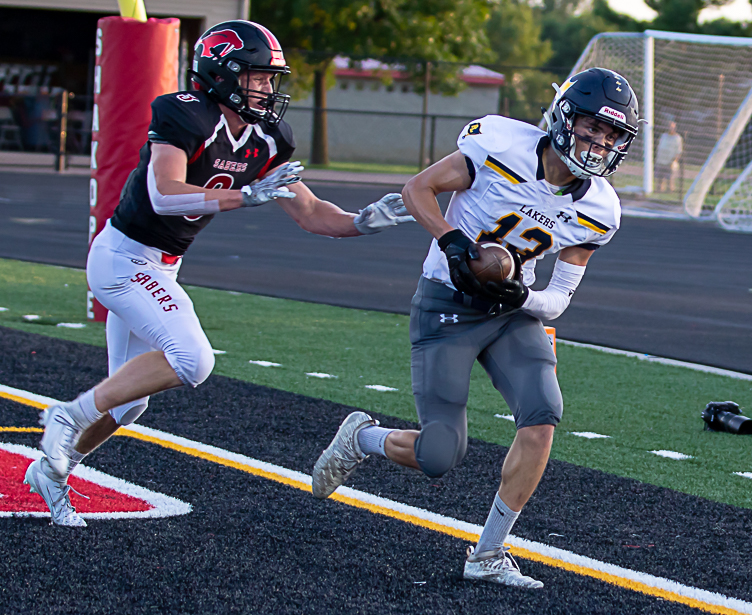 Prior Lake junior wide receiver Jake Anderson puts the Lakers up 6-0 against host Shakopee on Friday Night. The Lakers went out to defeat the Sabers 14-12. Photo by Gary Mukai, SportsEngine

Prior Lake built a 14-0 lead in the first half against Shakopee on Friday, which proved to be just enough as the Sabers rallied for two touchdowns in the fourth quarter but could not convert either point-after attempt, falling to the Lakers 14-12 at Vaughan Field in Shakopee.

In the first half the Lakers, ranked No. 6 in the Class 6A Associated Press poll, took complete control scoring both of their touchdowns in the opening 24 minutes.

Senior quarterback Nate Raddatz got things going for the Lakers (2-0, 1-0) in the first quarter with a 4-yard pass on fourth down to give Prior Lake a 7-0 lead. The Lakers’ offensive attack was supplemented by junior running back Tyler Shaver, who notched the game-winning touchdown with a run from 3 yards out. Shaver finished with 104 yards on 21 carries.

Shakopee (1-1, 0-1) stayed in the game with a staunch defensive effort, featuring junior Ashton Schriever who had an interception. Offensively, he caught the second Shakopee touchdown with 3:31 remaining in the game.

The Sabers tallied both of their touchdowns in the fourth quarter, but they missed the first extra-point opportunity and failed on a two-point conversion try following their second TD. 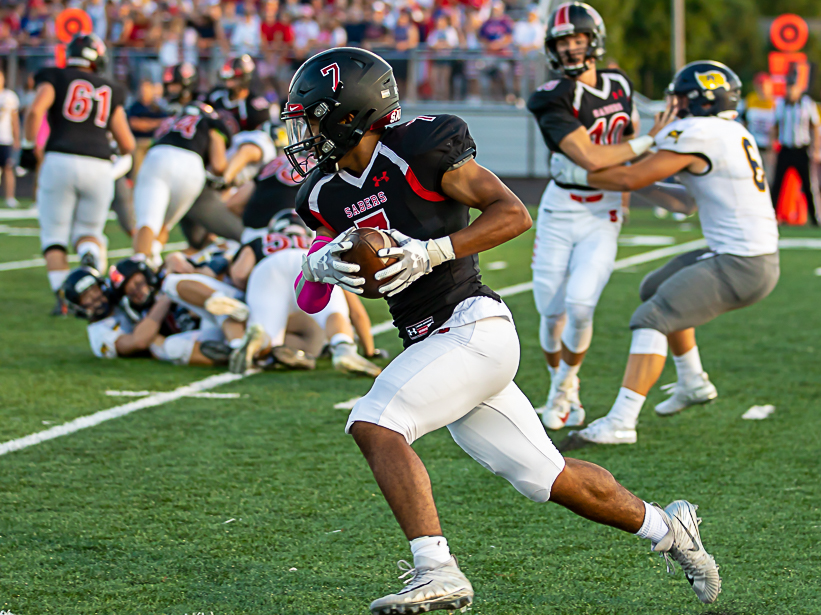