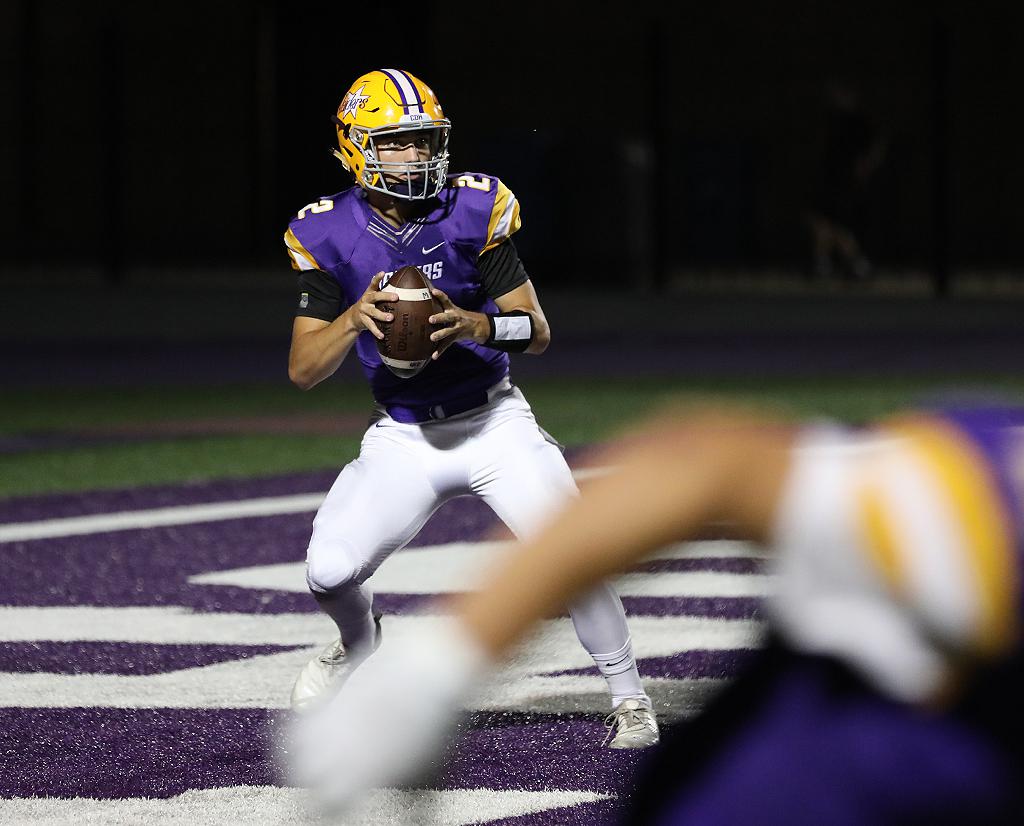 Cretin-Derham Hall quarterback Preston Thelemann drops back in to the end zone, looking for an open receiver. Thelemann finished with 290 passing yards, leading the Raiders to a 24-14 win over the Raptors. Photo by Cheryl A. Myers, SportsEngine

The starting quarterback battle at Cretin-Derham Hall continued into the second game of the season. While it may not be completely over, Preston Thelemann looked in control against rival East Ridge, helping keep the Raiders undefeated another week.

Thelemann and Mike Walsh have split reps under center for the Raiders (2-0, 1-0) all offseason and fall, and did so through the first quarter of a 24-14 win over East Ridge at the University of St. Thomas in St. Paul on Friday night. But once Thelemann got rolling, he kept going, leading three touchdown drives and a final game-clinching field goal drive.

“I always believed in myself and felt like I was the guy,” Thelemann said. “Tonight was just proving it, and I couldn’t have done it without my teammates.”

The senior finished the game 21 of 26 for 290 yards with two touchdowns. In the second quarter, he threw a deep ball down the left seam to Tyson Schilling for a 53-yard TD, giving the Raiders, ranked No. 7 in the Class 6A Associated Press statewide poll, a 14-0 lead. And on the first play of the fourth quarter, Thelemann hit Marisellio Mendez down the right sideline in stride for a 51-yard touchdown to break a 14-14 tie.

Walsh played one series in the first quarter before Thelemann got another crack at leading the offense. He finished with a performance that showed a lot of potential. 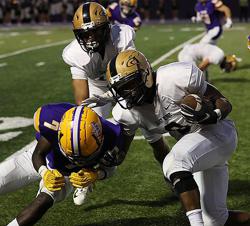 “He was just playing well,” said first-year Raiders coach Chuck Miesbauer of Thelemann. “Him and Mike Walsh have been battling all spring, all summer, all fall. They’ve been going back and forth. Sometimes a guy’s got things rolling, and Preston came out and kind of found a rhythm a little bit. We rode the hot hand.”

Miesbauer said some successes in the run game helped open things up for the passing game. Even then, it was a bit of a slow start for Thelemann, who turned down a couple early opportunities to take deep shots in favor of check-down passes. He also missed a few deep throws.

But Thelemann impressed with his ball distribution. He completed passes to nine different receivers, and no one had more than six catches. Six players had multiple receptions.

“He spreads the ball real well,” tight end Will Burke said. “At practice we work hard with all our receivers, so everyone’s ready and prepared to play in the game.”

Thelemann added: “I believe in all my guys. We have talent all across the board, very versatile.”

Thelemann also made some play his legs Friday, picking up a couple first downs on runs. The biggest run came after an East Ridge fumble was recovered at the Raiders’ 1-yard line. On the ensuing play, Thelemann found the sideline for a 37-yard scamper to key a drive that ended with a field goal to seal the win.

Cretin-Derham Hall, which showed flashes of versatility against the Raptors (0-2, 0-1), seems to have plenty of playmakers, and now it looks like they might have found the guy to get the ball to them. Miesbauer said he liked how Thelemann read the defense and dispersed the ball to the right player, which played into his team’s offensive strengths as seven different Raiders had catches in the fourth quarter alone.

“We’ve got a lot of guys that can catch the ball and make plays,” Miesbauer said. “That’s a big thing for us, is the more we are able to spread the football around, the less defenses are able to key in on a certain individual, and the more opportunity it creates when we want to take a shot.

“[Thelemann] did a great job today of facilitating our offense and bringing us together, spreading the ball out,” Burke said. “We’re excited to keep going and working hard.” 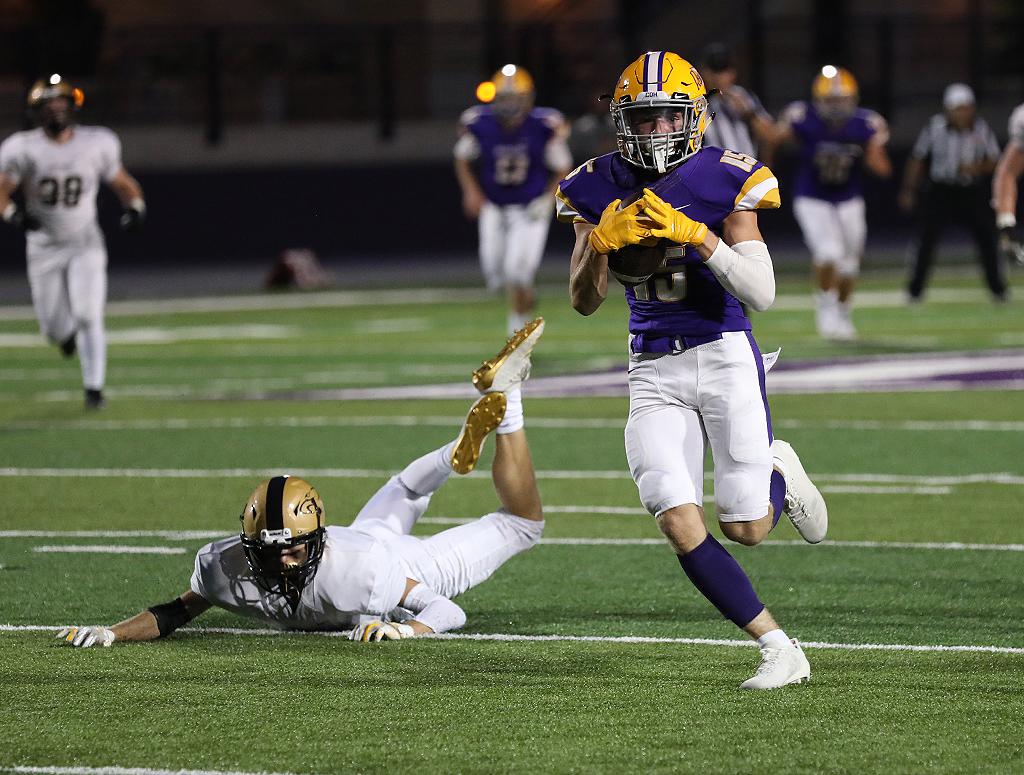 Cretin-Derham Hall's Tyson Schilling (15) breaks away from the last East Ridge defender on a 53-yard touchdown reception, giving the Raiders a 14-point lead in the second quarter. Photo by Cheryl A. Myers, SportsEngine

After being tied 14-14 through three quarters, Cretin-Derham Hall quarterback Preston Thelemann hit Marisellieo Mendez for a 51-yard touchdown down the right side on the first play of the fourth quarter, resulting in the Raiders going up 21-14. Thelemann finished 21 of 26 for 290 yards with two touchdowns, and completed passes to nine different receivers.

Jimmy Reardon kicked a 24-yard field goal with 2 minutes, 37 seconds remaining to give the Raiders (2-0, 1-0) a 10-point lead ending a drive that started with a fumble recovered at the Raiders’ 1-yard line.

Cretin-Derham Hall had a 14-0 lead, after getting a 10-yard touchdown run by Tony Underwood in the first quarter, and a 53-yard touchdown pass from Thelemann to Tyson Schilling in the second. Underwood finished with 17 carries for 33 yards and a touchdown.

The Raiders, ranked No. 7 in the Class 6A Associated Press poll, recovered three Raptor fumbles and twice scored on the ensuing possession. 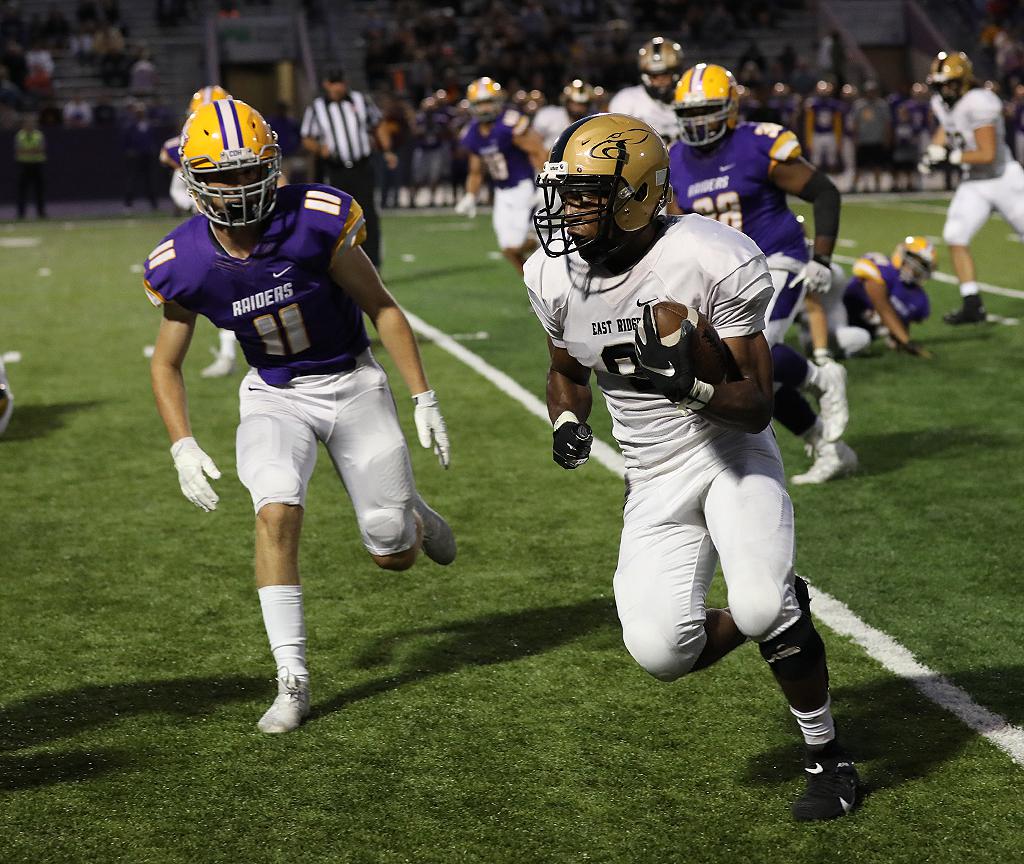 East Ridge running back KJ Moore (9) looks for an opening down the sideline on Friday night. Moore finished with 21 carries for 125 yards and a touchdown. Photo by Cheryl A. Myers, SportsEngine