His father, a former pro football quarterback, said his son, who helped lead Lakeville North to a Prep Bowl title, is “a need and a want’’ for the Cornhuskers. 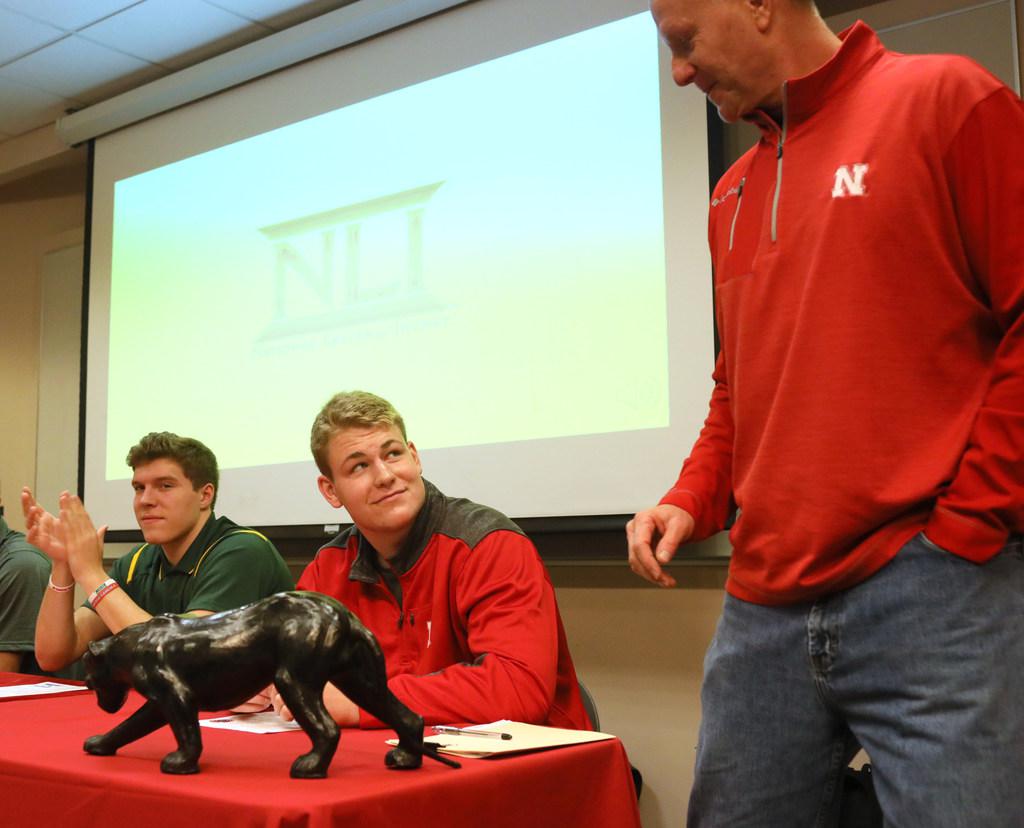 An emotional Gene Benhart paid tribute to his son, Bryce, who signed to play football at Nebraska. At left is Eli Mostaert, who will play football at North Dakota State with his twin brother, Will. Photo: David Joles * david.joles@startribune.com

With his right shoe, Nike size 15, sticking out from under the table and moving like a windshield wiper as he thanked family, friends and football teammates, mammoth Lakeville North offensive lineman Bryce Benhart showed public speaking isn’t his favorite.

Dominating the line of scrimmage with great size (6-9, 305 pounds) and athletic ability are his strong suits and the reason the nationally coveted Benhart signed with Nebraska in a ceremony Wednesday before classes at his high school.

Benhart, rated a 3-star (Rivals.com) or 4-star (ESPN) prospect, chose the Cornhuskers over Michigan, Tennessee, Wisconsin and the Gophers.

“Every time we went on a visit, my parents and I would come home and make a list and compare the colleges to see which had the better opportunity for me and for them, too, to come see me,” Benhart said. “And Nebraska felt like the perfect fit.”

Gene Benhart, a former quarterback who played a season with the Indianapolis Colts, said he helped his son craft questions for coaches and develop criteria for making a choice. In the end, Nebraska’s pitch won.

“Bryce was a need and a want for Nebraska, not just a luxury,” Gene said.

“I always told our kids that the best athletes were the five fat guys,” Gene said. “The offense did not run without those guys.”

His son grew into something special. With Benhart anchoring the offensive line, the Panthers rushed for more than 3,200 yards en route to a championship in November.

“He is a freak,” Gene said of his son. “There are not many kids that come around that are 6-foot-9 and can move the way he can.”

To Bryce Benhart’s right at the table inside a Lakeville North lecture room were twin brothers Eli and Will Mostaert. Both defensive linemen, they signed with North Dakota State University. Eli Mostaert, who previously planned to walk on, learned during a home visit last Saturday by new Bison head coach Matt Entz that he would receive a scholarship.

“I’m just happy they did that because they know how much I’m worth and what I can do for their program,” Eli said.

Those attributes also could be found in two-time soccer captain Jack Armitage. He signed Wednesday with Bradley University. Armitage missed his senior season with injury but became what coach Pete Tyma called “a fifth assistant coach.”