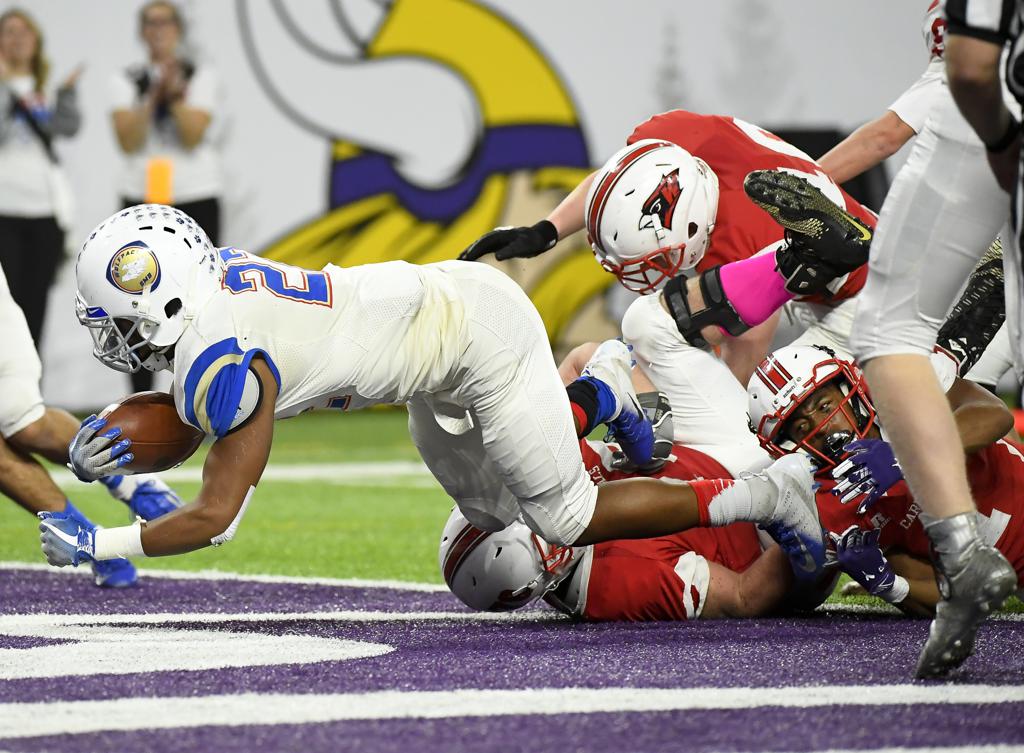 Notes from Friday at the Prep Bowl

Borrowing from Eden Prairie’s playbook, SMB coach Collin Quinn called nothing but running plays on the first three Wolfpack possessions Friday in the Class 4A final against Willmar.

“We thought if we could get the power run game going we could shorten the game,” Quinn said.

That meant a busier night for senior running back Siegel Howard. He finished with 33 carries for 104 yards and a touchdown. He more than doubled his average workload of 15 carries in his previous nine games.

Though frustrated by the grinding nature of the play calls, Howard kept pounding away.

“If there’s one guy that you want to give ultimate credit to for this team, Siegel Howard is the heart and soul,” Quinn said.

The Class 2A championship game Friday marked the third time this season that Caledonia had taken a 7-0 lead into halftime. The Warriors led Chatfield and Dover-Eyota by identical halftime scores during the regular season. On all three occasions, Caledonia finished the game by shutting out its opponent.

Warriors coach Carl Fruechte said the previous games may have played a role in Friday’s 21-0 victory but said his team’s ability to hold an opponent in check was more due to preparation.

“We talk a lot about being down and what we’re going to do. Are we going to freak out? How are we going to handle it?” Fruechte said. “We try to put ourselves mentally there. I personally believe that had more to do with it.”

Complaints from fans about seating accessibility during the football semifinals last week led the Minnesota State High School League and Whelan Security, which provides security at U.S. Bank Stadium, to make accommodations for fans during the Prep Bowl.

Originally, the league required fans to sit in the section assigned to their team. Complaints arose that fans arriving before the end of the previous game weren’t allowed into their seating area, in the lower bowl on either side of the field. Other seats were blocked off, so many fans were forced to mill in the crowded concourse on the stadium’s west end.

“It was mostly on the Delta Club [south] side of the field,” league media director Tim Leighton said. “There were pinch-points there and it was tricky maintaining the flow of people as a result.”

Whelan Security supervisor Bob Dannewitz said: “It was getting packed. I had to get on the horn to try to get this fixed.”

The rules were relaxed Friday to allow fans to access their seating area when they arrived. Sections 136 through 138 on the ends of the field were opened for the early games, with plans to extend those areas through Sections 141 if needed.

The high schools for Spring Grove and Caledonia, just 10 miles apart in southeast Minnesota, took the field in back-to-back games on Friday at U.S. Bank Stadium.

The NBC television crew for this Sunday’s Vikings-Packers game commandeered the television broadcast booth Friday at U.S. Bank Stadium, forcing broadcasters from Channel 45 into the nearby radio broadcast booth to announce the early games.

“The sight lines aren’t as good as in the TV booth, but it’s fine,” said Jim Erickson, who called the 2A final between Caledonia and Barnesville.