Zach Jungels led the Eagles with 233 rushing yards and two touchdowns as they claimed the program's fourth Prep Bowl title since 2010. 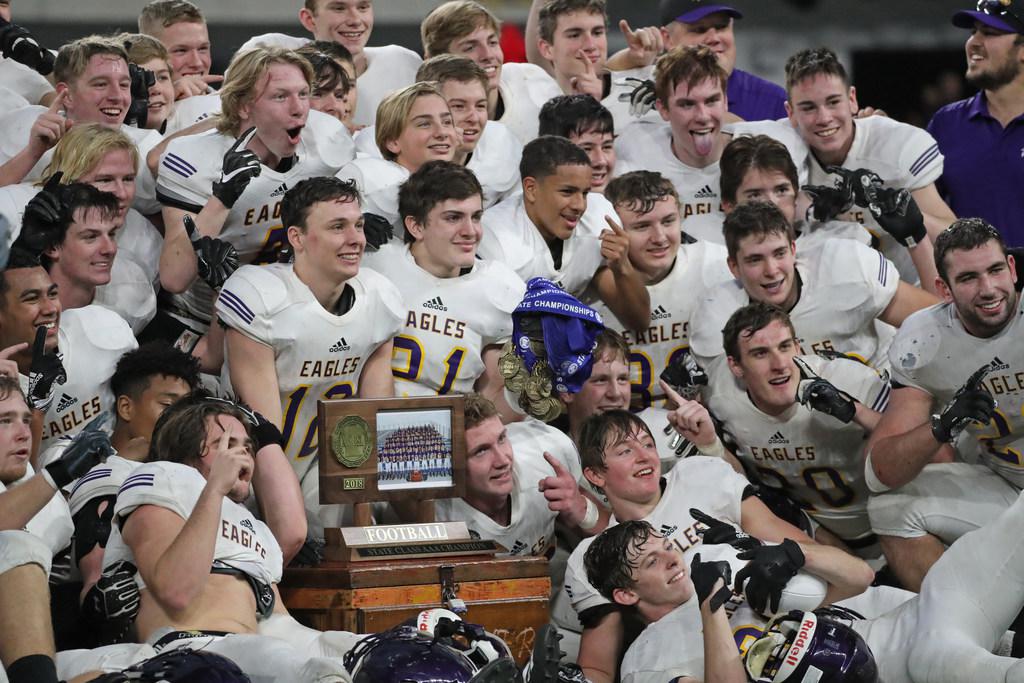 Known to teammates as “wild antelope man,” Rochester Lourdes senior running back Zach Jungels and his unorthodox gait were too much for Fairmont in the Class 3A Prep Bowl.

Jungels paced the Eagles’ 24-7 victory on Saturday by running 27 times for a season-high 233 yards and two touchdowns. Undefeated Lourdes (14-0) earned its fifth state title and fourth Class 3A Prep Bowl crown since 2010.

Playing up his what coach Mike Kesler called his class-clown persona, Jungels admitted nearly falling and fumbling on his game-breaking 50-yard touchdown run because he “was too excited. I saw a lot of green grass” at U.S. Bank Stadium. And that was before Fairmont defenders almost tackled him from behind at the 12-yard line.

Then teammate Pat Leary got serious, praising Jungels for setting the tone throughout summer workouts.

“If you want to talk about a guy that worked his buns off to get here — the most offseason preparation by far — it was Zachary Jungels,” Leary said. “We all fed off him in the offseason. He had the day he deserved today. He’s a fantastic player.”

Trailing 7-0 at halftime, Fairmont (11-2) tied the game with a 56-yard touchdown pass from Garrett Myren to Thomas Johnson. Then a trio of events swung momentum in Lourdes’ favor.

First, a 36-yard Ben Limburg field goal put the Eagles ahead 10-7. Then Fairmont, runner-up in 2011, fumbled its ensuing possession.

“We thought we had a chance,” Cardinals coach Mat Mahoney said. “But that turnover was pretty critical. And they started to wear us down.”

Jungels got loose for his 50-yard score early in the fourth quarter and Lourdes built a 17-7 lead. The Eagles’ option offense kept churning out yards and took control. Lourdes logged 327 rushing yards in the game.

“The O-line was wearing them down,” Jungels said. “They were getting a huge push off the ball. I would go three or four yards without even getting touched.”

Ironically, Jungels said, “One of their defensive players told me I run like an antelope.” 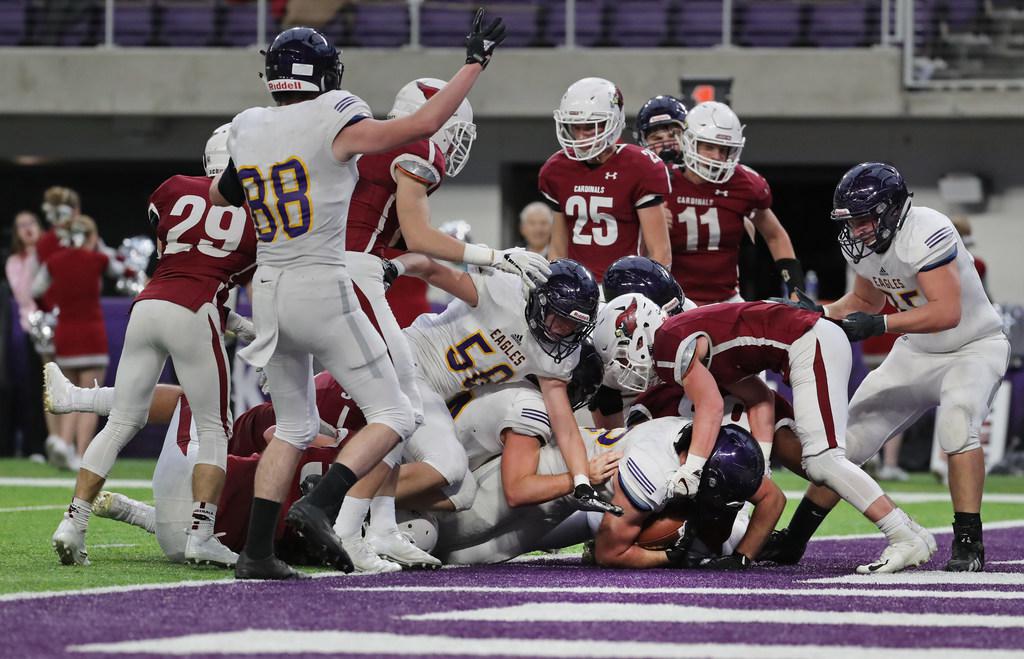 Rochester Lourdes earned its fifth state football title and fourth Class 3A Prep Bowl crown since 2010 with a 24-7 victory against Fairmont on Saturday at U.S. Bank Stadium.

The undefeated Eagles (14-0) pulled away on a 50-yard Zach Jungels touchdown run early in the fourth quarter.

Jungels, nearly caught from behind at the 12-yard line on his big run, led all players with 233 yards on 27 carries and two touchdowns.

The touchdown capped a trio of events that swung momentum in Lourdes’ favor. First, a 36-yard Ben Limburg field goal put the Eagles’ ahead 10-7. Then Fairmont fumbled its ensuing possession. And then Jungels got loose.

Trailing 7-0 at halftime, Fairmont (11-2) tied the game with a 56-yard touchdown pass from quarterback Garrett Myren to Thomas Johnson.

Check back later for more on the game and more photos.