Caledonia shuts out Barnesville for fourth consecutive 2A championship

The Warriors, extending their winning streak to 54 games, never allowed the Trojans into the red zone in a 21-0 victory. 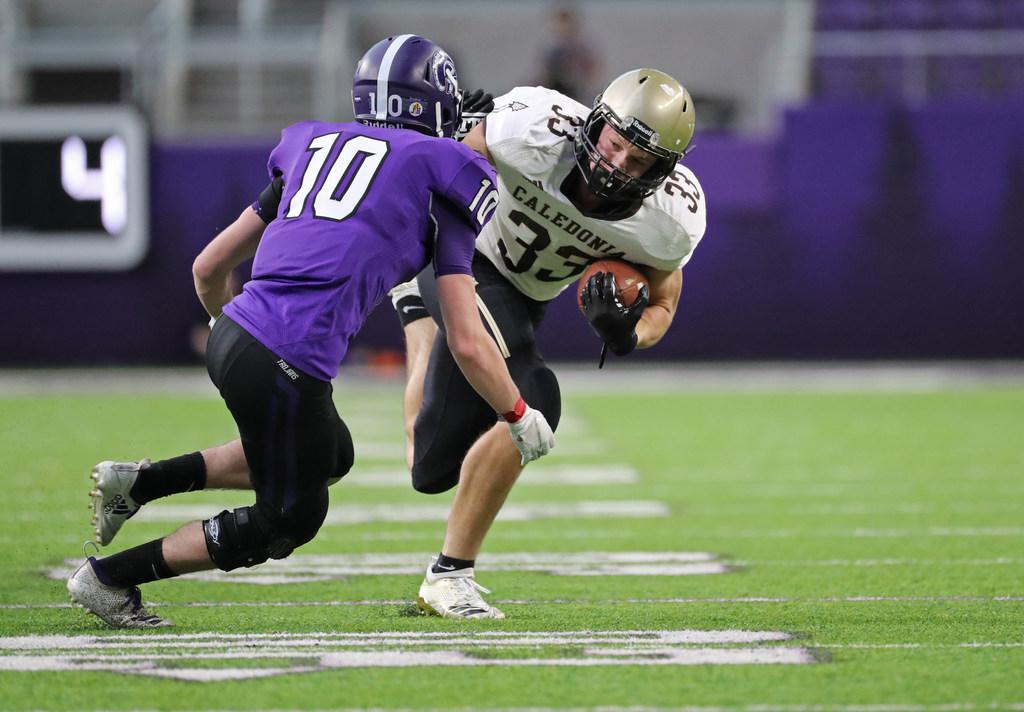 Caledonia running back Nick McCabe (33), who scored the Warriors' first touchdown, looked for a way to skirt past Barnesville's Kellen Hinsz in the first half. Photo: Shari L. Gross • shari.gross@startribune.com

There was a business-like feel among the Caledonia players after their 21-0 victory over Barnesville in the Class 2A championship game Friday. Maybe it was expectations, maybe it was winning a fourth consecutive title and 54th game in a row. Maybe it was that many of their games had been blowouts.

Whatever it was, the five players who sat at the post-game press conference podium barely cracked a smile. They were happy, but at Caledonia, winning is a way of life.

“It means a lot,” senior running back/linebacker Nick McCabe said. “We’ve watched other teams play and be successful. We set our goal to end up being number one.”

After dominating opponents offensively in each of the last three Prep Bowls, the Warriors turned to their defense this time around. They shutdown Barnesville’s hybrid wing-T/power-T offense by attacking the Trojans’ ball carriers. They allowed just 32 total yards in the first half, 132 yards overall, and never let Barnesville into the red zone.

“Our defensive line was playing hard and fast and was hitting the gaps,” said senior linebacker Evan Denstad, who led Caledonia with nine tackles, two of them for loss. “It freed me up to make tackles.”

After a scoreless first quarter, McCabe raced around left end for a 22-yard score with 4:53 left in the second quarter for a 7-0 lead.

Defenses for both teams controlled the action thereafter until Tate Meiners’ 1-yard dive with 4:29 left in the fourth quarter, giving Caledonia a 14-0 lead and some breathing room.

Caledonia iced the victory a minute later when Payton Schott intercepted a Barnesville pass and ran 43 yards for the game’s final score.

Barnesville coach Bryan Strand was understandably down about the loss, but pleased with his team’s performance.

“That’s the best dang team in the state — hands down, they’ve blown away everybody — and we were right there with them,” he said. “Our kids played as well as they could have.”

Some smiles finally crossed the faces of the Caledonia players when asked if they appreciated playing in a tightly contested game, something they haven’t often experienced.

“We couldn’t have asked for a better, more exciting game,” senior defensive end Ryan Wagner said with a grin. “This was just what we wanted, a tight game.”

Caledonia leaned on its defense, shutting out Barnesville 21-0 to win its fourth consecutive Class 2A state championship on Friday at U.S. Bank Stadium.

Nick McCabe scored on a 22-yard run in the second quarter to stake the Warriors to a 7-0 lead. They added a 1-yard scoring run by Tate Meiners in the fourth quarter for some breathing room before Payton Schott tacked on a 43-yard interception return for a touchdown.

Caledonia (13-0) held kept Barnesville’s offense in check all afternoon, never allowing the Trojans into the red zone, for its fifth shutout of the season.

It’s the ninth state title for Caledonia since 2007, the most of any team in the state over that span, and 10th overall. The Warriors ran their winning streak to 54 games.