A 10-yard touchdown run by Raja Nelson in the third quarter proved to be the difference in a back-and-forth 28-21 victory over Eden Prairie. 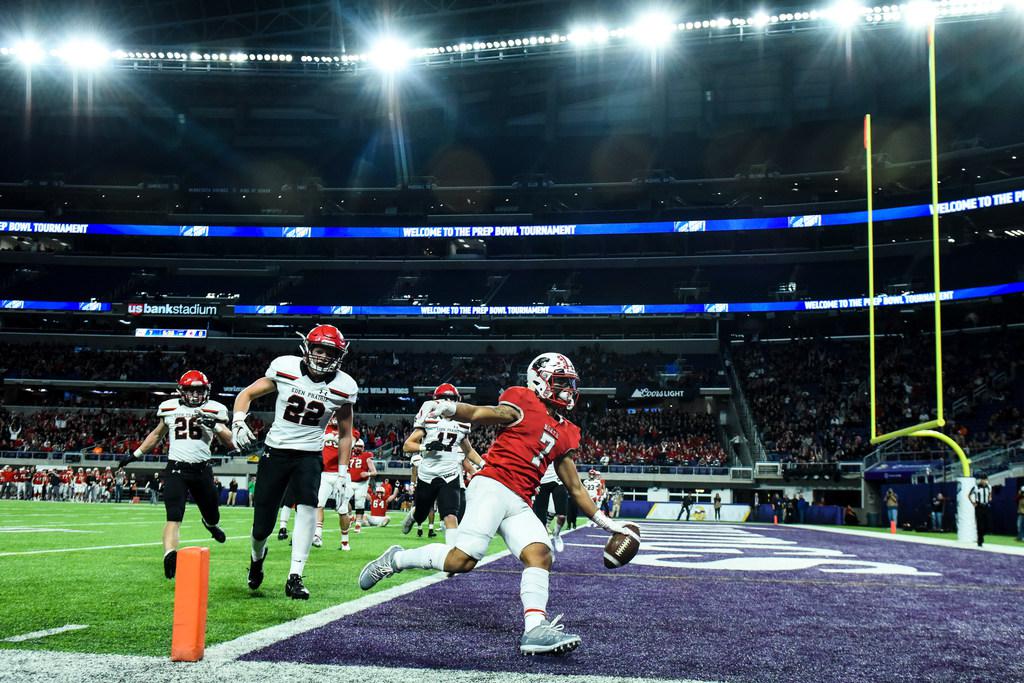 Back in August, before a game had been played, Lakeville North coach Brian Vossen knew that this was the year. If a championship was going to happen, this was the group to do it.

Lakeville North made Vossen’s premonition a reality Friday, getting unexpected offense in the first half and a stout performance from the defense in the second to defeat defending champion Eden Prairie 28-21 in the Class 6A championship game at U.S. Bank Stadium.

“I knew this season something special was going to happen,” Vossen said. “I knew this was ours. Today was maybe the first game in a long time that I didn’t have any nerves.”

The Panthers, who finished 13-0, gave up more big plays than expected, and even trailed 21-14 late in the first half, before settling down and playing the final two-plus quarters in a manner Vossen and his players had become accustomed.

The first half was remarkably entertaining for two teams not known for offensive fireworks.

Eden Prairie struck first. Lakeville North running back Brian Curtis Jr. fumbled on the Panthers’ second play from scrimmage and the Eagles took over at the Lakeville North 49.

Lakeville North responded with a 65-yard, 12-play drive, capped by a 5-yard dart around right end by RaJa Nelson, tying the game 7-7.

Soon after, Panthers quarterback Brennan Kuebler showed off an arm that had been kept under wraps for most of the playoffs after throwing just13 passes in four previous postseason games. His threw a perfectly placed deep ball to Keaton Mohs for a 73-yard score and a 14-7 Lakeville North lead.

Eden Prairie (10-2) answered with its own 65-yard scoring drive, tying the game on a short run by Felipe Izumi, The Eagles then took the lead the next time they had the ball when Jordan Amundson burst off right tackle and outraced the Lakeville North defense for a 80-yard touchdown and a 21-14 advantage.

“They mostly got all of their points off big plays. We just had to limit big plays,” said defensive end Will Mostaert, one-half of a chaos-raising duo, along with brother Eli, that Vossen called “our infamous twins.”

Perhaps the game’s biggest play occurred late in the first half. With Lakeville North trailing by a touchdown with halftime less than two minutes away, halfback Brian Curtis launched a 48-yard halfback pass to Nelson to the Eden Prairie 3-yard line. Two plays later, Nelson scored, tying the game 21-21 at the intermission.

“We gave up two long passes,” said Eden Prairie coach Mike Grant, whose team's only two losses this year were to Lakeville North. “If we don’t give up those, we win the game.”

Lakeville North took the lead for good in the second half on Nelson’s third touchdown, this time from 10 yards out, and then leaned on its defense the rest of the way.

“Aside from my two kids being born and marrying my wife, I don’t know if I’ve ever experienced anything that’s more exciting than this,” Vossen said. “I’m so proud of these players.” 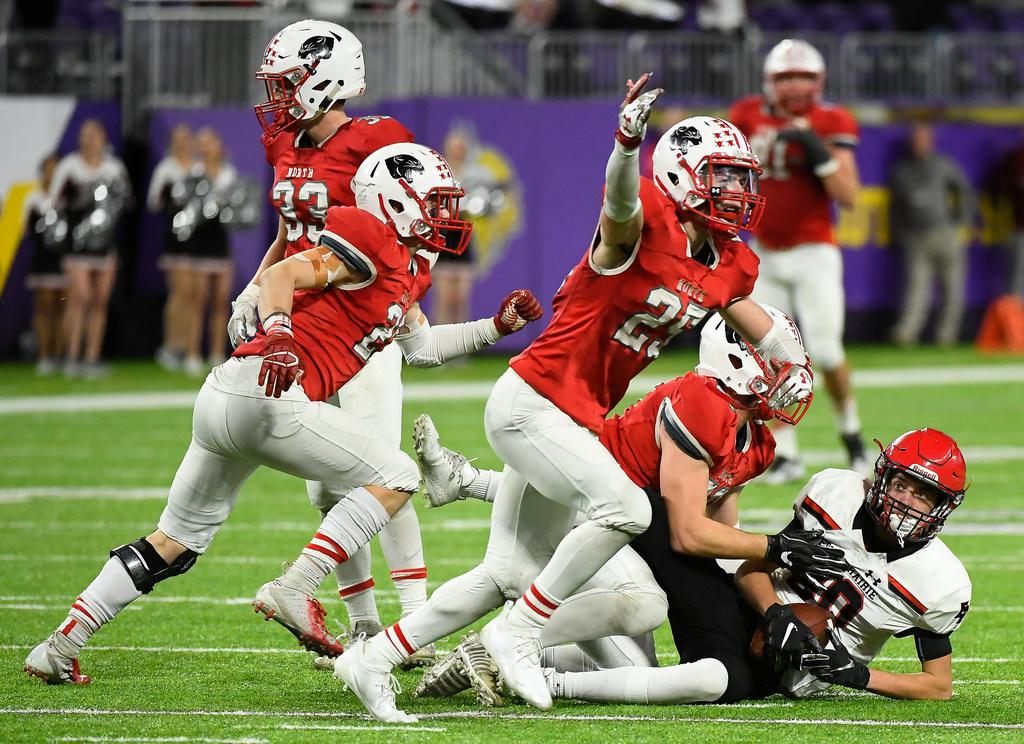 Lakeville North's Owen Dugan (25) celebrated with teammates after they tackled Eden Prairie wide receiver Cade Kramer (80) short of a first down on fourth down in the game's final seconds. Photo: Aaron Lavinsky * aaron.lavinsky@startribune.com

Expectations were that the Class 6A championship game Friday was going to be a coronation of Lakeville North’s first state championship, ending a season in which the Panthers had been No. 1 since Week 2.

Nobody said it was going to be easy.

Lakeville North (13-0) gave up more big plays than anyone expected and even trailed late in the first half, but found its game in time to defeat defending Class 6A champion Eden Prairie 28-21 at U.S. Bank Stadium.

No Lakeville school had won a state title since the district split into two high schools in 2005. The former Lakeville High School won three state championships, the last one in 2003.

The first half was remarkably entertaining for two teams known for methodical, grind-it-out drives.

Eden Prairie (10-2) struck first, taking advantage on the first break of the game. Lakeville North running back Brian Curtis Jr. fumbled on the Panthers’ second play from scrimmage and the Eagles took over at the Lakeville North 49.

Lakeville North responded in a fashion typical of its season, a 65-yard, 12-play drive, all on the ground. Nelson capped it by darting five yards for a score, tying the game 7-7.

Quarterback Brennan Kuebler showed off an arm that had been kept under wraps for most of the playoffs after throwing just 13 passes in four previous postseason games. He threw a perfectly placed deep ball to Keaton Mohs for a 73-yard score and a 14-7 Lakeville North lead.

Eden Prairie answered with a methodical 65-yard drive of its own, tying the game on a short run by Felipe Izumi. The march benefited from a questionable pass interference call in Lakeville North.

The Eagles regained the lead the next time they had the ball. Jordan Amundson burst off right tackle and outraced the entire Lakeville North defense for a 80-yard touchdown, giving Eden Prairie a 21-14 lead.

The back-and-forth wasn’t done yet. A 48-yard halfback pass from Curtis to Nelson set up a short scoring run by Nelson in the final minute of the first half. The teams went to halftime tied 21-21.

The second half began with the same sort of entertaining flourish that characterized the first half. It began when Eden Prairie’s Collin Penn stripped Curtis of the ball and recovered it at the Eden Prairie 37.

On the next play, Panthers defensive lineman Eli Mostaert took the ball from an Eden Prairie ball carrier, setting up a 10-yard scoring run by Nelson, his third of the game, and a 28-21 lead.

Lakeville North converted a fourth-and-5 situation in the process. At that point, the Panthers were a perfect 3-for-3 on fourth-down conversions.

The pace slowed after that, with the teams trading punts. Lakeville North’s defense, its calling card all season, forced Eden Prairie to punt on four consecutive possessions.

Eden Prairie had one final possession that began at the Lakeville North 35-yard line following a short punt, but the Panthers forced the Eagles to turn the ball over on downs in the final half minute when a fourth-down completed pass ended short of a first down.

Lakeville North defeated Eden Prairie 14-0 in the second week of the regular season.

Check back later for an updated story.